We all have a need to take notes from time to time. Whether it’s to use as a reminder to remember the act of picking up a gallon of milk from the store on the way home from work(I know… cliche.)or to keep our grocery list on hand while we go shopping for the next few weeks, notes are great to have no hand. In the digital age of smartphones and tablets, even note taking has gone digital and since our smartphones are generally something we always have on us, keeping our notes on our smartphone so we have access to the where ever we go seems like a smart solution. We thought it fitting to pit together two of the most popular note applications out there on Android, with Google’s very own Keep application, and the veteran, Evernote. Both apps have some similarities and both are actually wonderful note taking apps. We’ll summarize each one and at the end you can vote in the poll for your favorite. So, who deserves the crown? Evernote or Google Keep? 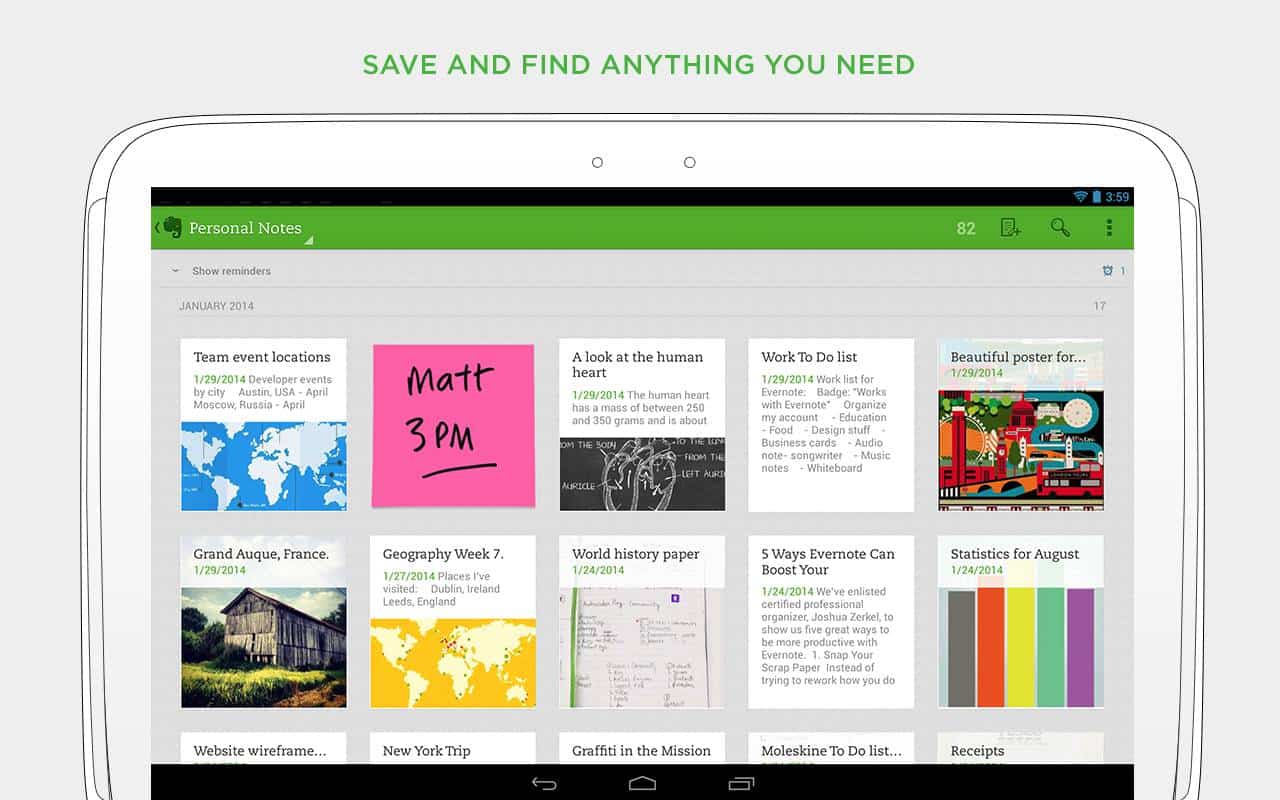 Evernote is one of those apps that has been around for so long it’s almost impossible to ignore it. Even if that was the only reason people paid attention to it, it would still get a lot of downloads because it’s well known. Evernote offers up many great features though which is why it has been one of the favorites among users who have a need to keep notes handy for as long as it has. While not an uncommon feature among these types of apps, Evernote lets you sync all your notes accross virtually all your devices where you use and have access to your Evernote account. Everything gets stored in the glorious cloud and thus you can see your notes anywhere you have access to the web. Google Keep has this as well of course, but this is still a great feature of Evernote. Evernote also lets you sketch or handwrite out your notes, so if you simply hate to type and will just be writing small little notes to yourself or others, handwriting them out is a nifty little way to jot them down.

Even though notes can help us stay on top of things, we might end up keeping too many notes on hand, and even notes can have a need to be organized. Evernote lets you organize your notes by notebooks and by tags so you can always easily find what it is you need. If you’re a social butterfly, you can also save your tweets to Evernote and email the notes that you want to send to others. Evernote also works with Evernote Business, letting you integrate the two fully to keep work stuff close at hand. Even though Evernote is a great note application because it can sync across devices, if you have Evernote Premium you’ll be able to take your notebooks offline for access anywhere even when you don’t have an internet connection. You can also add a PIN lock to your Evernote app to keep things secure, and you can allow others to edit your notes, which might come in handy if you like to share. Evernote is free to download, but you can purchase the premium version in app for some more useful features. 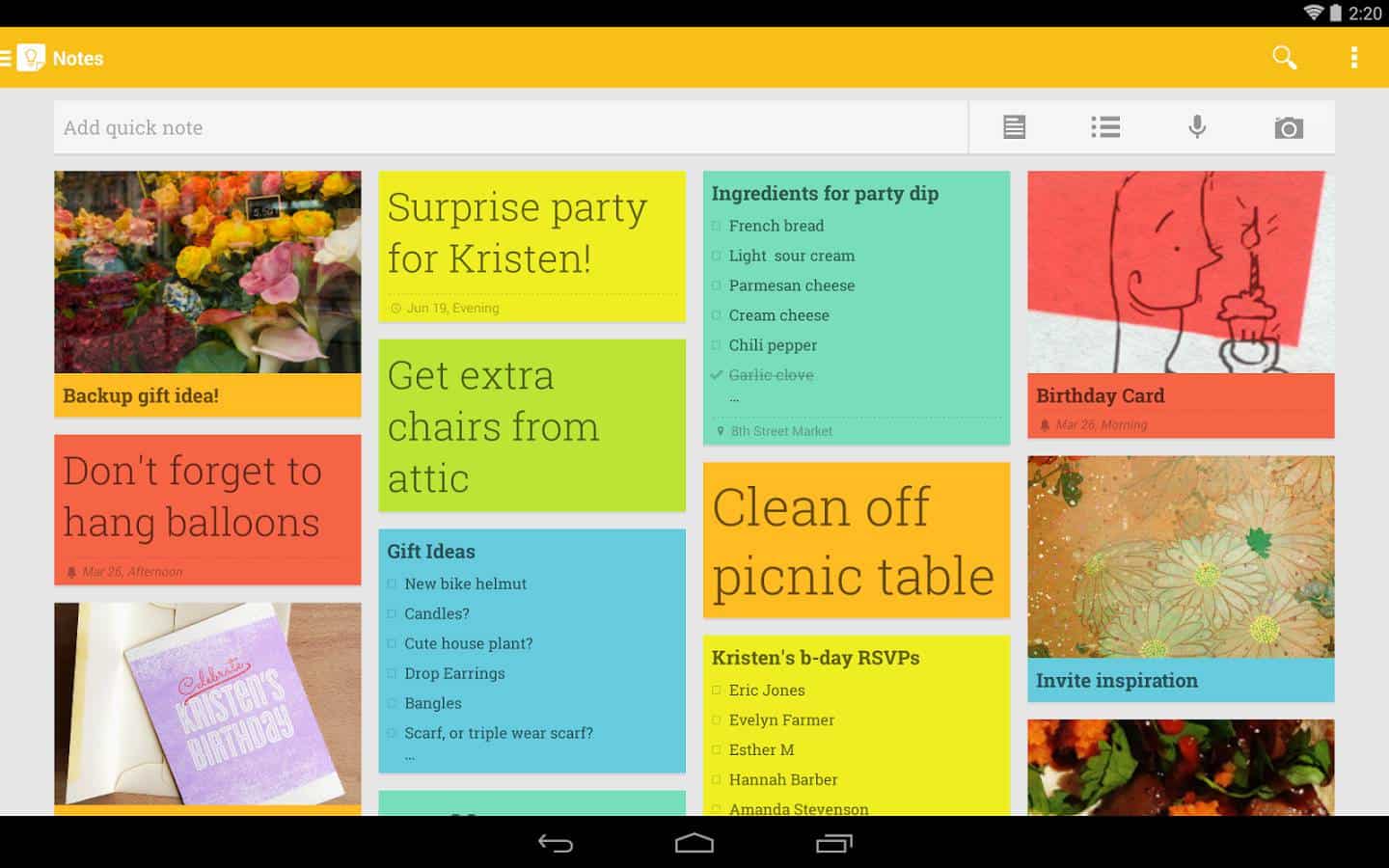 Just like Evernote Google Keep will sync all your notes across all of your devices, as Google Keep works on smartphones, tablets and computers. So no matter where you are or what device you’re using you can access your notes. You can save notes, lists and photos to Google Keep, so if you just need to write yourself a quick note as a reminder or if you have a list of to-do’s for the day, you can store both within Keep. Find some interesting things you want to show others while you’re out and about? Snap a picture, save it in Google Keep and then access it later when you’re with friends or family you want to share it with. Since Google Keep is a Google app, like all other Google apps it’s tied to your Google account and there is no extra setup required past installing the app and opening it up. With Evernote, you’ll need to set up an additional account or link it to one that you already have to sync things.

Sometimes typing or handwriting notes isn’t always an option, because we can’t always be hands free. Google Keep lets you speak your notes to it and then Google will transcribe it and store the note for you to check later on. No typing or writing needed, allowing you to stay hands free and make a quicker note. Google Keep can help you stay organized as well, by color coding the notes that have to do with different things so you always know which ones are which. Instead of separating things out into different tags, notebooks or folders, just look for the correct color.

Two amazing note applications, only one winner. One has the ability to transcribe your notes for your by speaking them, the other lets you share notes with others so they can edit the notes you’ve taken. Both sync across all of your devices. Who deserves the crown? Who is the king of these two awesome note taking apps? Decide in the polls below.