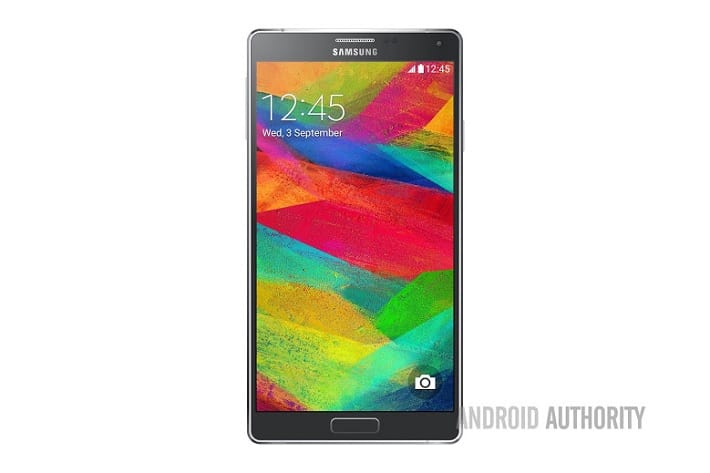 We're inching closer and closer to the Unpacked 2014 Episode 2 event next week. And there's a brand new render that has leaked out this afternoon. Our friends over at Android Authority got their hands on a brand new render, that is hard to tell whether it's fake or not. It looks a lot like the device that GSM Arena got their hands on earlier this month, but that doesn't mean it's not an early prototype or a fake. You'll also notice that the wallpaper on this render is the one that Sammobile leaked out yesterday. Which gives it a bit more credibility but not much more.

It looks a lot like the Galaxy Alpha and Galaxy Note 3 mixed together. As you can see the corners are a bit more flat and instead of curved. It also looks like we've got the metal frame as the Galaxy Alpha has as well. it looks like a good device, but we'll have to wait to see if it is really real. As we know from the Galaxy S5, we may not see the final design until the day of or day before the Unpacked event in Berlin. For those wondering, Samsung's Unpacked 2014 Episode 2 event starts on September 3rd at 3pm Berlin time. For those in the US that's 9am ET, and 6am PT. We'll be covering this event as we always do so make sure you stay tuned to Android Headlines.

As far as specs go, we're looking at a 5.7-inch 2560×1440 resolution AMOLED display, Qualcomm Snapdragon 805 processor, 3GB of RAM and 32GB of storage. We've also heard it'll have the same 16MP sensor as the Galaxy S5 had earlier this year. Basically, it's going to be a beast and we definitely can't wait to see what else Samsung has under wraps to show us next week. How many of you are excited for the Galaxy Note 4? What do you think of this render? Let us know in the comments below.