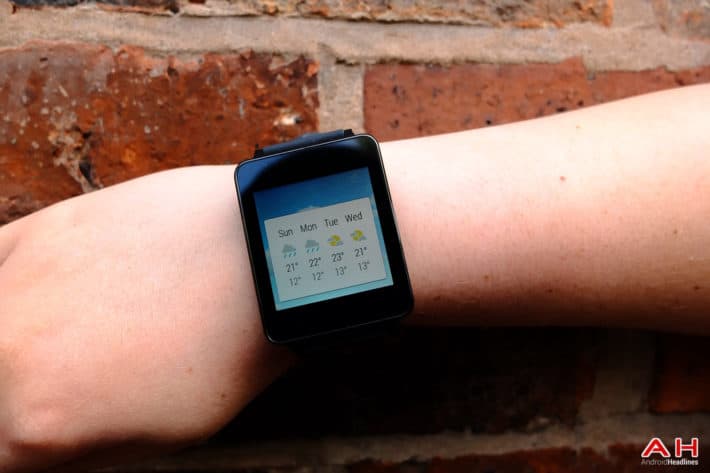 At the Google I/O a few months ago, Google announced an OS that was designed to run wearables called, appropriately, Android Wear.  Also at at the same conference, both Samsung and LG announced smartwatches that were already running the new OS – the Gear Live and the G Watch.  Right now you can buy the LG G Watch in the Google Play Store for $250, but LG has just told our source that they will be bringing the new G Watch to Canada, starting with carriers TELUS and Videotron sometime the first of August…and word is it will cost the same $250.  It looks like Black will be the only color for now and LG also said that they will be working on getting the G Watch to the big box stores, such as, Best Buy and Future Shop.  From what they are saying we should eventually see the G Watch offered on Rogers and Bell as well.

The LG G Watch is really a very plain and simple design – steel back and frame covered completely with a polycarbonate front and sides, totally sealed – hence its IP67 water and dust certification.  It also has the standard 22mm strap width, so it is easily replaceable with an aftermarket strap…especially if you do not like the silicone-based strap that comes with it.  While Android Wear is in its infancy, it still does a good job and will certainly improve with time – same goes for the available apps – there are enough to keep you busy, but rest assured more will be coming very quickly.

What is nice about Android Wear is that it will work with ANY Android smartphone running Android 4.3 Jelly Bean or higher.  It will allow you to receive all of the same notifications that your smartphone will receive – eBay, Facebook, Hangouts, Twitter, SMS, etc.  The Android Wear also uses Google Now, so you can do the "OK Google" commands and see the results on your wrist – in our review of the G Watch, Tom found the voice recognition to be very accurate.  The G Watch doesn't have the Heart Rate Monitor of the Samsung Gear Live, but you can count your steps for the day if you are a fitness freak.  The battery will need charged about everyday and the display is a little hard to see in direct sunlight, but it looks like LG's first attempt is a good one that can only get better with time. Please hit us up on our Google+ Page and let us know if the LG G Watch is something you are looking forward to purchase…after all, it is a $250 decision.