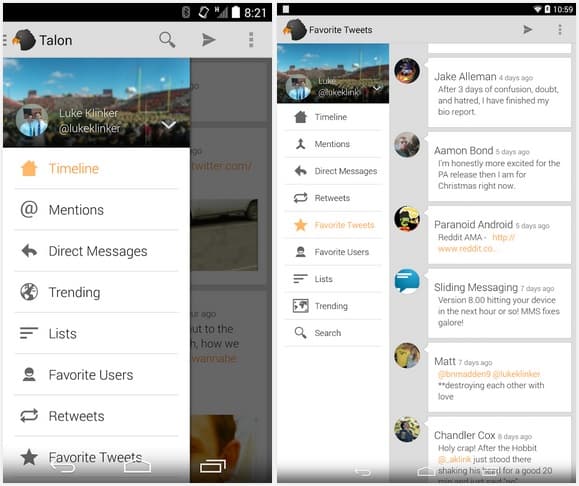 Now that Android L and Material Design have been unleashed upon the world, developers are going to start updating their apps. Talon for Twitter is the latest to do so, but this update comes with a twist. It’s not just a new theme for the app. It’s an overhaul that requires the new Android L to even install the updated app.

The updated Talon for Twitter app features a newly updated timeline view and tweet view, in addition the general Material Design face lift. Luke Klinker, the lead developer for Talon for Twitter, has released an early version of the updated app with the Material Design UI. You can download it here. Like I said, you’ll need to be running Android L or the app won’t install. It’s also an early preview build, so Klinker isn’t looking for any feedback or bug reports. It’s just something to play with as we get closer to an actual Android L release sometime in the fall.

The current Talon for Twitter app is pretty solid, and if you haven’t checked it out, you should. It’s a pretty feature packed Twitter app, and it’s only $1.99. The app on the Play Store was last updated on June 22, and it’s currently sporting KitKat stylings with light and dark theme options. There’s a theme engine, too, so you can roll your own Talon theme if you want. Some of the other custom features include ‘Talon’ and ‘Hangouts’ options, custom text sizes, a night mode, and custom notification settings. Talon is a relative newcomer to the Android Twitter app game, but it’s come on quickly and it’s a solid option. We’re going to start seeing this happen a lot as devs get ready for Android L and the Material Design UI guidelines. Some devs will release early or beta previews of their apps for us to check out, but all of them are going to be working hard to get their apps in line with what Google is doing.