evleaks is well know for leaking images and details about upcoming devices, and yesterday he leaked an image of an apparent upcoming phablet device to be hitting the T-Mobile network here in the states coming from ZTE. Yesterday there wasn’t any sort of detail about the device short of that we knew it was for T-Mobile’s network due to the T-Mobile Visual Voicemail app that was installed on it, and it appeared to be running Kit Kat due to the white status bar icons that are part of the Kit Kat design guidelines.

Today we actually have some leaked specs to go along with that picture that was taken by presumably a T-Mobile employee and sent in as a tip, and a possible name of the device to be thanks to Tmo News. The yet unreleased ZTE phablet that seems to be getting tested on Big Magenta’s network is said to be called the ZTE Olympia Z970, and it does indeed appear to be running Kit Kat version 4.4.2. The device is also reportedly coming along with a 6-inch display, and an 8MP camera on the back of the device. That leads us to believe that our assumption yesterday about it being a little more on the low end when it comes to pricing is more true. There is no word on the resolution, but if it turns out to be a low cost phone then it will probably have a resolution that reflects the cost.

The phone comes with some pretty thin bezels which is nice, and according to the source the phone is made mostly of plastic and takes on a brushed metal design similar to what LG did with the G3 on the back. It’s said to have a non-removable battery with an enclosed unibody design, although the specifications of the battery are not known at this time. The video recording from the rear camera is capable of 1080p, and as far as the front camera goes it sits at a low resolution of 0.9MP which seems to make it designed more for video chat than anything that begs for a quality image resolution. The device is thought to be launching soon although we have no exact date, just that the testing phase has already reached a 2-3 month time period which could suggest a near release status. 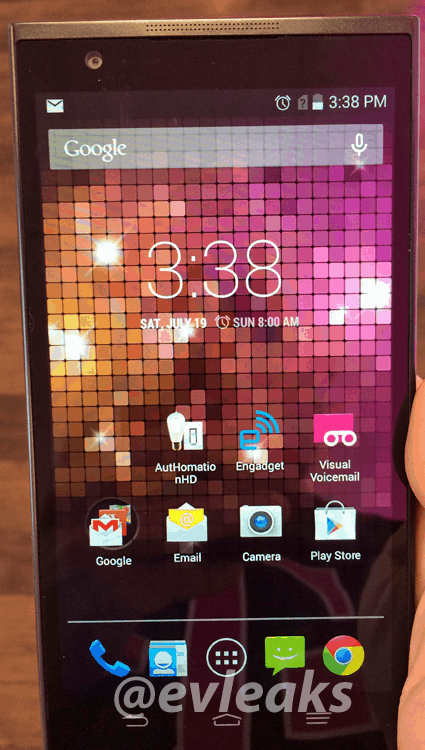