Here is our first comparison with a Qualcomm Toq – the first and only smartwatch by the popular designer of the Qualcomm Snapdragon processors that are used in most of the top flagship smartphones – Samsung, LG, HTC and more.  Qualcomm only designs its processors and lets others actually build them, so it is a little strange that they chose to make a smartwatch – not only design one, but also to manufacture the device.  Not only is this a strange device for a chip designer, they only expect to sell “tens of thousands” – like it was just a low-production collectible and we have to wonder if there will ever be a Toq 2.

In this article we will compare one of the new Android Wear smartwatches, the Samsung Gear Live, against the Qualcomm Toq.  Both of these devices have a few similarities and a few oddities – like the Samsung Gear Live smartwatch has a Qualcomm Snapdragon 400 quad-core processor powering the device, yet the Qualcomm Toq has an ARM Cortex-M3 running its show.  They both have 512MB of RAM, but we were unable to determine how much memory the Toq has for internal storage…the specifications of the Toq must fall in the same category as Top Secret documents – they are very hard to find, but we did what we could to complete the specification listing.

Please take a look at the specifications below and compare these two devices and then we will look at each individual smartwatch and list the pros and cons to help us determine which smartwatch will win this comparison. 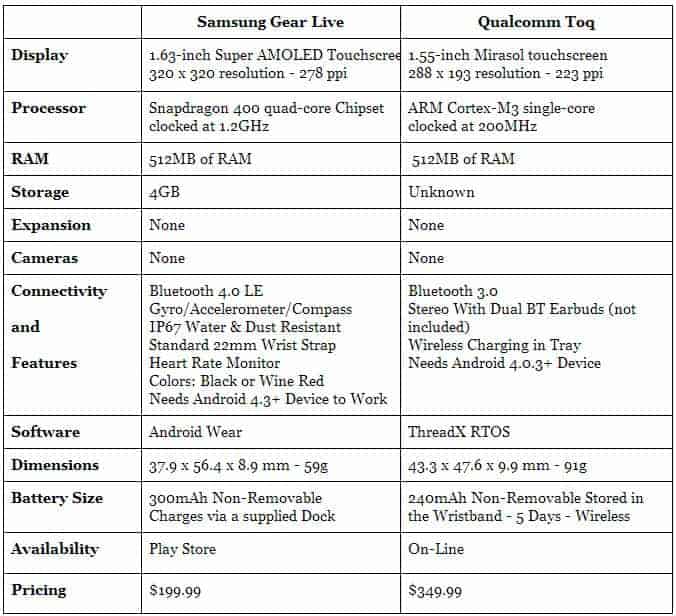 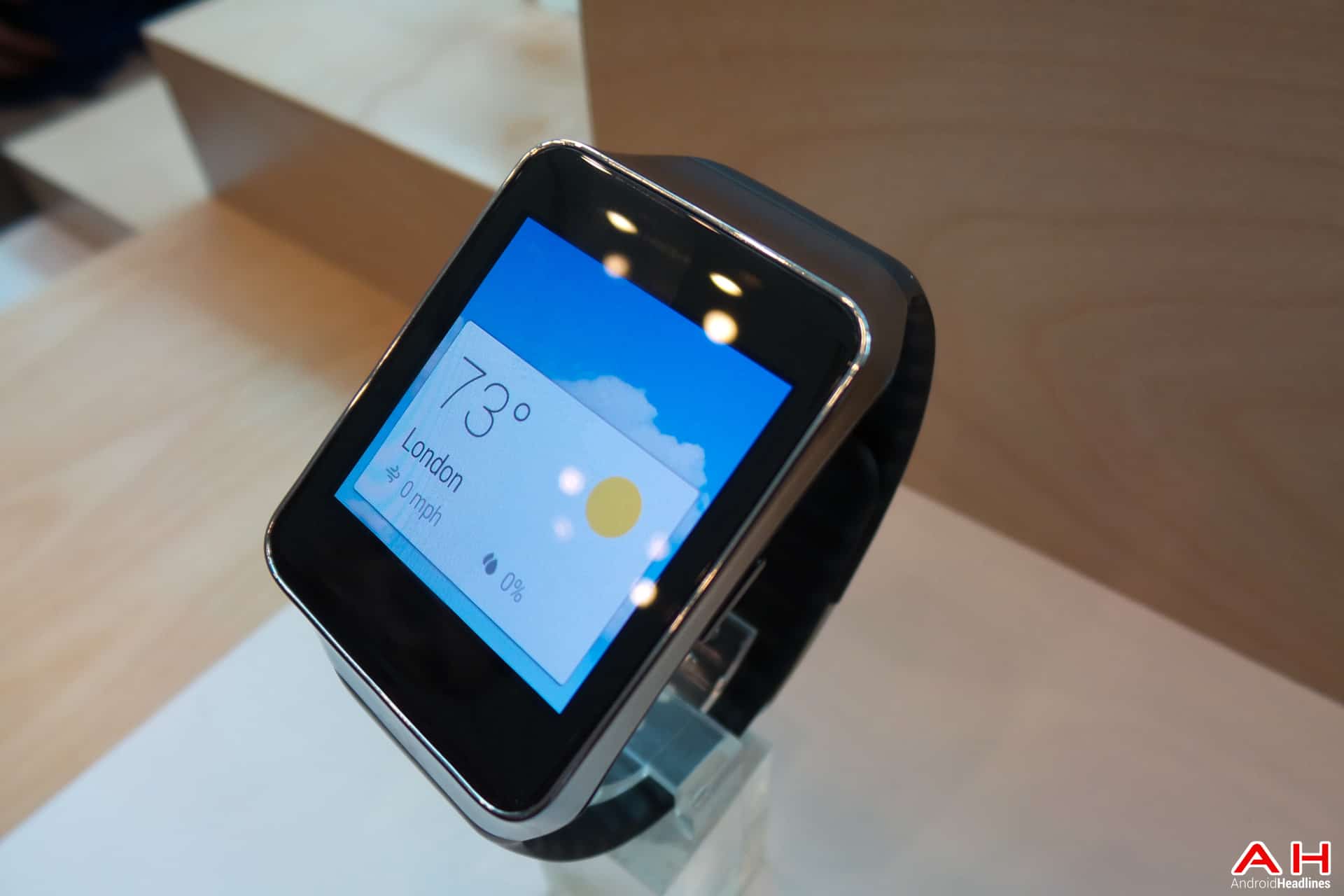 The Samsung Gear Live was a real surprise at the Google I/O convention – especially since they came out with the Gear 2, Gear 2 Neo and the Gear Fit, all running the new Samsung Tizen OS – it was a real pleasure to see Samsung embrace the Android Wear OS and also produce the Gear Live.  For now we have the Gear Live and the LG G Watch running the new Android Wear OS, and soon we shall also have the highly anticipated Moto 360, but others are talking about entering the smartwatch field thanks to Google providing the software.  It is all part of Google’s attempt to create their own ecosystem and have all devices with the same interface communicating with one another.

The Gear Live has a larger display – 1.63-inches versus Toq’s 1.55-inches – and a higher resolution.  Samsung also uses their AMOLED technology while Toq uses their Mirasol technology – while the Gear Live is full of vibrant colors compared to the dullness of the Toq, you can see the Toq’s display in full sunlight, while the Gear Live’s is much more difficult.  The Qualcomm Snapdragon 400 quad-core processor in the Gear Live is a lot of power for a smartwatch, as is the 4GB of Internal Storage.  The Gear Live is also using the latest Bluetooth 4.0 LE, which allows it to connect to the newest low-powered BT devices.  It also uses the standard 22mm wrist strap, so it is easily replaceable.  Following its ‘big brother,’ the Gear 2, the Gear Live also sports a Heart Rate Monitor.  The Gear Live will work with any Android smartphone running Android 4.3 Jelly Bean or higher.  It can be purchased in Black or Wine Red, is 37.9 x 56.4 x 8.9 mm in size, and weighs in at 59 grams versus the 91 grams of the Toq.  Although the 300mAh battery is larger than the Toq’s 240mAh, because of the low power consumption of its display, the Toq will easily outlast the Gear Live.  Coming in at $200, the Gear Live is considerably less than the $350 of the Toq. 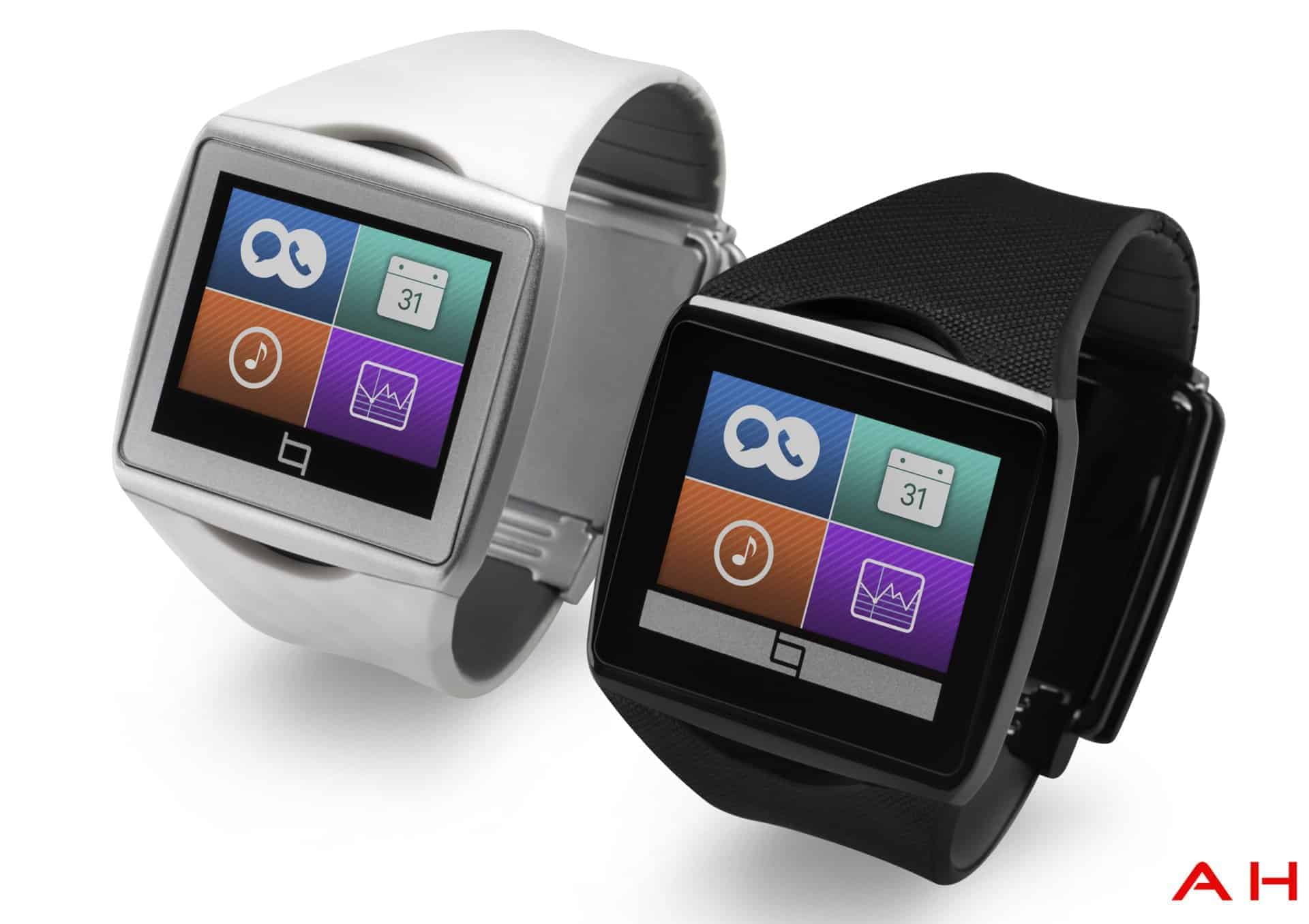 The Qualcomm Toq is more of a showcase smartwatch – not really intended to sell millions, but to show what Qualcomm’s Mirasol display technology is capable of for future devices.  The device still bears comparisons to the other devices on the market, especially a new Android Wear device like the Samsung Gear Live.  There are a few very distinctive features surrounding the Toq – first is the display, as it is a new technology, described kind of like the a colored e-paper display found on the Kindle or Pebble Steel – very readable in the direct sunlight, but it does have a washed-out look to its colors.  Secondly, because of the low power requirements of the display and the single-core processor, the small, 240mAh  – built into the wrist buckle – will last about five full days!  Thirdly, the wireless charging is effortless using the charging ‘tray’ supplied with the device – simply lay the watch and up to two earbuds in the tray and they will charge.  Lastly, it will produce stereo sound hooked up to its two earbuds – not included – through its Bluetooth 3.0 connection.

The Toq will work with any Android smartphone using Android 4.0 Ice Cream Sandwich or higher and connects via Bluetooth 3.0.  The Toq comes with eight “applets” on its home screen – Comm Hub where contacts, call and text functions are performed – Calendar where your smartphone’s events and details will show up – Music Player where you can pause, resume and change the track backwards or forwards…it cannot be used to pick songs – Weather is a no frills area that shows the current temperature and conditions – Stocks will ‘ticker’ away for you, but you must pick your stocks with your Android device – Status shows battery life, if there is a phone connected, if the ringer is on and even a ‘Find Phone’ button – Settings, what few there are, and – Notifications where you can page through them…to actually dismiss them, you must do that from your smartphone.  At $350, it is the most expensive smartwatch to date. 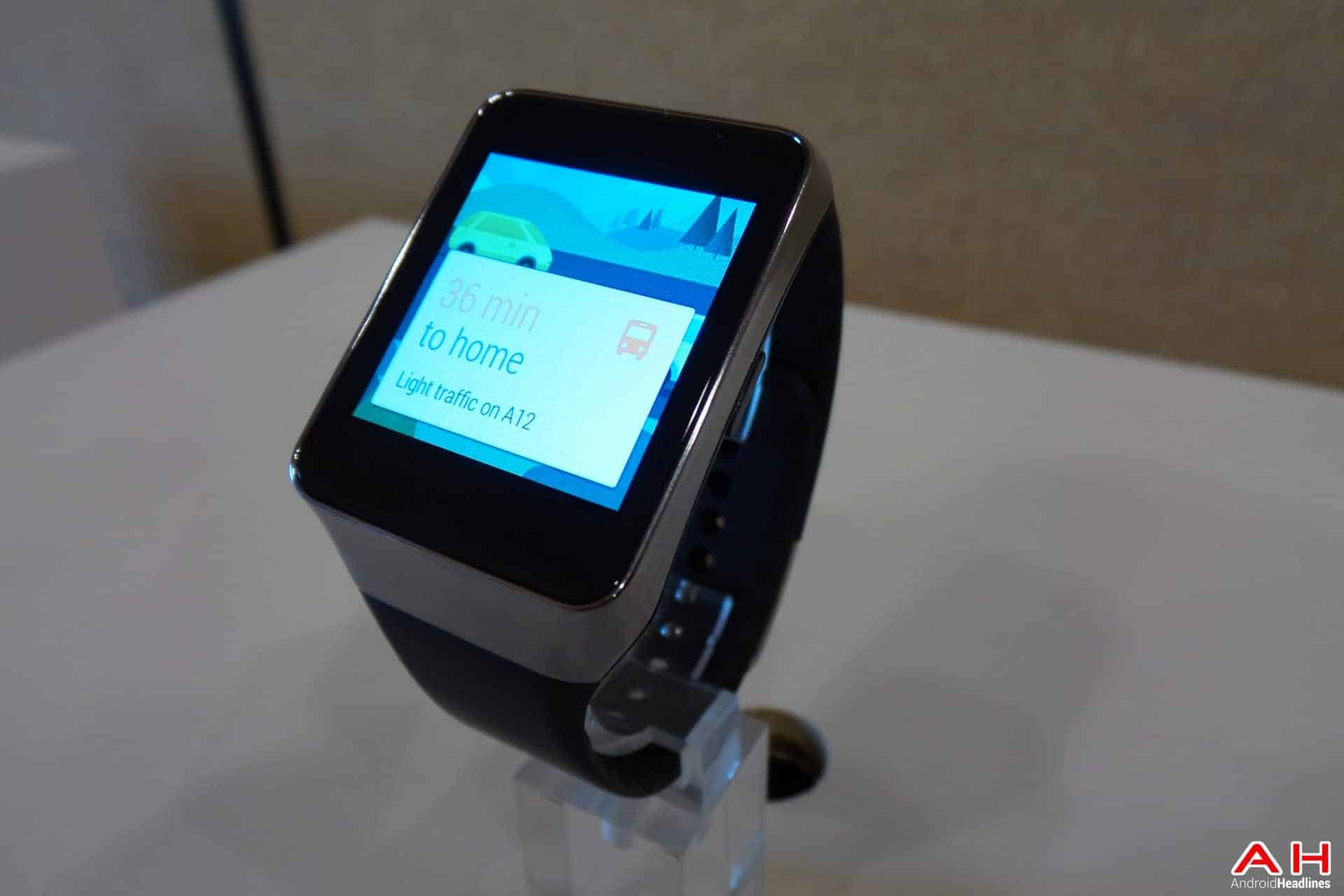 This is a fairly easy one to decide and our nod goes to the Samsung Gear Live.  For starters, it is cheaper by $150 and it can simply do a lot more for the money than the Qualcomm Toq.  The Toq is very limited in what it can do, although what it does do, it can handle very well and in bright sunlight – but once you are out of the sun, the AMOLED display just looks so much nicer.

Another big factor is the Gear Live’s ties to Google – with Google Now on the smartwatch, it opens up a whole new set of rules and gives it so much more functionality than the Toq.  As a simple example, the Music Player – in the Toq you can only work it when it is already up and running on your smartphone, and even then you can only pause, skip, or jump back.  With the Gear Live you have much more control of the music player on your smartphone.  It has more applications (and many more coming), support from Google and Android Wear.  It also has the Heart Monitor for those that want it, the newer Bluetooth 4.o LE, and an IP67 certification for water and dust resistance.

The Samsung Gear Live is cheaper, better looking, more colorful display, more functionality, more features and will be around long after the Qualcomm Toq is ‘retired’…did I mention it was cheaper?  Please hit us up on our Google+ Page and let us know what you think about these two devices…as always, we would love to hear from you.