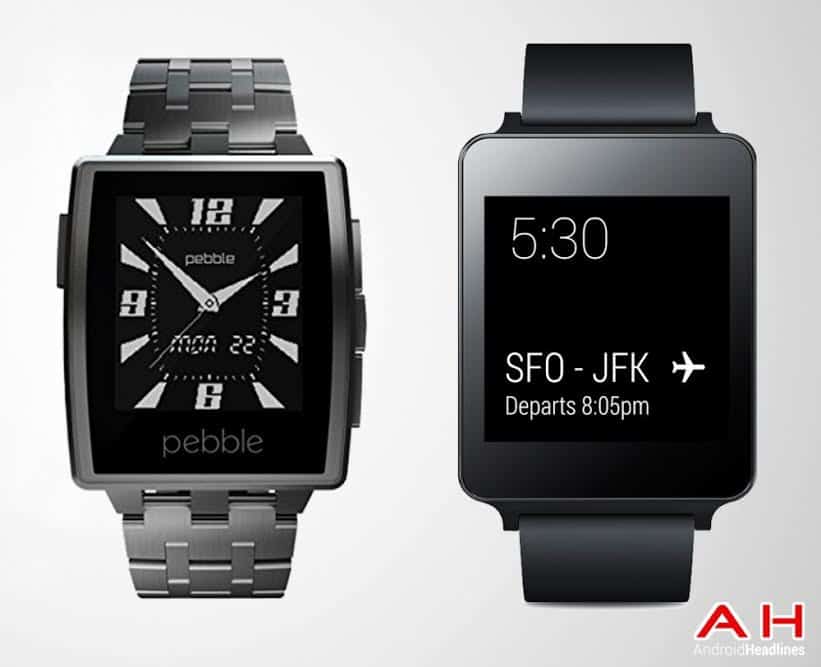 Here is a comparison that needs to be done – the infamous Pebble smartwatch, the Pebble Steel in this case, versus the new comer, the Android Wear powered LG G Watch.  How does the ‘old’ world stack up to the ‘new’ world in the smartwatch arena – which one offers the most features and best specifications for the money?  Other than the fact that both watches will tell you the time, these watches are as different as night and day in the specs department.  They do not even come close to being the same size, let alone the displays, processors, memory or even the battery.  They are, however, very similar in price – the LG G Watch is going for $229 and the Pebble Steel, their most expensive design to date, is running $249.  If we press it, we can find they both use Bluetooth, the necessary accelerometer, and are both water and dust resistant. These two smartwatches were not even developed in the same way.  The Pebble was crowd funded by a Kickstarter campaign in April 2012 and was finally released in July 2013 and sold by Best Buy – it was sold out in five 5 days and as of March 2014 has sold over 400,000 devices.  The Pebble is compatible with both iOS and Android and when connected to a phone it can receive vibrating alerts for text messages, emails, incoming calls, and social media accounts.

The other smartwatches by Samsung, Sony, LG and soon to be added to the list, Motorola, were all developed in-house the usual way.  Samsung started with their ‘Samsung only’ devices, the Galaxy Gear and quickly followed up with the Gear 2, the Gear 2 Neo and the Gear Fit – again, all needing a Samsung smartphone to properly work.  Then, at the recent Google I/O, they announced a new Android for wearables – Android Wear – and quickly Samsung and LG jumped on board.  The LG G Watch is LG’s first attempt into the smartwatch field…just how well does it hold up as the ‘new kid on the block,’ especially up against the original company that started it all – or at least the excitement – Pebble and their newest model, the Pebble Steel.

Please look over the complete list of specifications below and see just how little these two devices – both smartwatches – differ so much, yet function to perform many of the same tasks.  After that, we will look a little at each individual device and from there, try to pick a winner in our comparison. 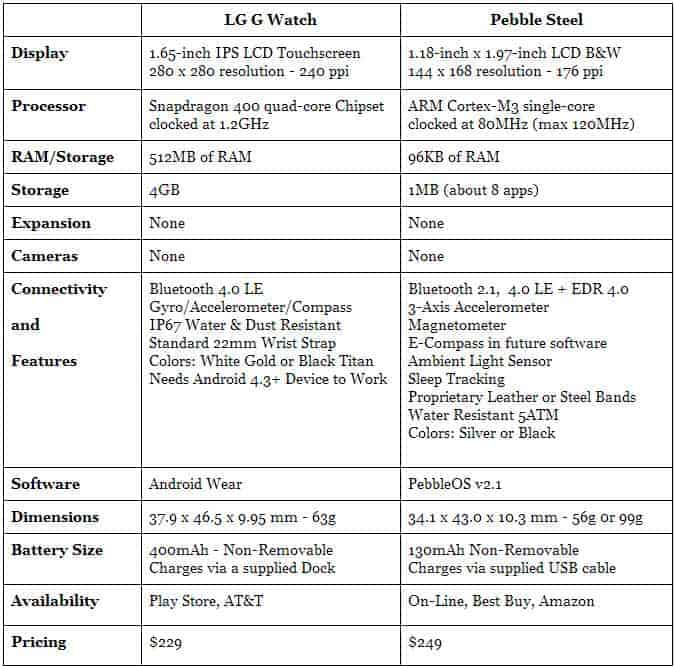 The LG G Watch is only one of two Android Wear smartwatches available so far – the other being from its arch rival, Samsung’s Gear Live – and it is the first Android Wear device to go up against the venerable Pebble company and their newest rendition, the Pebble Steel. While the specifications blow the Pebble right out of the water and may make one wonder if the Pebble has any chance at all of competing against these high-powered Android smartwatches – the answer may surprise you.

The LG G Watch is definitely the winner in the specs categories – from the larger, colorful display, we move on to the Snapdragon 400 quad-core processor clocked at 1.2GHz, the 512MB of RAM and 4GB of internal storage, simply crushing the 1MB (yes MB) found in the Pebble Steel.  While the PebbleOS v2.1 will work with both Android and iOS devices, the Android Wear OS found in the G Watch will communicate only with Android devices running Android 4.3 Jelly Bean or higher and iOS is not even on the radar.  The 400mAh battery in the G Watch is simply over powering for the 130mAh battery found in the Pebble Steel – however, in this edition of ‘Specs isn’t Everything,’ the Pebble Steel’s tiny battery will last four days, while you would be lucky to get 2 days with the G Watch.

When it comes to looks, at least in black and white, the Pebble Steel is one fine looking watch.  It is constructed out of stainless steel and comes in either the natural silver color or matte black finish – each watch comes with a metal and a leather proprietary band.  It is the closest looking smartwatch to a regular piece of jewelry that you will find on the market so far, although the upcoming Moto 360 may take away that crown.

Once we get past the Pebble Steel’s obvious good looks, from a specification point-of-view, things start to go downhill – FAST!  The only problem is, the Pebble was not designed to need a lot in the specification department – The display is large enough at only 1.18-inches wide, but 1.97-inches long – it looks more like the proportions of a regular wristwatch…but with only a Black & White display of 144 x 168 resolution and 176 pixels-per-inch (ppi), it is a far cry from the colorful 240 ppi found on the G Watch.  However, the watch face is very visible and easy to read both indoors and out.  It is powered by a small ARM Cortex-M3 single core processor clocked at 80MHz – very different from the powerful quad-core found in the G Watch.  It only has 96KB of RAM an only 1MB of internal storage – enough for about 8 Apps to reside.  All of this is powered by a 130mAh battery…although because of watches lower specs, it actually will last about twice as long as the more powerful 400mAh battery found in the G Watch.

Again, please do not misunderstand our findings – the Pebble Steel watch is a GREAT device, however, it is very limited in what it can do compared to the LG G Watch and its Android Wear OS.  It has only a B&W screen (although it can be seen better outdoors), it does offer better waterproofing, you don’t have to charge it as much, it has a shake-to-light LED backlight, it works with most phones, and it looks better than the competition – it just isn’t as smart or have as much potential.  If you are into B&W screens and want a great watch to tell time and a few features thrown in such as notifications, then the Pebble Steel may be all you need.

But if you want COLOR, new technology, and more than notifications, then the LG G Watch is for you. By using Android Wear by Google, the App library should grow very rapidly – not like a proprietary OS like Pebble – which only has room to hold eight applications at a time.  It also uses Google Now, where you can use voice commands by saying, “Ok Google” and then ask it a question or tell it what you want to do…such as, “call Linda” or “text Jake.” Like the Pebble, just move your arm and the G Watch will ‘wake up.”  Because it uses Google Now, it uses information cards to provide you with information – number of steps you just took, calendar alerts, Google Maps, music playback controls, email or text alert, and Hangouts, for instance.  The topper is the price – for $229, it is $20 cheaper than the Pebble Steel and it has the potential to grow a lot more than the Pebble.

Please hit us up on our Google+ Page and let us know which watch you would rather own and WHY…as always, we would love to hear from you.