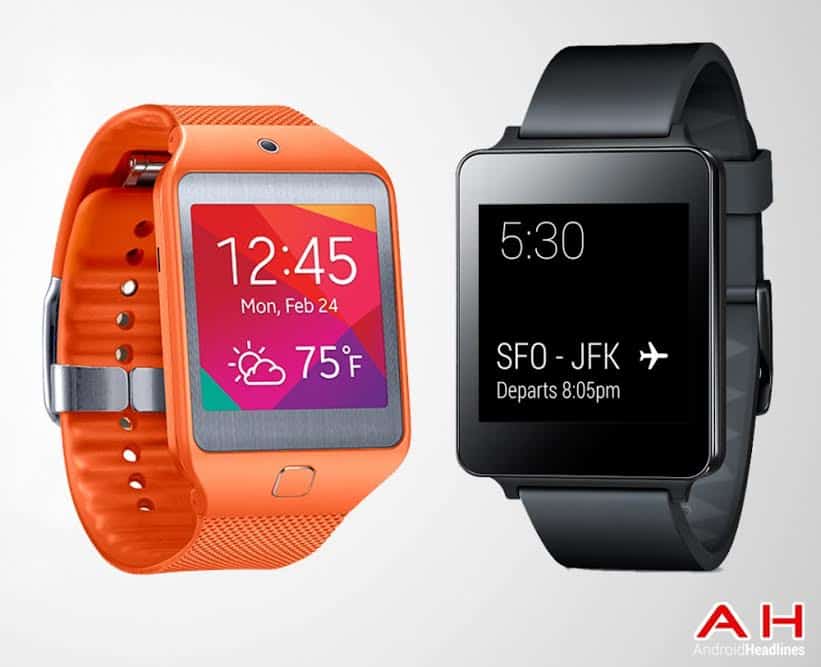 In this comparison we will put two brand new devices against each other – the LG G Watch up against the Samsung Gear 2 Neo. The G Watch is running Google’s new Android design specifically for wearables and aptly named Android Wear.  The Gear 2 Neo is also running a rather new OS, Samsung’s own Tizen…an Android replacement if you will.  In spite of that big difference in operating systems, these two devices have many things in common – they both use an almost identical display size – the G Watch uses a 1.65-inch display while the Gear Neo 2 sports a 1.63-inch display, although the characteristics of the displays do differ – we must point out here that neither device does very well in the outdoors and sunlight.  Both devices also use 512MB of RAM and both have 4GB of internal storage and neither offer no room for expansion.  These two devices do not have a camera – your smartphone will have to suffice for those picture taking moments.  Both are IP67 water and dust repellant, as well as both contain the usual Gyro, Accelerometer, and Compass, Bluetooth 4.0 LE connectivity and both sport a universal 22mm Wrist band for easy replacement.

With all of those common specs, it seems that these two devices would be very similar to one another, which they are, but please look through the complete list of specs and compare them closely and you will see some features surface that may or may not be important to you.

After that, we will take an individual look at each smartwatch and point out some pluses and minuses to try and determine a winner for this match up of the LG G Watch and the Samsung Gear 2 Neo. 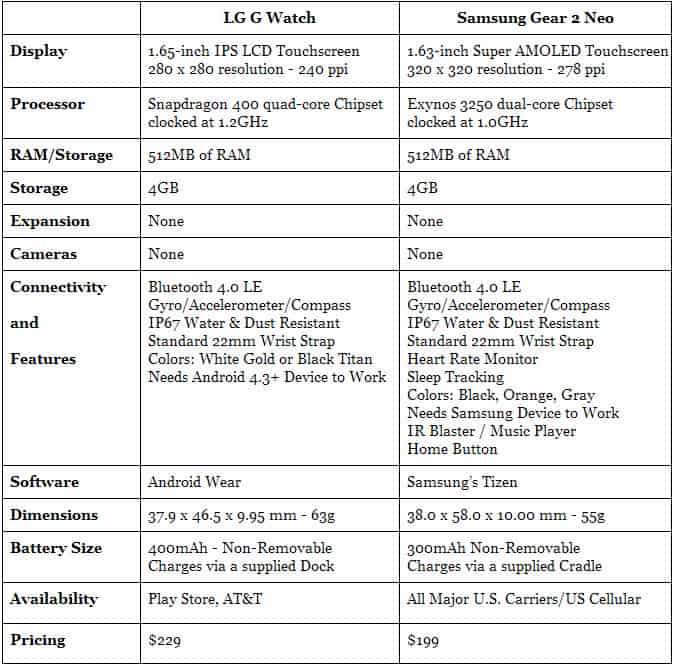 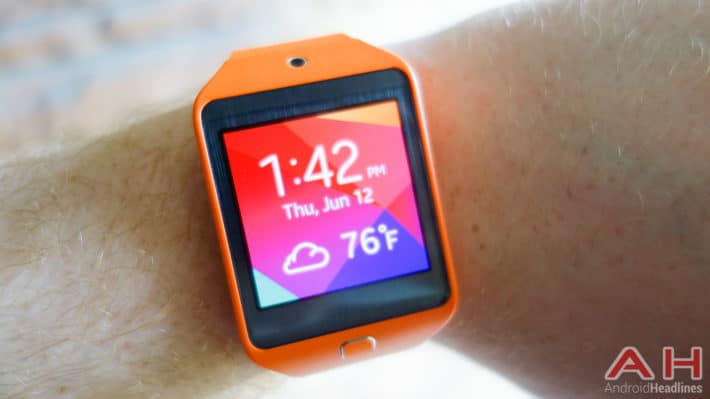 First we will take a more detailed look at the specs and features that make the Gear 2 Neo different from the G Watch. The first thing we notice is the display – although we said it was 1.63-inches and close to the 1.65-inches of the G Watch, it does differ in that it has a higher resolution of 320 x 320 with 276 pixels-per-inch (ppi) and is of the AMOLED variety – it is slightly better looking, both in definition and in more vivid colors.  Next, we will want to look at the processors – the Gear 2 Neo uses a Samsung Exynos dual-core processor clocked at 1.0GHz and not quite the processor found in the G Watch, however, for a smartwatch, both processors are more than capable of handling the job. The 300mAh battery is also smaller than the 400mAh found in the LG G Watch, but both batteries will give you 2-3 days of usage and both come with a charging cradle or dock and our advice would be to recharge it at night.

The Gear 2 Neo also has several features that are a plus – it has Heart Rate Monitor, Sleep Tracker, a complete Music Player where you can listen to music through its built-in speaker or send it to your Bluetooth device, a built-in IR Blaster to control your TV and other devices, and a convenient Home button – possibly a nuisance on a smartphone, but on a smartwatch, it saves you swiping the smaller screen to get home.  The one feature that may be considered a minus to some – you must use it with a Samsung Galaxy smartphone ONLY and that could be a deal breaker for many users.

The looks and feel of a smartwatch are very important since it is on your wrist all day long, where as a smartphone is in its case or your pocket a good part of the day.  Here the Gear 2 Neo wins out – it is about the same width, but taller than the G Watch, and it has a curve to its back design that allows it to fit on your wrist more comfortably. Price wise, it is also $30 cheaper at $199 versus the $229 of the G Watch.

The LG G Watch is LG’s first attempt at a smartwatch – and it shows up a bit in the design.  It is rather clunky and the bezel and front are made entirely of polycarbonate – which makes its $229 price tag just a little too high, but ‘watch’ for the specials that I am sure they will be running.  The G Watch sports a slightly larger display – 1.65-inches vs 1.63-inches – and a lesser resolution of 240 PPI vs the 278 PPI of the Gear 2 Neo.  It does have a faster processor and uses a Snapdragon 400 quad-core clocked at 1.2GHz, whereas the Gear 2 Neo uses a dual-core Exynos processor clocked at 1.0GHz – however, both processors are more than adequate to run a smartwatch.  Under the connectivity and features department, the G Watch does win for one item – it can be used with ANY Android smartphone running Android 4.3 and higher, whereas the Gear 2 Neo must use a Samsung Galaxy ONLY device, which would be a turn-off for some.  After that, the Gear 2 Neo just has too many other features that the G Watch just does not offer – Heart Rate Monitor, Sleep Tracker, IR Blaster, Standalone Music Player (the Gear 2 Neo has a speaker), and a convenient Home button.  The G Watch 400mAh battery does outdo the 300mAh in the Gear 2 Neo, however, you should get 2-3 days of usage out of either device.

One of the biggest differences is the Android Wear versus the Tizen OSs – with the Google Now function built into the Android Wear, you can use the “OK Google” and ask it a question and within seconds, your answer will pop up on your display and the Google Voice is getting to be very accurate.  With the Tizen OS, you are using Samsung’s S Voice, which still needs some work. 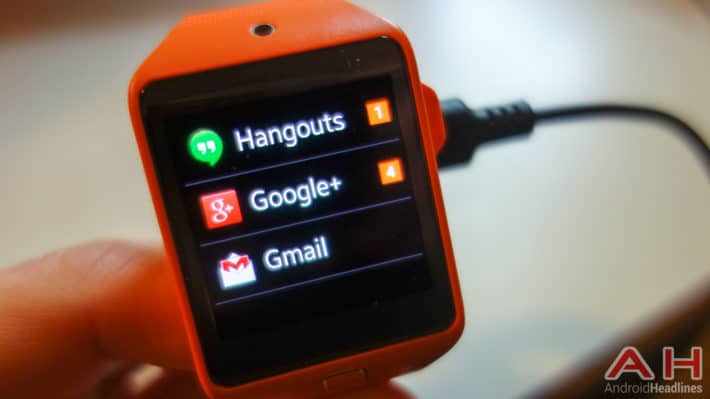 Okay, I am choosing the Samsung Gear 2 Neo over the LG G Watch, but it was a very close call – in fact, if you do not have a Samsung smartphone or do not care about the Heart Rate Sensor and IR Blaster, then you should probably go with the G Watch.  However, if you already have a Samsung smartphone, then I would pick the Gear 2 Neo for its added features and better design.  Both devices will give you ample notifications, but in order to keep your smartphone in your pocket and use the more convenient ‘on your wrist’ smartwatch, the Gear 2 Neo will better assist you in that department. Because it has both a microphone and a speakerphone, the Gear 2 Neo will allow you to listen to music from your watch or Bluetooth it to your earphones or external speaker.  The Gear 2 Neo will also allow you to answer and initiate phone calls using the smartwatch – the actual calling is done by the smartphone, but you can handle the entire call from your Gear 2 Neo.  If you are health conscious, then the Heart Rate Monitor and Sleep Tracker will come in handy. With the Gear 2 Neo’s IR Blaster, you can remotely control your TV from your wrist. I know many users hate Samsung’s Home button on their smartphones, however, it really saves a lot of swipes to get back to the home screen on the small displays found on smartwatches.

Both the Tizen and Android Wear are still in their infancy, especially the Android Wear.  In the very near future there should be some significant upgrades in Android Wear OS and the number of available applications should drastically increase, making the Android Wear devices a formidable competitor.  You make your own call and please let us know what your choice on our Google+ Page…as always, we would love to hear from you.