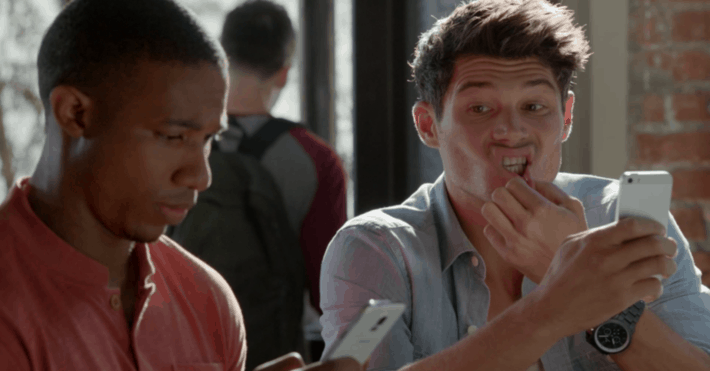 Many of you may not pay attention to the upcoming iPhone rumors, but it's said to be getting quite the screen size bump. Going from 4-inches to a 4.7 and a 5.5-inch version. I actually still think that 4.7-inches is the perfect size, especially with Apple's bezels. But 4-inches is just to small in this day and age, especially if they are looking to grab some Android users in the next year or two.

In this new commercial, Samsung returns to it's bread and butter. Which is making fun of Apple. I still get a kick out of the old "Samsunged" ads from 2011, those were great. In this commercial there are two guys sitting at a table – likely in a coffee shop – both on their phones. A Galaxy S5 and an iPhone (who knows which one, they all look the same). And the guy with the iPhone says that the iPhone is supposed to get a bigger screen this year. While the Samsung guy casually says "That hasn't happened yet?" And that's when it hits you, like really? Apple hasn't gone with a bigger screen yet? I know several iPhone users that switched to Android because Apple wouldn't go with a larger display. Well that might change this year. Samsung ends the commercial with "with 5.1-inches of full HD" and as we all know the Galaxy S5 does have one of the best displays on the market. At the time that DisplayMate tested it, they stated it was the best display they had ever tested. Which is saying something.

The Samsung commercials where they are making fun of Apple are always some of my favorite. Because they do it so tastefully, and the way they play them out, it almost seems like it's unscripted. Which it could be, but it most likely is. How many of you would be shocked if Apple went to a larger display this year with the iPhone 6?