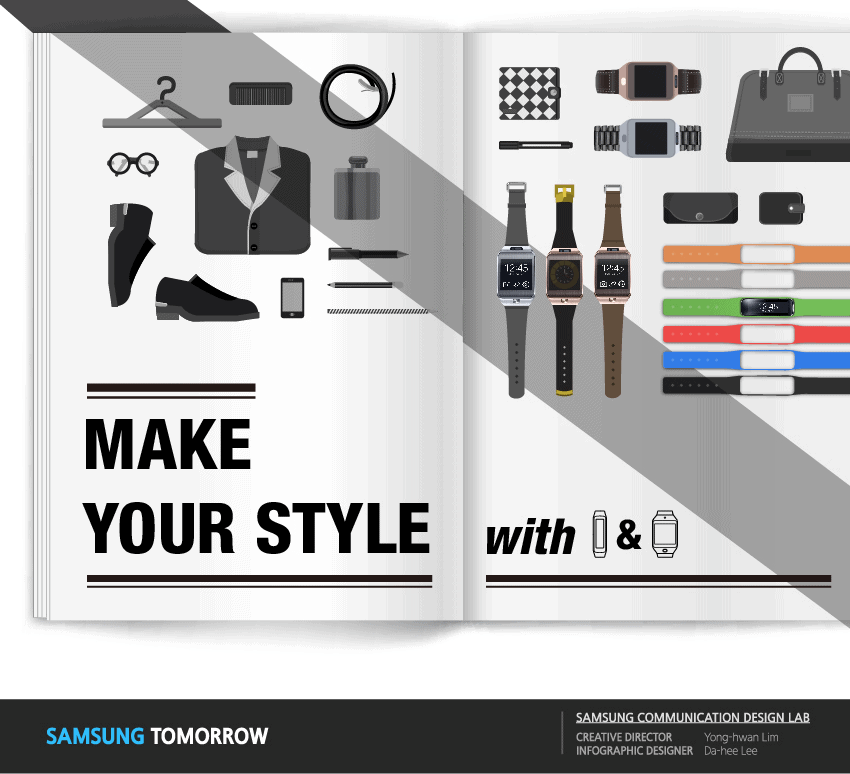 Samsung is known for its Galaxy s and Note lines of devices, as well as, and perhaps not as positively, for the Gear smartwatch line of companion wearables.  The first we saw of Samsung's wearable army was alongside the Galaxy Note III, back in fall of 2013, in the form of the Galaxy Gear, and the next and current was seen with the Galaxy S5, the Gear 2, Gear 2 Neo, and Gear Fit, each with a different type of person and style in mind, and Samsung today released a handy (though slightly lengthy) infographic detailing how to wear Gear with style, across different styles.

The highlighted devices are the Gear Fit, which acts best as a fitness band, like a super-charged Fitbit, and the other is the normal Gear 2, with its metal body and camera (as opposed to the Gear 2 Neo, which is plastic and has no camera on the outside of the wristband).  The focus of the graphic is three different kinds of people, the professional, the accessorizer, and the 'hipster' (which Samsung does poke fun at, like saying how they "listen to music that isn't even out yet, because those are the good ones"), and the peoples' different wardrobes and demeanors, which are amplified through and using their Gear devices.

First, we have the businessman, the professional, the suit-and-tie, man-of-the-hour looking fellow.  He sports the classy Gear 2, clad in metal, with its interchangeable wristbands.  The Gear is one of the details that this person cares about for an outfit.  He (or she) will want to coordinate the color of the wristband, so the Gear 2 allows the interchangeability of its own bands with any 22mm watchband out there.  Samsung notes that "this is for staying classy".

Next, we're introduced to the accessorizer, a person that has a Gear Fit, since it's about the size and dimensions of a nice bangle.  The Gear fit also features interchangeable wristband housings, but it goes one step different from the Gear 2, and allows the addition of 'crystal charm&bar', a crystal bit, made by Swarovski, to slide onto its wristband.  Samsung notes how if you get your hand under one of these, you'll be seen as someone that is "fun and lovely, but also […] someone who is health conscious and tech-savvy", which is true, since the Fit is meant as a powerful fitness band and smartwatch combination.  For the woman that loves to accessorize, and even accessorize her accessories, there are also wristbands with hearts across parts of them, to "represent your loveliness", and these are made by MOSCHINO.

And lastly, we meet the person who we might think is a hipster, one that's ahead of current trends with their own unique style and preferences, but he (or she) is actually just the average person, the guy that wears something because it fits and is functional.  For him, there are the colors and patterned wristbands for the Gear devices, so he can have a nifty stand-out pattern, or just match his shirt, shoes, or hoodie.  What's to note about our casual friend, and this is clever by Samsung, is that he is wearing, around his neck (in the last picture of him on the infographic) the Samsung Sound AG900 (around-ear) headphones we saw earlier this year.

Samsung lays out pretty nicely what it suggests and hopes you do to make your Gear your gear and help it to match and enhance your style, whatever it may be.  But remember, even if you don't fit one of these three 'general' types of people, you can always the fourth kind they left out, the you.  The most relatable kind, the you kind.  Follow Samsung's guide, or make your own.  Make it work for you and you'll be stylish whenever and wherever you go with your Gear.  The infographic, broken up into parts, is just below for your perusing pleasure.