Skip to content
Trusted By Millions
Independent, Expert Android News You Can Trust, Since 2010
Publishing More Android Than Anyone Else
3
Today
3
This Week
93
This Month
8267
This Year
125750
All Time 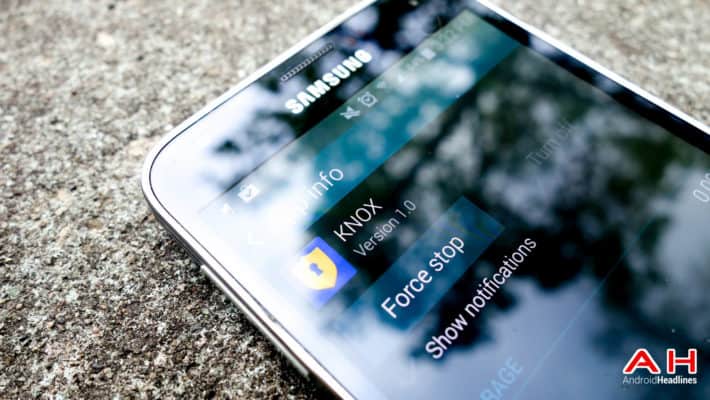 Samsung KNOX has been the driving force behind Samsung’s effort to bring a more secure environment to the Android OS space, for those that had Samsung devices at least. However, even with Samsung betting big on KNOX over the last couple of years, which had evolved from their previous attempt at security in their Galaxy devices with Samsung SAFE, the Korean mega giant seems to be closing shop on KNOX security and no longer will be putting the feature into future devices. KNOX has been the center focus for Samsung to gain ground in a previously untouched sectors by Android devices, which has been government and military contracts as well as business enterprise. Blackberry has been the go to choice for devices for the longest time in that area and in recent past, rumors were flying around that Samsung was gunning to pick up some of those contracts with the decline that Blackberry had been seeing in sales for the last couple years.

So now that KNOX is reportedly going away, who or what will handle the security side of things for the Android mobile OS? Forbes is reporting that Google will be taking on that task on their own, essentially lifting that weight off of Samsung altogether. It was just reported yesterday that Samsung had seen a fairly large profit loss totaling a number of 24%(specifically from operating profits), and although the U.S. Department of Defense has even recently approved KNOX as a security standard for use by people under government employ, that decision seems to have had no weighing factor on Samsung pulling the plug.

If Google is taking over the task of bringing a truly secure OS that meets enterprise standards to the table, it may not end up in the newest release that we are potentially seeing come up this fall. Forbes states that Android L, at least in its preview state, has no visible signs of a mobile VPN capability. Meaning that while people are using a mobile network connection the secure nature of data and app separation might not be possible. At least that’s how we understood it. Google has however apparently created its own version of a KNOX-like security feature that at some point will be making its way into Android handsets. When or in what form remains to be seen. However if Google manages to get its own organic security solution up and running as part of a “baked-in” Android feature at its core level, then Android could finally be up to a level of security that many have regarded Blackberry and iOS devices have met for some time.