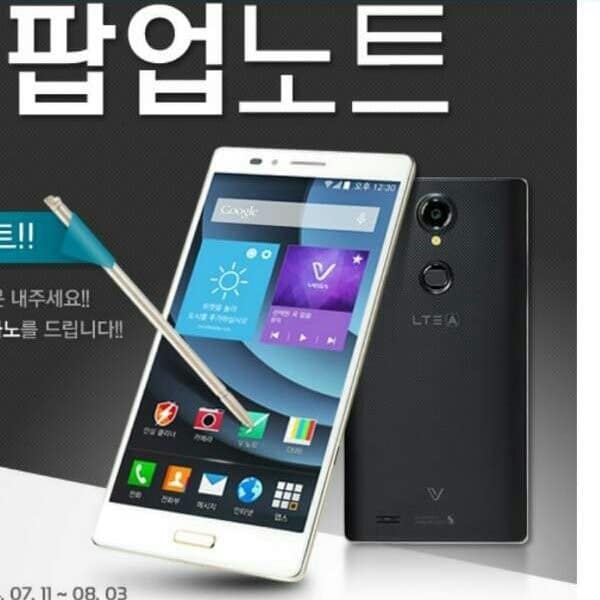 Ranking in at number 3 as one of Korea’s largest smartphone makers, Pantech seeks to challenge its rival Samsung. The device Pantech plans to introduce is called Pop Up Note, which is an enormously large handset. The reason for saying that Pantech seeks to challenge Samsung is because the Pop Up Note comes with a large 5.5-inch 1080p display and a stylus. By the size of the device, you can immediately say that Pantech wants to challenge Samsungs Galaxy Note line and take away market share from the electronic giant.

Looking under the hood of this behemoth, the Pop Up Note features a Qualcomm Snapdragon 801 processor that clocks in at 2.3GHz. The device was expected to feature Qualcomm’s 64-bit chipset but as the information goes, the Note will rock a Snapdragon 801. Moving on to the nitty gritty internals, the Pop Up Note will have a pretty good camera. The handset will feature a 13MP rear camera while sporting a 2MP front-facing camera. There isn’t word on how many GB of storage this device will have but we do know that the handset will have 2GB of RAM. Like the rest of the flagship smartphones that have recently been released into the market, the Pop Up Note will run on Android Kit-Kat.

Right now the Pop Up Note by Pantech does not have a scheduled date, but the device is expected for release in the near future. With that being said, the device could be released running the latest version of Android which by then will be Android L. The release of Pantech Pop Up Note will probably be a South Korean exclusive, so we will probably not see the handset hit the US Market. If Pantech could get their device over seas than that could mean more market share for them and possibly bump them up the ranks of largest smartphone maker in Korea.

Let us know what you think about Pantech’s Pop Up Note. Does this large device have what it takes to take on Samsung’s Galaxy Note Line? Share your thoughts about the Pop-Up Note in the comments below.