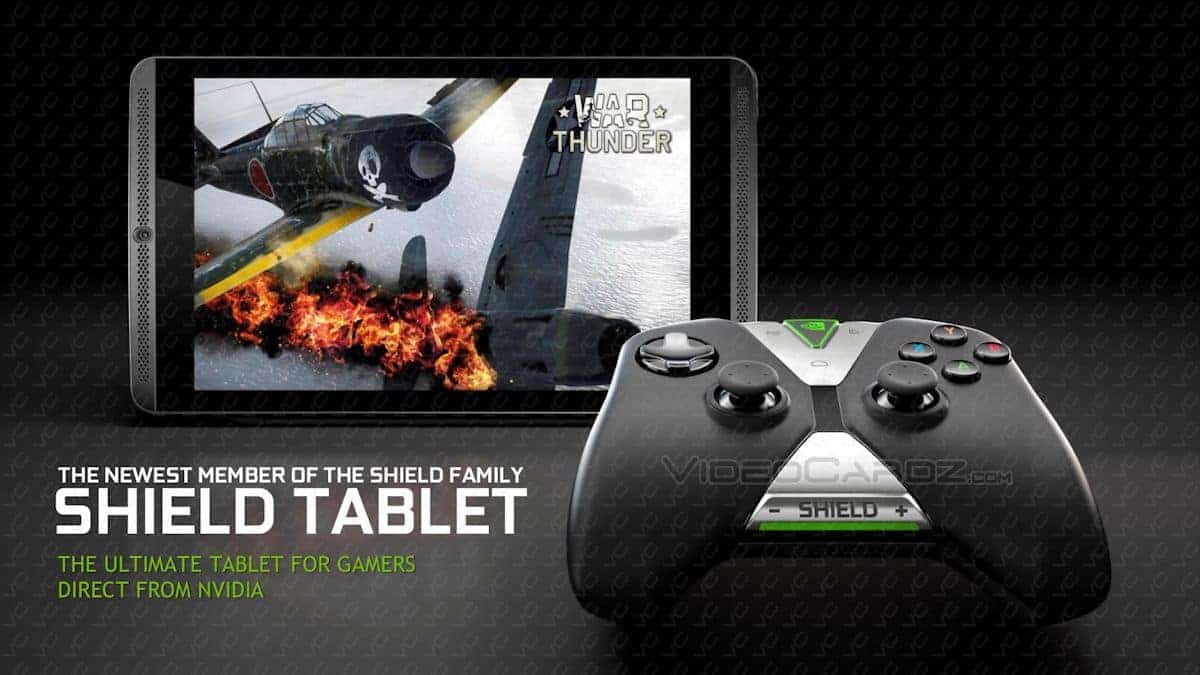 Just yesterday we reported on a leaked image of Nvidia's potential new Shield device, the Nvidia Shield tablet, which looked to have two front facing speakers, a front camera and overall great design to it that could have either been the successor to the original Nvidia Shield or the new direction Nvidia was taking after their Tegra Note tablet that released last year. Today we have some follow up details for that as Nvidia has just lifted the curtain on the Shield tablet complete with possible accessories if one should want them, in the form of a Shield Controller for playing games and a shield cover(simply a case)to help you keep it protected.

Nvidia stated that they would no longer be focusing on putting their chips within smartphones and would focus more on the gaming and auto industries when it comes to Android, and it looks like this is one of their products to keep true to that statement. Clarification lets us know that the Nvidia Shield Tablet will not be a replacement for the Shield but a new addition to the Shield family. On top of that, the Nvidia Shield Tablet and the accompanying wireless Shield controller and Shield cover, will all be going on sale in the U.S. starting July 29th. The tablet starts at $299 for the 16GB wifi only model, but you can up your storage space and get the capability of added LTE connection support by picking up the 32GB LTE model for $399.

The Shield Cover will cost an additional $39 for those that want it, and an absolute must if you want to take full advantage of what the Shield Tablet has to offer, is the Shield wireless controller which will cost an additional $59. All told, you're looking at spending around $460 if you want just the 32GB tablet and controller setup, a price that would also get you a PS4 and a second controller. However if you already have a console and are in need of a tablet that can not only work as your every day tablet, but also provide you with some of the best specs a tablet can for gaming, then you may want to consider the Shield tablet from Nvidia. This proves to be leagues ahead of the original Shield, and because it can double as your actual tablet, the higher cost seems to be worth it. Consider the specs too and Nvidia could have a winner on their hands here.

Ok, so lets talk specs. What's inside? For starters and probably the most obvious, is the storage because we already listed it. 16GB, or 32GB. Your choice. Both will have WiFi capabilities but only the 32GB model will come with LTE. Next, is the processing power. This baby is working with the Nvidia Tegra K1 CPU under the hood with 192 Cuda cores for graphics processing, and it has 2GB of RAM as well as the DiectStylus setup we saw from the Tegra Note 7 last year. The screen size is 8-inches and comes in with Full HD resolution, a detail that shouldn't surprise anyone with Nvidia's passion for high quality gaming. You're also looking at Bluetooth 4.0 LE and expandable storage via the microSD card slot with support for up to a 128GB card should you need more space. For someone like me who doesn't want to spend the extra $100 on the 32GB model, an easy work around is just to put a 16GB card into the 16GB model and that takes care of the 32GB that I was really wanting. This versatility will make for more happy gamers, as some of the games one can play on a tablet are… well, relatively HUGE.

Nvidia has also added 5MP cameras on both the front AND the back, so even though you may not take pictures with this tablet very often, that 5MP front facing camera should do very nicely for the hangouts calls or other types of video chat options that Android supports. This device should be running Android 4.4+ out of the box but there's no confirmation on that yet, but as far as updates to the device goes, they will come straight from Nvidia and if their updates via the Shield Tablet are anything like their graphics drivers updates for the PC, they should come in quickly. The Shield Tablet is also 4K UHD ready when it comes to video playback compatibility, and one should expect lots of awesomeness through the game streaming with games from Steam, and Nvidia's cloud based gaming platform GRID. After all that, all I can say is damn… I need to have this.