Skip to content
Trusted By Millions
Independent, Expert Android News You Can Trust, Since 2010
Publishing More Android Than Anyone Else
7
Today
110
This Week
624
This Month
3656
This Year
121272
All Time

Nokia’s stint with Android has been unfortunately short considering the quality the aging Finnish tech giant once used to put out.  After being bought up by Microsoft, Nokia’s hardware group has floundered quite a bit, and while it put out some experimental Android phones over the past year it seems like that experiment is coming to an end.  At this point all of Nokia’s Android phones are only running Android in a loose way, just as Amazon’s phones are running Android in a loose way.  These phones don’t feature any of Google’s services that make Android so much of what it is, rather they use Microsoft or Amazon’s services with Android’s base, and therefore a different set of apps since it’s not Google Play certified.

Now it’s looking like Nokia’s last official Android phone will be the Nokia XL 4G.  While the phone shares the name of the existing 3G Nokia XL it actually features a number of hardware improvements over the 3G model besides the obvious 4G network speed boost.  For starters the screen is the same 5-inch size with 800 x 480 resolution, which is pretty abysmal no matter how you slice it.  It’s also got 4GB of internal storage with up to 32GB microSD card support, Bluetooth 4.0 and WiFi up b/g/n, as well as a 2,000mAh battery.  Like the 3G Nokia XL, this newer model still features the Nokia X software platform 1.1 instead of the 2.0 that debuted with the Nokia X2.

What’s different here is the jump in RAM from 768MB on the Nokia XL to 1GB on the Nokia XL 4G.  The CPU has also seen an upgrade from a 1GHz dual-core Snapdragon S4 Play to a 1.2GHz quad-core Snapdragon 400 in the newer model.  It’s also quite a bit lighter than the original Nokia XL, moving down to a light 158g from the 190g of the original.  It also features LTE bands 38, 39 and 40 too, so this is highly likely to to stay in the Chinese market with D-LTE and TD-SCDMA LTE capabilities. 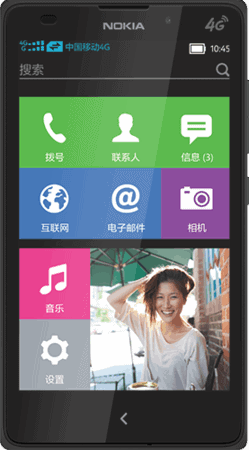