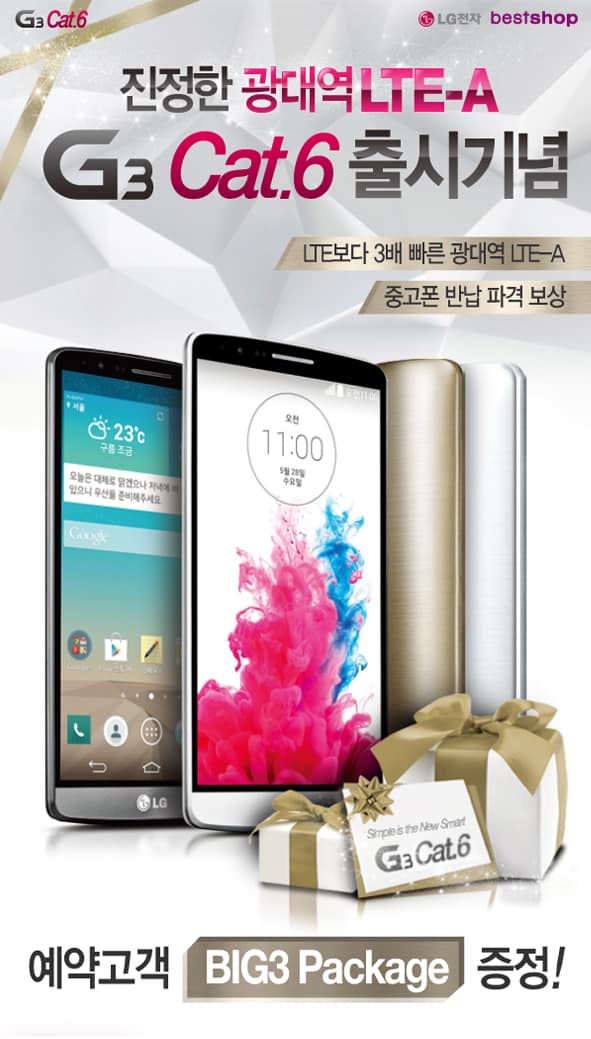 What became the Galaxy S5 Prime was launched a little while ago in South Korea as the LTE-A version of the Galaxy S5. While not the first time that Samsung has released a version of their flagship smartphone with a more powerful processor to get faster speeds on LTE, the upgrade to a 2560 x 1440 display understandably annoyed those that had bought the original one just months beforehand. Still, in South Korea, where subsidies are out of control it’s relatively easy for a consumer to jump ship to a different network. Since then, we’ve been hearing about a G3 “Prime” or a G3 LTE-A and now, it looks like it’ll be launching in South Korea shortly.

In a shopping mall in the country, a G3 supporting Cat6 LTE-A is advertised, which pretty much confirms the inclusion of a Snapdragon 805, as the 801 that originally launched in the G3 doesn’t support Cat6 LTE. 3GB of RAM will no doubt be onboard here as well, but that was pretty standard for the Korean version of the G3 anyway. Both the Galaxy S5 LTE-A and now the G3 LTE-A don’t offer too much of an upgrade from their original releases, but it’s arguable Samsung’s upgrade featured a little more oomph than LG’s. ]

Faster LTE speeds are great and all, but for the majority of users, we find it hard to believe they’ll actually notice the difference, which leads me to believe that the G3 LTE-A along with the the Galaxy S5 LTE-A are devices that have been encouraged by networks in the country. After all, in South Korea people jump ship thanks to enticing subsidies and ETFs paid for that something better is often demanded by carriers as soon as it can be made. While this is great for the networks out there looking to bring in more customers from another network, it makes things more confusing for consumers and if you had bought a Galaxy S5 or a G3 at launch, you’d be pretty annoyed to find out something better – if only a little bit – had already hit the market.