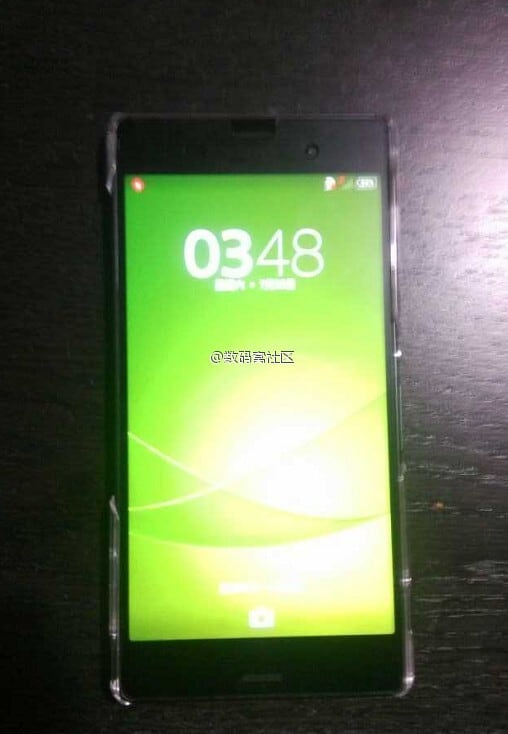 For better or worse, Sony follows a 6 month cycle when it comes to launching a new flagship phone, the most recent of which is the Xperia Z2 that has been out for a couple of months now. Last week the specifications for the upcoming Z3 were leaked by you-know-who (@evleaks) and it has to be said that the specifications were more than a little similar to the Z2. Things are slightly different in regards to todays leak of the Xperia Z3 Compact whose older sibling was the Z1 Compact.

For starters, as you can see from the pictures (main and gallery), the Xperia Z3 Compact shares the new design language of it's larger sibling, sporting rounder edges and softer corners that should hopefully mean that it will be more comfortable to both hold and store in the front pockets than it's predecessors. In the images, the Z3 Compact is sporting a silicon cover, which when combined with the slightly fuzzy camerawork, doesn't lend itself to scrutinization but you can still see the dual-speakers on the front of the phone, above and below the display.

Hardware wise, the Z3 Compact carries on the tradition of offering a flagship experience in a smaller package, with the grunt being provided by the Snapdragon 801 CPU, with 3GB of RAM on tap to handle multi-tasking. The rear-facing camera is said to be the same 20.7MP as the previous model, with a dedicated shutter button included on the side of the phone. On to the display, and the Z3 Compact has said to have increased in size from 4.3- to 4.6-inches as well as going from a 720p screen to full HD glory (1080P). If the specification is to be believed, the Xperia Z3 Compact will truly offer a flagship experience in a smaller handset.

So, in terms of hardware, the Z3 Compact appears to be a significant step-up from the Z1 Compact. The new design isn't exactly inspiring though, it just looks a little bland? But that's just my opinion, and the result of trying to peer past the silicon cover. I'm sure that this will not be the last leak we will see, and its not long until the expected announcement at the IFA in Berlin during September. Does the new rounded design appeal to you?  Let us know in the comments below or at our Google Plus page.