Here we have a couple tidbits of information regarding two upcoming LG smartphones – we will continue to feed you any updated information as it becomes available to us.  This information was spotted on two leaked documents on a UA Profile on an official LG website.  The first is model number D693N and is listed as the new LG G3 Stylus and our source has updated the information that there will be no more LG VU models – the LG G3 Stylus (an appropriate name for a Phablet) will take its place…and hopefully it will have stylus stored onboard the device.

If the D693N is indeed the LG G3 Stylus, the follow up to the LG VU, then we would be disappointed knowing from the UAProf that it is only a qHD display – meaning a resolution of 960 x 540 pixels.  The display size is unknown at this time, but given it would be a Phablet-type device with a rather large screen size, it would have a very low, pixel-per-inch (ppi).  This would not make a good showing to compete against the likes of a Samsung Galaxy Note 3 or Note 4.  According to our sources, the UAProf also is showing 3G HSPA connectivity and Google Android.

It appears that LG will continue to capitalize on the LG G3 name – the only problem is that they do not want to dilute the G3 branding by having a flagship LG G3 smartphone with a QHD display and then turn around and use the same moniker on a LG G3 Stylus device with only a qHD display.  It would be nice to have some real competition for the Galaxy Note series, but it will not happen with a qHD display.

The second bit of information is on the next generation LG G Flex, code named 'Liger,' as model number LG-F490L.  Rumors were that one of LG's Odin processors would power the device and it certainly looks like the second leak sent in by our sources loyal readers helps to confirm that rumor.  LG has not made it official that another 'Flex' would be produced, but LG is expected to come out with a follow up device.

Please hit us up on our Google+ Page and let us know if you are interested the the New LG G3 Stylus or a sequel to the LG Flex…as always, we would love to hear from you. 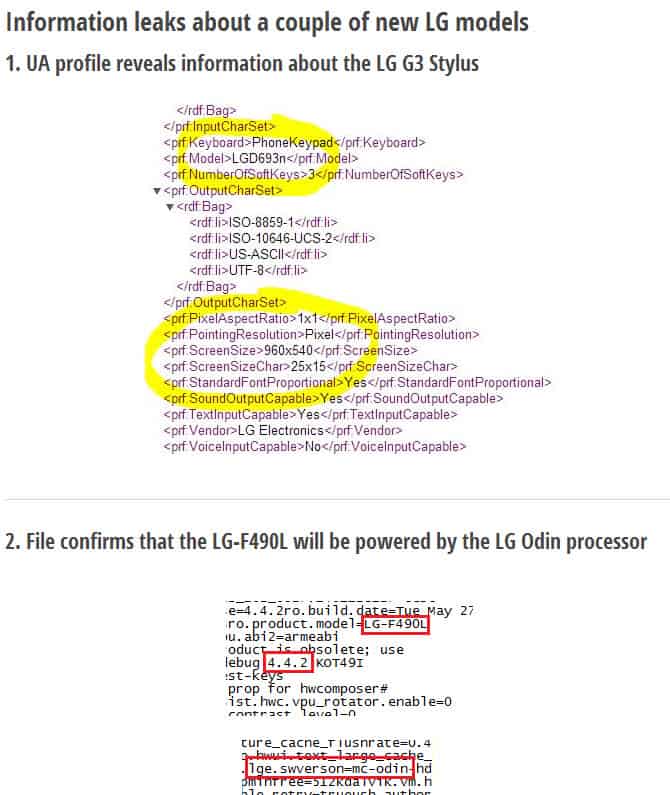