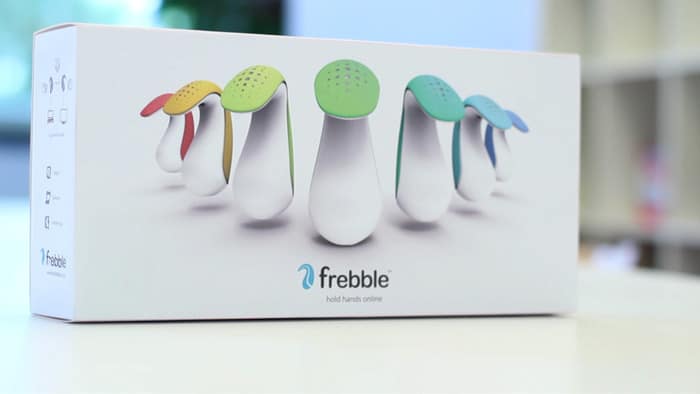 A new Kickstarter campaign aims to let you reach out and touch someone, almost literally, regardless of where they are in the world. The Frebble, a curiously-named gadget, simulates holding hands with your loved one through a bluetooth-connected device.

We live in an era of social dichotomy. While on one hand, our devices, be they phones, tablets or computers, give us the ability to connect with friends and family all over the world through social media, text, email, picture messages, voice and even video calls. Yet, some would argue that we have lost the sense of truly connecting and have thus become a more introverted society, regardless of the wondrous technology the majority of us use daily. Long talks on the phone and eloquently-written letters have been reduced to playing "voicemail tag" and numb "luv u" messages sent. An ultimate communication technology, wasted in 140 characters or less.

What Frebble aims to do is not change the way we interact with others from afar, but build upon it and add a human — well, touch. When combined with a video call, you would be able to not only see and hear your S.O. (significant other), but feel the squeeze of their hand in real-time. And sometimes, that simple touch can mean all the difference in the world. Currently, Frebble works with Google Chrome version 24 or higher and Firefox version 16 and higher. Once the Frebble is released, the developers say there will be both an Android and iOS app available for smartphones and tablets. You can even to go myfrebble.com to see which other Frebble users are online and reach out to them.

The minimum pledge is $1, just to show you care, but for $89, you can help fund this project and receive two Frebbles: one for you and one for with whomever you would like to hold hands. Estimated delivery isn't until October of this year, but that's to give the developers enough time to raise the $50,000 they are needing to fully fund the device. If enough backers pledge money and the campaign reaches their monetary goal by August 1, the project will move forward and you could be holding hands with your loved one this Fall.

Lend a hand to this kickstarter campaign to be able to hold a hand with someone you love. Check out the video below for more info and then let us at AH know what you think about the project!