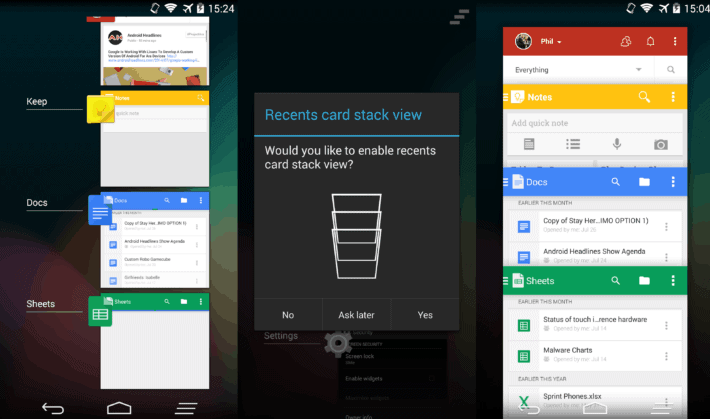 Anyone that recognizes the name knows the greatness of the ROM known as Paranoid Android.  PA, as it's called for short, is a ROM that has pioneered a few features in its time, including the PIE interface (where a semicircle of buttons is pulled out of the sides, top, or bottom of your device's screen so you have more space, and no need for the navigation bar on your Nexus or Motorola Moto device.  The team behind the ROM aims their efforts directly at devices that are 'open' to developers, with unlockable bootloaders, as well as extend Android, rather than just skin or add a few minor tweaks and features to it.  So the devices that get constant updates are the Nexus devices from Google, up to today's Nexus 5, as well as some of Chinese manufacturer Oppo's Find devices, and most recently, the OnePlus One, codename bacon.  Today, the PA team has the latest builds up for download by us normal folks.

The ROM is in two different stages of development, labeled as Alpha and Stable.  As the Alpha name hints, the build has the potential to be buggier and prone to more problems than the Stable.  The Stable, therefore is more likely to be a good choice for users who have a single device and need it to work, but want it to work on PA.  The Stable build is at version 4.45, while the Alpha is sitting at version 4.5, build 3.  Let's go over some of the nifty and tout-worthy in the Alpha 3 build, shall we?

So, after loading the latest Alpha onto my OnePlus One and playing around a bit, I'm considering loading onto my still-supported Galaxy Nexus, since it's that good.  So, the team implemented a new interface option for recent and running apps.  In Android L's preview, we saw the card-stack look of recent apps, and PA team has put their own twist on it and placed it into the Alpha 3 build.  Also worth noting, regarding the new interface is the dynamic recents button.  When going about the device normally, it is just the stock, AOSP box and hidden box's corner, but when you go into the recent apps list, it changes to three horizontal parallel lines, which allow for closing all the apps, instead of closing each manually.  It also ignores the most recent app (whether that's a feature or a bug, I can't tell, but it's convenient).  That should hold most of us over while some of the PA team gears up to go into their vacation season over in Europe.

As for the specific things that changed, PA reports on Google+ that there are fixes in the new recent apps interface (performance improvement, lighter shadowing, removing the bottom recents button, on-the-spot changing between old and new recent interfaces, as well as general cleaning up of the code), as well as the 'general' section (theme engine patching, as well as fixing the Hover icon size and hidden battery feature), and the themers got some notes too, but you'll have to go check out the post by PA, as well as the post that will likely hit their official blog soon.  If you've got the time and driving desire, go give Alpha 4.5 build 3 and Stable 4.45 a download, and you'll get a kick out of the latest from Paranoid Android.