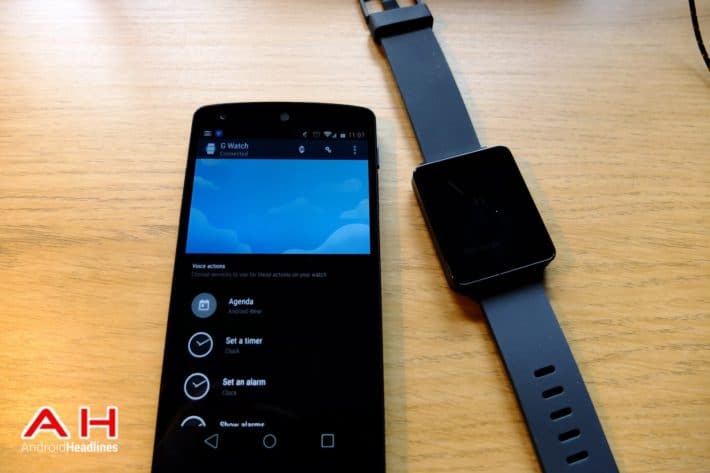 Coming soon? More like coming now. Android Wear looks awesome and now, finally we can all test out the app for ourselves. To a point, that is. If you're like me, we're in the vast majority of people who don't own and Android Wear device, yet there are a lucky few who can fully utilize this app. We're just left with an emulator for the time being. That'll have to do for now. Head on over to the Google Play store and download the app to see what all the kerfuffle will be about.

The app weighs in at 8.6Mb, which is a nice and small size in my opinion. The intro screen is very sparse but clean and gets you started in getting your watch set up. The next page shows a few simple graphics about what the watch can do and here is also where you accept Google's Terms and Conditions. After hitting "Accept," (and you will accept their terms, right?) there's a simple Bluetooth icon and it asks you to choose your device. What to do now? Just hit the little gear icon in the top right corner and turn the emulator on. Now what does that do? Actually, nothing. The emulator keeps saying that it's connecting but it never does to anything. However, from this screen you can check out the settings menu and browse compatible apps from the Google Play store. I checked it out and there are 25 apps listed so far for Android Wear.

The apps are pretty standard fare and what you would expect for a smart watch. Google Maps and Hangouts are there, 1Weather Widget and Evernote Wear, a radio app called Player FM, IFTTT, a contacts app called Contacts +, and this time of year wouldn't be complete without a soccer (football to the rest of the world) app. American Airlines and Delta both have an app for you frequent flyers in the group. The one I thought was the most odd, however, was the Duolingo app. Not in and of itself, mind you, but the fact that it's going to be on your watch. Interesting.

I'm very excited about the whole Android Wear project coming out and Google just stoked the fire by releasing this app. Now, I just have to decide which watch I want the most!

Let us know what you think about the app or Android Wear in general in the comments section!