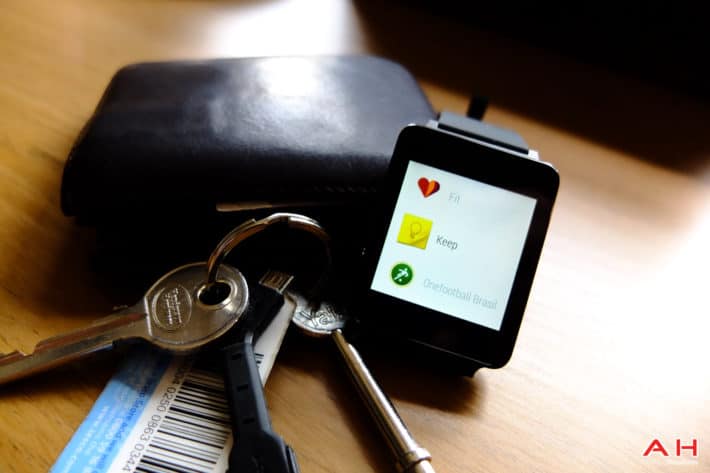 I’ve been using the G Watch for the best part of a week or so now and, as someone who’s firmly believed in the utility of such a device – I was previously using Sony’s SmartWatch 2 for the last 6 months – it’s been an interesting experience to say the least. Here, I’m going to talk about my first experiences with the device, we’ll certainly be putting together a full review of the G Watch – as we did for the Gear Live – so if you have any questions, just leave a comment below and I’ll also be paying attention to this post on Google+, too.

Taking the G Watch out of the box, I was pleasantly pleased with the build quality of the device, it’s got a nice heft to it, but I wouldn’t ever call it heavy and the steel construction feels nice and solid. Inside the box you’re given a microUSB wall wart as well as a charging cable and cradle. The G Watch’s charging cradle is excellent, it’s got a sticky pad on the bottom of it, and to charge it, all you need to do is drop the watch on the little plate and hey presto! There’s no awkward cable to attach here, as there is with the Gear Live and Pebble, and unlike Sony’s SmartWatch 2 you don’t have to fiddle with a catch to reveal the charging port. Having no buttons on the device at all might seem a little daunting at first, but to power it from nothing all you need to do is connect it to the charging cradle and you can restart the watch or turn it off from the Android Wear menu.

The G Watch has been called the ‘boring’ Android Wear watch due to the lack of design or logos or anything and well, I love that. The Sony logo on the SmartWatch 2 annoyed me greatly and I imagine the Pebble Steel’s logo would as well. The minimal look of the G Watch is nice, and while it is a little plain jane, it suits me just great. I dislike logos and overly complicated designs, so this is a personal thing of mine here.

Apps are now live in the Play Store and I’ve been playing around with a few of them, but nothing has impressed me all that much on the app front yet. What has impressed me though is how I can pretty much forget about the G Watch. It deals with every notification that hits your phone and many of them have simple actions, like replying to an SMS in Hangouts, and dismissing them is done with a simple swipe. With the SmartWatch 2 (which I will be comparing to the G Watch in detail later on) was a pain to get everything through to your watch, with the G Watch though it’s simple and once you dismiss it on your wrist, you won’t see it again on your phone.

So far, my favorite things about the G Watch is the ability to get updates on my step count, the ability to archive an email (using GMail) from my wrist as soon as it comes in and the ability to change straps. Unlike the Gear Live, you can simply attach whatever 22mm wrist band you like to the G Watch, and I picked up a nice, rustic leather strap this past weekend. The silicon band that comes with the G Watch is actually pretty good, and I was surprised by that, but if you really dislike silicon on your wrist, you can put whatever you want on here. I’m pretty impressed with the G Watch and Android Wear so far, but there are some issues.

For one thing, the G Watch is frankly a joke in sunlight. There’s a reason Qualcomm, Pebble and Sony went with different screen technologies. Even here in the UK, the G Watch is fairly difficult to see in sunlight. Sure, the gesture often wakes up the display and it’s not so bad at full brightness, but in sleep mode the glare the G Watch suffers from is just too much. It’s not a dealbreaker, but pretty annoying nonetheless. I’m still waiting for other, genuinely useful, none-Google apps to hit the Play Store as well, which I’m sure will come as it’s early days still, but for right now the G Watch – and Android Wear – feels like a great way to deal with notifications, but not too much more. Ask away in the comments and I’ll do my best to answer your questions and our full review will be coming soon!