Creating what could be the perfect camera has always been a struggle, but today we’re one step closer to reaching that goal.  Sony is one of the biggest supplier of camera sensors in the industry, and not just the smartphone industry either.  They supply well over half of all CMOS (short for complementary-symmetry metal-oxide-semiconductor) sensors to the smartphone industry, but there’s one problem that all CMOS sensors everywhere have, no matter who makes them: they are all flat.  Unlike the curvature found in the eyes of every living being on the planet, CMOS sensors rely on a series of multiple lenses to properly bounce light around a scene and absorb what they can, ultimately making it harder for the sensor to do its job than it should be.

Sony has developed the first curved CMOS sensor to attack this problem, and it acts just as the human eye would in terms of seeing the scene around it.  The picture above is in fact the first historical picture taken with the sensor, and while it isn’t a particularly high resolution Sony assures us that it’s nearly free of noise, something of a side effect to having a curved sensor, as the design allows it to accept more light and therefore take pictures at a lower ISO level.  Sony is also saying that there’s virtually no vignetting or aberration around the corners of the image; something flat sensors could only dream about doing.

One of the reasons the shot above isn’t a particularly huge resolution is that the prototype sensor is a much smaller resolution that the full frame sensors that Sony is ready to send off to production, which is great news for any photographer out there looking to take more than just Instagram shots.  At this point while the sensor is ready for mass production it does face one big problem: making zoom lenses for it is extremely difficult!  This is obviously a huge problem for any camera that uses a zoom lens like an SLR or even a point-and-shoot style, but may not prove to be such a big deal for smartphones.  We will definitely see this in a production device this year, the question at this point is which one?  Either way you can see what the sensor looks like below. 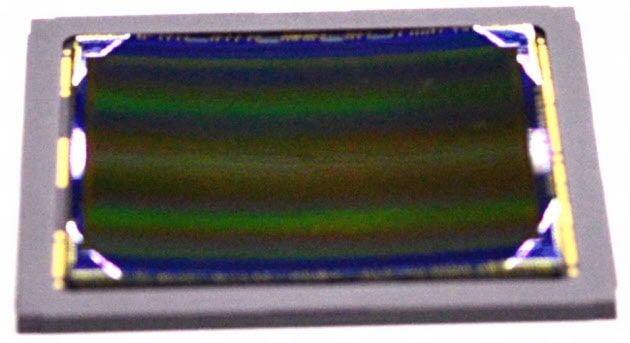