One of Android's biggest strengths is the ability to customize many parts of the operating system to make the phone you want.  We're not just talking about switching out your default browser for Firefox or Chrome instead of the built-in one, we're talking full-out creative customization via icon packs, wallpapers (living or not), themes and more.  Depending on what phone you have, if you are rooted and whether you run a custom ROM or not, these customizations can be restricted to just your home screen or can permeate the whole of the OS. That's why we're bringing you our favorite 25 icons packs that are regularly updated to give your device a fresh new look.  We're already nearly a month into what's officially deemed summer now, so it's likely time to toss whatever you've been using and move onto something new!  We'll break them down into four main categories: square, rounded square, circular and miscellaneous.  This will hopefully help you separate each of them visually and choose which ones are your favorite for each look.

Nox Nox features a more CG-type look with simple gradient colored square backgrounds, 3D icons and deep shadows.  Alternate colors of many popular icons are also available, and nearly 2,000 icons in total are available at this time.  Nox is $1.99. 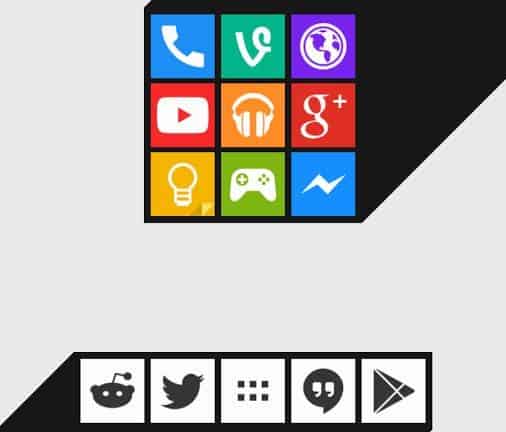 Minimal UI Featuring a completely flat look with choices of either bold colors or black and white versions of many icons, plus some alternate versions as well.  With nearly 1100 icons this pack will have most of your apps themed but not quite all of them.  It also contains 10 wallpapers and is $1.49. 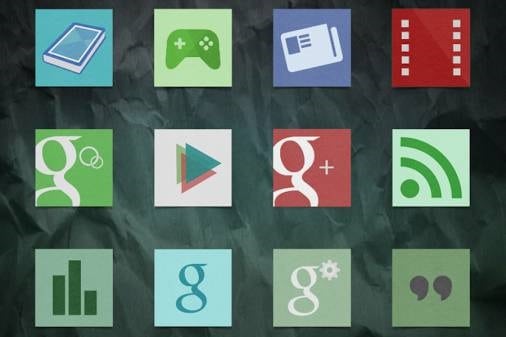 Cardstock Cardstock is a pretty unique square design that features lifted edges to look like the namesake says.  Colors are muted and earthy, and would fit well with more natural backgrounds, which are all included in the cloud-based app that comes with the icons.  There are only around 680 icons in this pack at this time, so your choices of themed apps are going to be fairly limited, but the developer updates the packs frequently and makes the $1.79 entrance fee worth it.

Stark Super flat, super square and super bold colors make up this icon pack named after one of the most famous superheroes around.  Much like Nox above, which is by the same developer, this pack features nearly 2,000 icons and cloud-based wallpapers with Muzei dynamic wallpaper support, and is consistently updated with more icons all the time.  Stark is $1.99. 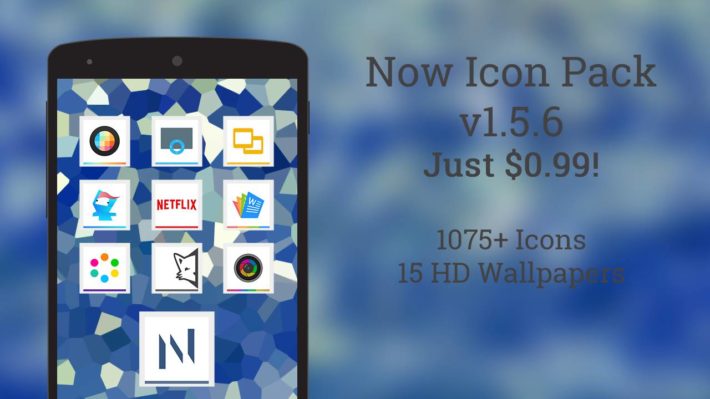 Now Themed after Google Now's card-based UI, Now icon pack features white square backgrounds with a grey border and prominent icons on top.  Nearly 1,100 icons make up the pack and are updated all the time, as well as 15 HD wallpapers.  Android L icons have been flattened and included in the pack and themed accordingly, and the masking makes even unthemed icons fit without looking awkward.  Now is $0.99, which makes it half the price of most icon packs out there. 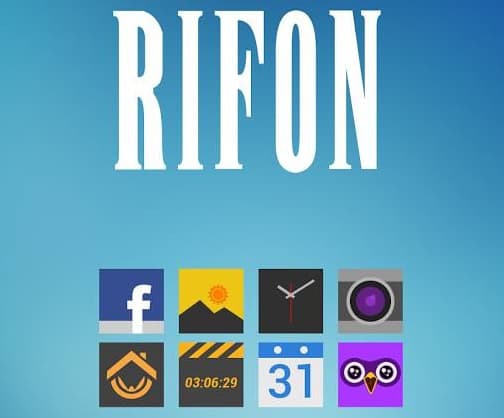 Rifon The last but certainly not least in the square set is Rifon, which uses multiple colors on each icon and tends to lean toward dual color schemes a lot.  There are over 1,700 icons including many alternative icons to choose for apps, and it also includes 17 HD wallpapers.  As of this writing Rifon is on sale for $0.99, which is half off, as well as all the other icon packs by this dev. 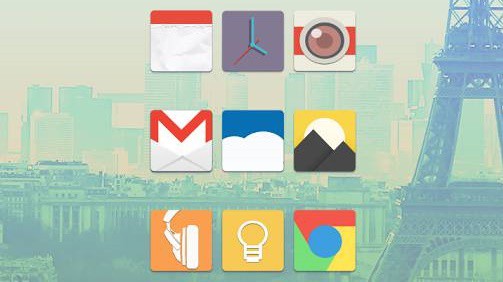 Banx Banx features a prominently flat design with very slight rounded corners on its square backgrounds.  Vibrant colors and unique individual icons make this one visually stunning pack.  While some icon packs choose to use a basic template for all icons, Banx only looks similar because of its color palette usage and flat nature, otherwise each icon looks unique and stands out from the rest, making it super simple to find what you are looking for.  Over 1,000 icons and a dozen wallpapers come with the pack for $1.49. 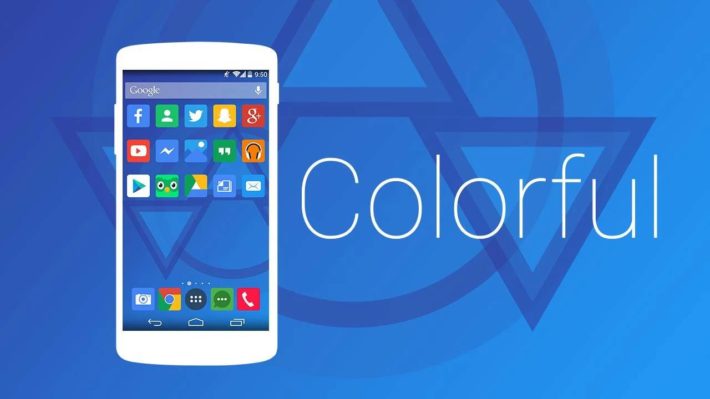 Color Flat Simple an basic vibrant colors flank flat icons with similar color choices in Color Flat, as the name would suggest.  Over 450 icons are available at this time with updates every two weeks.  Even the calendar app is dynamic and will change with the correct date, so there's plenty of attention to detail in this pack.  A standard dashboard app included with the icons brings cloud-based wallpapers, all for around $1.

Quadro Quadro rounds out the pack here with a very unique textured look to its icons.  Featuring vibrant bright colored backgrounds with contrasting colored icons on top, the whole icon itself is also textured, giving it a more paper-like feel.  Unthemed app icons are also masked to give the same appearance just in case one of the 1,700+ icons included don't cover all of your apps.  $1.89 gets you all these icons, over 100 cloud-based wallpapers, dynamic calendar icon support in Nova, and 16 docks for Nova as well.  Easily one of the best deals on the scene. 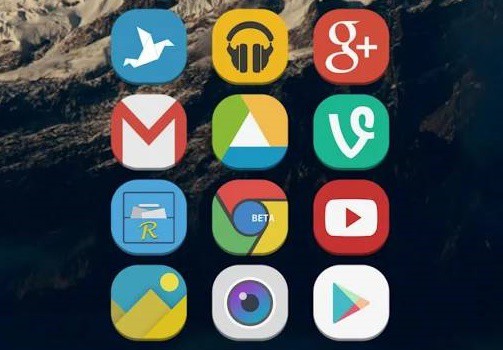 Stock UI Stock UI's icons feature a shape somewhere right in the middle of a square and a circle, and feature a more muted color palette than many other icon packs while still retaining a full range of colors.  This is the same developer as the icons above, Quadro, and feature the same number of icons and features for the price of $1.89. 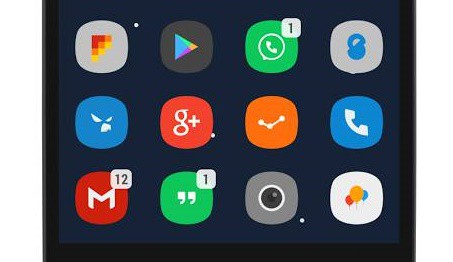 UFO UFO is a super minimalist flat icon set that features bright single colored backgrounds with single colored icons for most apps.  This gives a much more simple geometric feel to the icons themselves and help make them stand out because of the colors.  $1.29 gets you over 900 icons, 8 wallpapers and icon masking support for unthemed icons. 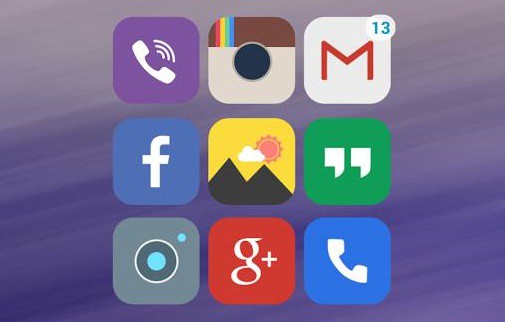 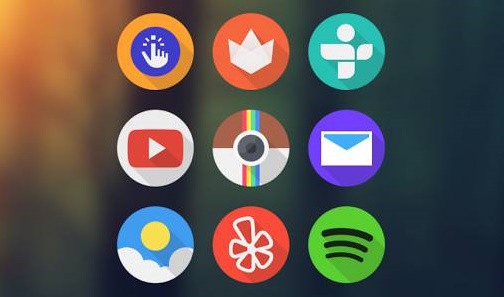 Click UI Click UI has been around for a while and for good reason.  The developer constantly updates the icons, bringing it up to over 1,200 icons at this point, and each features a pastel color palette with an icon floating over top and a drop shadow to accentuate this look.  13 HD wallpapers, dynamic calendar icon support and icon masking all come together for $1.99. 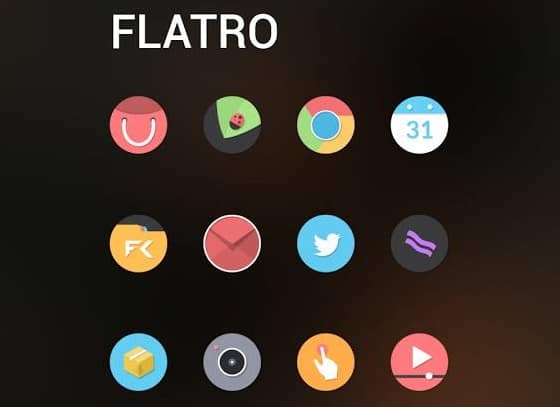 Flatro Flatro gets its name from being a blend of retro, flat and minimal icon styles, and feature a much more muted set of colors than Click UI does.  Nearly 1,200 icons, Zooper widget support, 24 wallpapers, alternative icons and icon masking make this one a pretty complete package for $1.99. 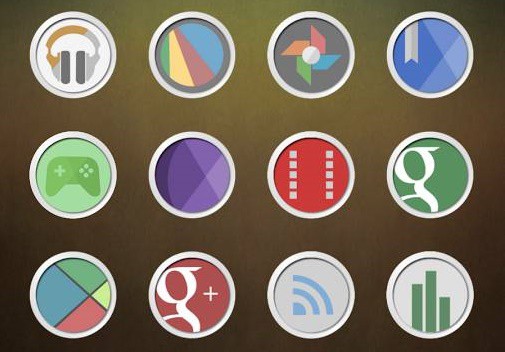 Spectra Spectra is a circular icon pack with a strong white border around each icon that's slightly raised, giving the icon the look of being inside of a button.  Colors are muted and feature different icons themselves from most icon packs, giving this one a completely unique look.  There are only 600 icons, which is less than some other packs but will still theme plenty of your app icons, and $1.79 also gets you wallpapers to go with the icons. 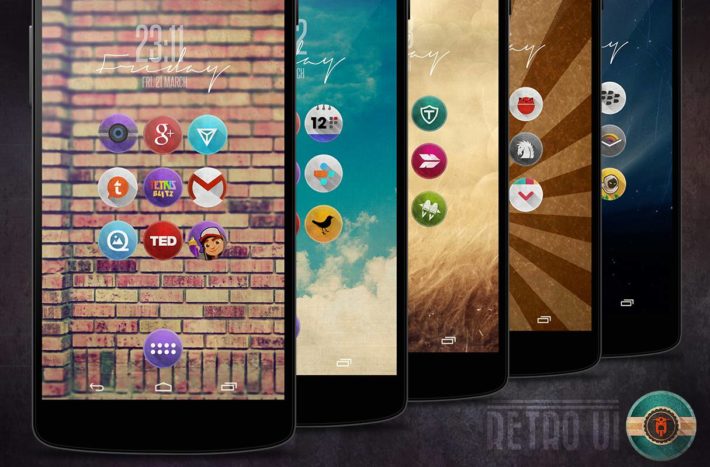 Retro UI Retro UI puts a tinge of dirt on your circular icons, giving them the look of an urban landscape that's been around for a while.  Colors are slightly held back from the full range and all feature a prominent drop shadow to give them that floaty feel.  $1.49 gets you nearly 1,000 icons with alternates as well as 14 wallpapers.

Cryten Cryten is a super flat circular icon pack featuring ultra-muted pastel colors.  Much like Alos, which the developer also created, this icon pack is absolutely massive and features nearly 2,200 icons with all the same feaures as Alos for a whopping $0.99 on sale right now.  It's normally $1.99 so grab it while it's hot! 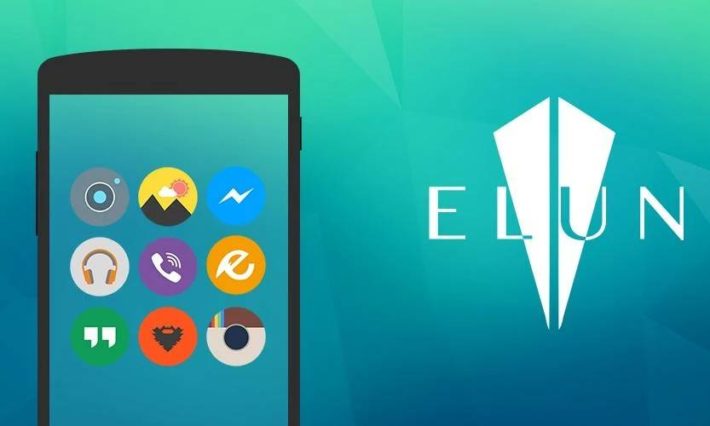 Elun Elun is another amazingly huge icon pack by developer Vertumus, and it's pretty obvious that these icons are featured for a reason.  Again nearly 2,200 vibrant, colorful circular icons are featured in this pack and feature no shadows or gradients at all.  All the same features in this developer's other icon packs are here too, and for $0.99 these are an absolute steal!

Notro Notro satisfies the film Noir lovers out there with a completely dark grey and white flat color scheme with simple, unique icons inside each circlular background.  For $0.99 you get over 300 icons, which is unfortunately less than other icon packs, but you won't find ones this unique anywhere else.

DOT DOT eschews the usual circular design philosophy by making the actual icons themselves larger than the circular backgrounds they are placed on.  Since the icons are different sizes and shapes each one features a completely unique silhouette, and the muted color scheme will keep this one easy on the eyes.  $2 gets you over 1,000 icons with dynamic calendar icon support.

ClearPack ClearPack is another icon pack that doesn't believe in keeping icons inside borders, and features a prominently darker color scheme than most color icon packs do.  Icons are all very uniquely shaped, and $0.99 gets you over 500 of them to choose from. 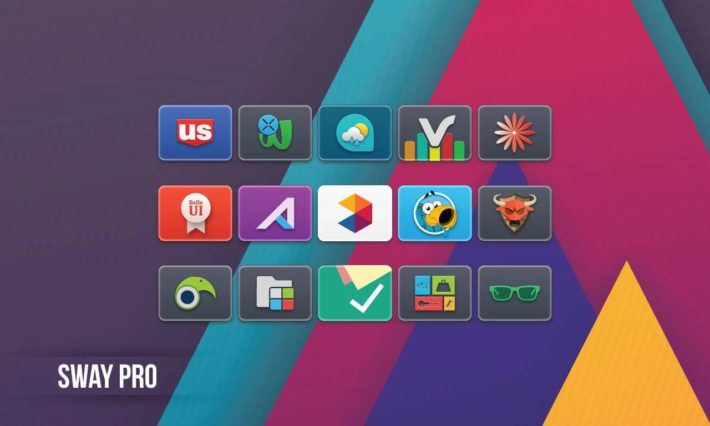 Sway Sway takes the usual square shape and morphs it a bit, giving you a rather unconventional wide rectangular design.  This keeps the icons much more separated than usual, and the muted colors keep them easy on the eyes.  The free version features a few hundred icons while $1.50 will get you all 1,500+ of them.

Naxos Taz Featuring no backgrounds at all an elementary color palette very close to Android L's style, Naxos Taz stands apart from the rest because of the icon shapes.  $1.79 gets you over 1,400 icons, 32 wallpapers, Muzei support and more. 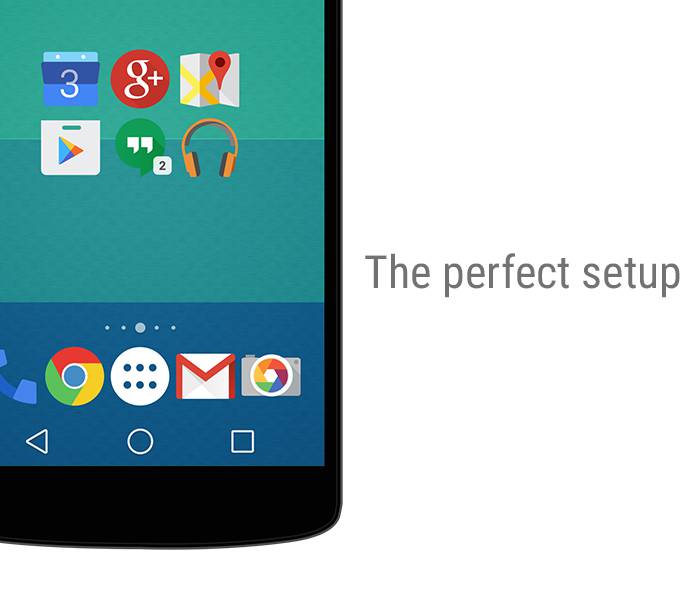 Moonshine Last but not least is Moonshine, which is modeled after Google's own Android L Material Design, and was the first icon pack to feature leaked designs from Android L.  The best part about Moonshine is not just that it has nearly 400 icons, but that it's completely free, and the developer has been updating the set regularly since the launch.  Looking for that next big look before Android L hits?  What are you waiting for, grab these now!