While we’ve known about Android Wear for some time now, it’s only this summer that hardware running the platform has been getting to people’s wrists. Right now, the only two options are LG’s G Watch and Samsung’s Gear Live, with the Moto 360 not hitting shelves till later this summer. We reviewed the Gear Live a little while ago, and I’ve been living with the G Watch for a fortnight or so now. With a decent selection of smartwatches on offer from Pebble – including the classier Pebble Steel – Sony and Samsung, does Google’s own approach to the smartwatch (and its first new form factor since the tablet) have something better to offer? Let’s see if LG’s G Watch answers that question in our review. 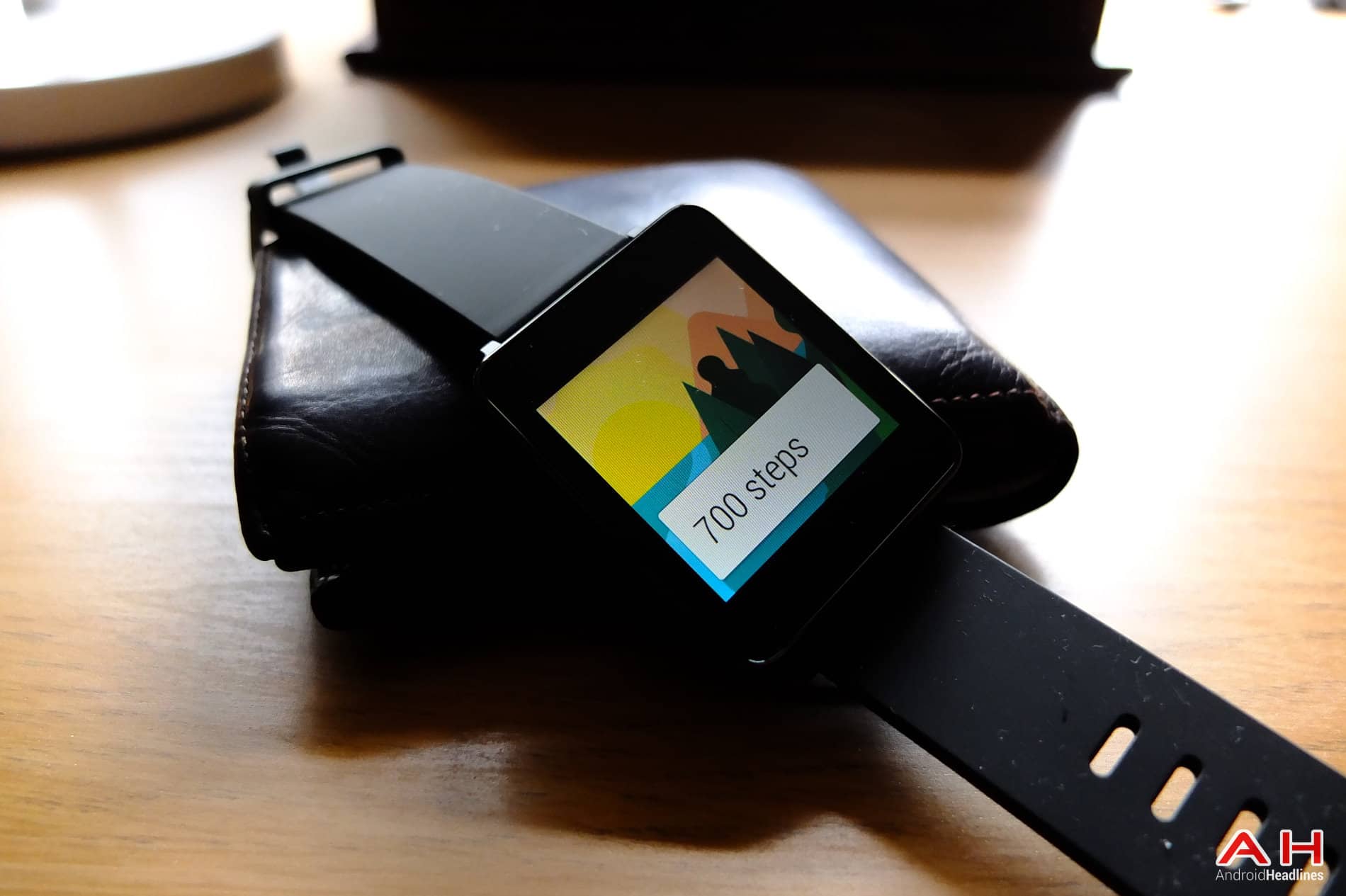 Forget the software, forget the gadget side of things, the G Watch is essentially a piece of your clothing, even more so if you’re a regular watch wearer. As you can see, there’s really very little to the G Watch and well, there’s more a lack of design than anything else. Which I personally love. Design is all about personal taste and the black, digital, square look of the G Watch just ‘clicks’ with me. I like the fact that it’s non-descript and it lets your notifications stand out. I’m not a big fan of logos on devices and turning my wrist into some sort of advertisement for LG would turn me off (thankfully, Samsung takes this approach with the Gear Live as well). If you were looking for something that stands out, that looks somewhat traditional and will have people commenting on the look of your watch, rather than how much of a gadget it is, then waiting for the Moto 360 is for you.

As for the build, the G Watch is a steel sort of slab that’s completely sealed with no buttons at all (more on that later). It feels sturdy and it definitely feels well-made and worth the asking price. As it is a sealed unit, it’s water and dust resistant which means you can easily wash the dishes wearing this or happily get it wet in the rain. I wouldn’t recommend swimming or showering with the G Watch, but its IP67 rating says you could if you really felt the need to.

One more important aspect of the G Watch is the standard 22mm watch fitting, which allows for straps to be put just like a “normal” watch. The Gear Live can do this as well, but where the fittings are on the G Watch mean you can pretty much find any strap you like and get a decent look out of it. It’s nice and easy to fit using standard springbars and your local jeweller (or your friend, Amazon) will have something for you. I went for a brown leather strap that’s pretty minimal with a nice touch of class. Having said that, the silicon band that comes with it isn’t bad at all, it’s soft and should fit the vast majority of wrists with no problems. My only complaints are that it would perhaps look better in black, rather than gray, and it collects lint and dust like a magnet.

(For the ladies out there thinking a square, bulkish watch like this might not suit, here’s an image of my girlfriend wearing it with the default strap.) 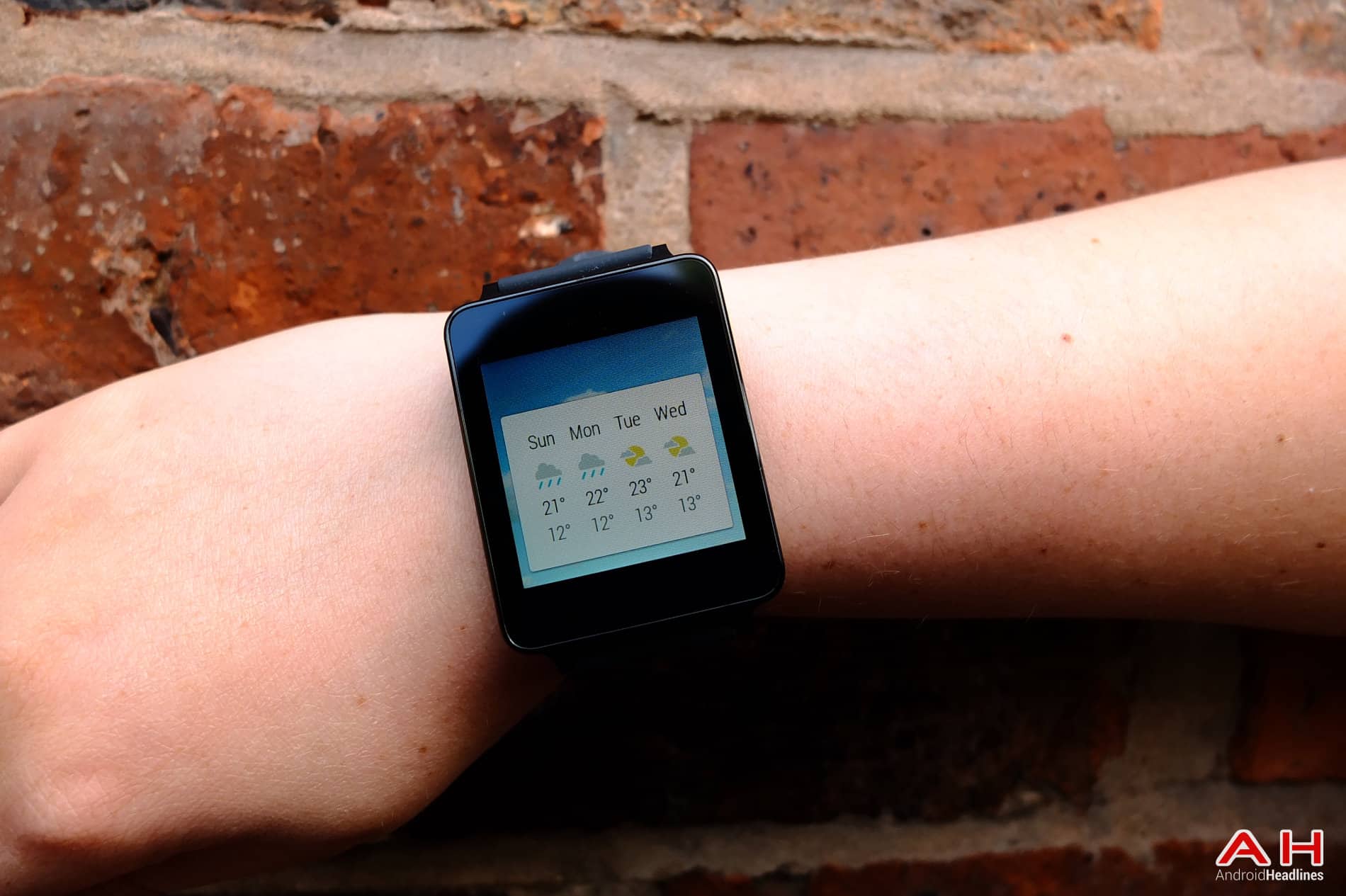 No matter if you choose the G Watch, the Gear Live or wait for the Moto 360 Android Wear is the same on all of them. Right now, Wear is well, a really good inbox on your wrist. It’s excellent at catching all of the notifications that come through to your phone and they carry across nice and quickly. No matter if it’s eBay, Facebook, Hangouts or your chosen SMS or messaging app they all just appear on your wrist. Which is great and all, but only a few of them have any actions available to them. Hangouts for instance, allows you to reply to the message and scroll back a little through previous messages, but you can only send an SMS using Wear and your voice, not an IM which is a little backward. Facebook, Twitter, other messaging apps are for the most pretty useless right now, with a prompt only to open the app on your phone (the equivalent on hitting the notification from your phone’s pulldown). This is of course up to developers to implement Android Wear support into these apps, Google can’t do everything and now that the full Android Wear SDK is available support should be trickling down steadily. 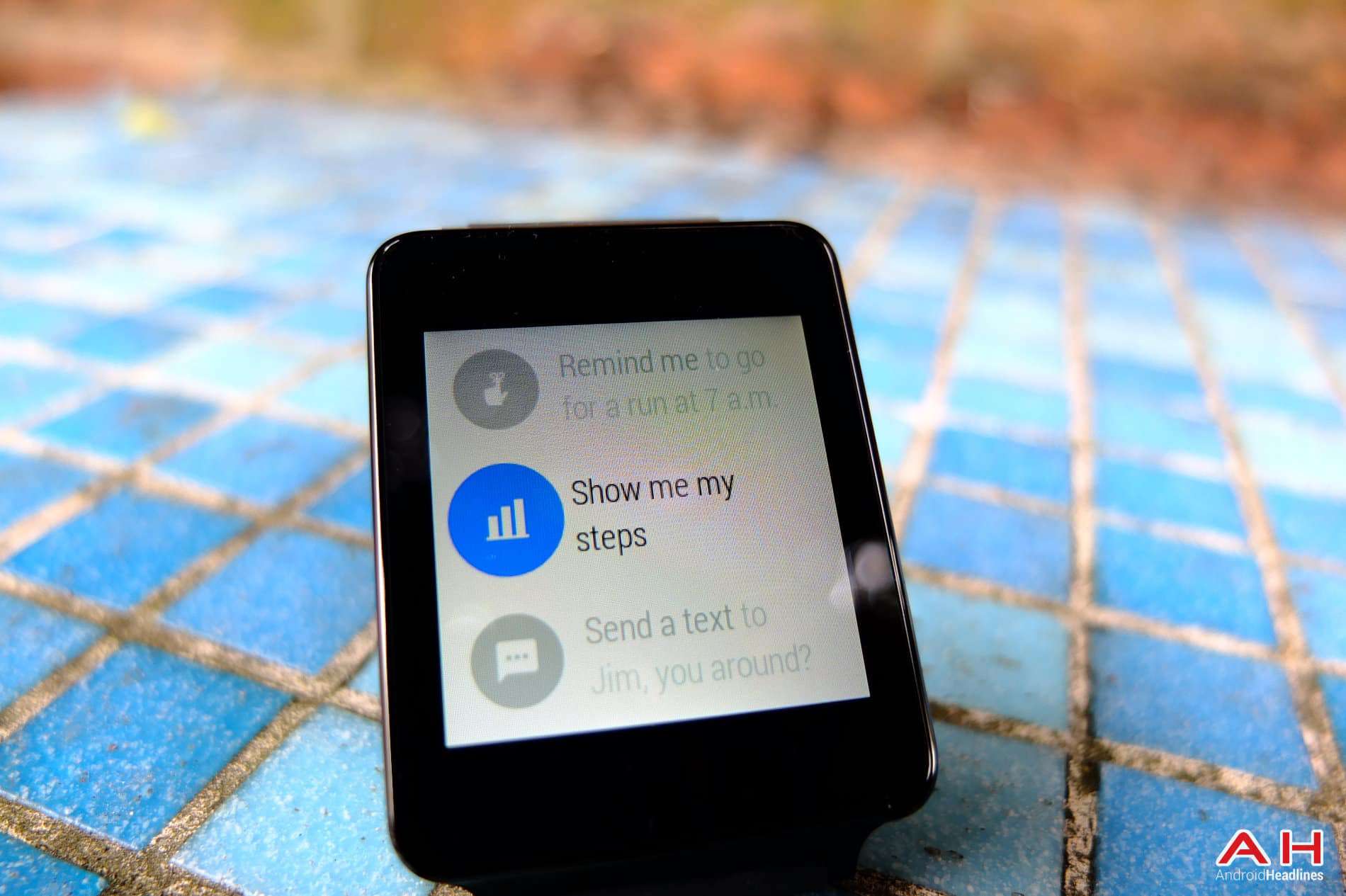 For Google stuff though, Wear has quite a few drinks up its sleeve. For instance you can ask the G Watch “do I need an umbrella?” and you’ll be given a look at the weather, swipe to the left and you’ll get a four day forecast. The same goes for Keep, you can set a reminder and even look at and tick off things from your to-do lists. Of course, the idea of talking into a watch is well, ridiculous. I’m a little bias on that front as here in Middle England technology isn’t exactly everywhere. The step counter is fairly accurate n my experience, but it took a little time to settle, at first it was wildly liberal with its steps and it’s since become more realistic, but a dedicated pedometer this ain’t.

As for apps, these are slowly appearing and we’ve already seen a Flappy Bird clone and Tic Tac Toe appear for distractions. However, nothing groundbreaking has hit the Play Store just yet and standalone apps are still fairly simple affairs like a calculator or an alert to tell you you’ve gone out of range (which should have been built in). There have been some watch faces hit the G Watch and other Android Wear devices, like my favorite so far, a beta version of the Awesome Clock Widget but it’s still early days for apps and faces alike.

To sum it up, right now Android Wear is in its infancy and while its toybox is great for notifications, there’s not much else in there. Which is a shame, but as with anything new, it’ll take a little time for apps to get better and offer some genuine use.

One of the biggest complaints I see is the idea of having one more device to charge at night, and unfortunately that’s true of the G Watch. Each day I put my watch on around 08:30 in the morning and by the time I take it off somewhere around 23:00, I’m left with say 30% or so battery life. So yes, you can get a full day no problem, but not much more than that. Thankfully, the G Watch is a joy to charge.

The included cradle is so brutally simple that it’s a wonder anyone went a different route (we’re looking at you, Samsung). It’s just a black rectangle with some pins sticking out that’s slightly magnetic. Just plop the G Watch in there and that’s it, you’re done. It even comes with its own microUSB cable and wall wart, something other smartwatches just don’t come with. It is a pain to charge these devices daily, but it’s made so easy here that simply placing it in its bed every night to not have your watch die the next day isn’t a big deal at all. We also have to remember that the G Watch is running a 1.2 Ghz CPU with 512MB of RAM, a standard LCD display that’s always on in some form or another all on a tiny 400 mAh battery.

As we said above, there are no buttons on the G Watch, but you can reset the watch and turn it off from the settings if you wish. To turn it back on again however, you need to plug it in to its cradle to get it to come back on. You can easily mute notifications at any time by just pulling from the time, which also tells you how much battery life you have left. 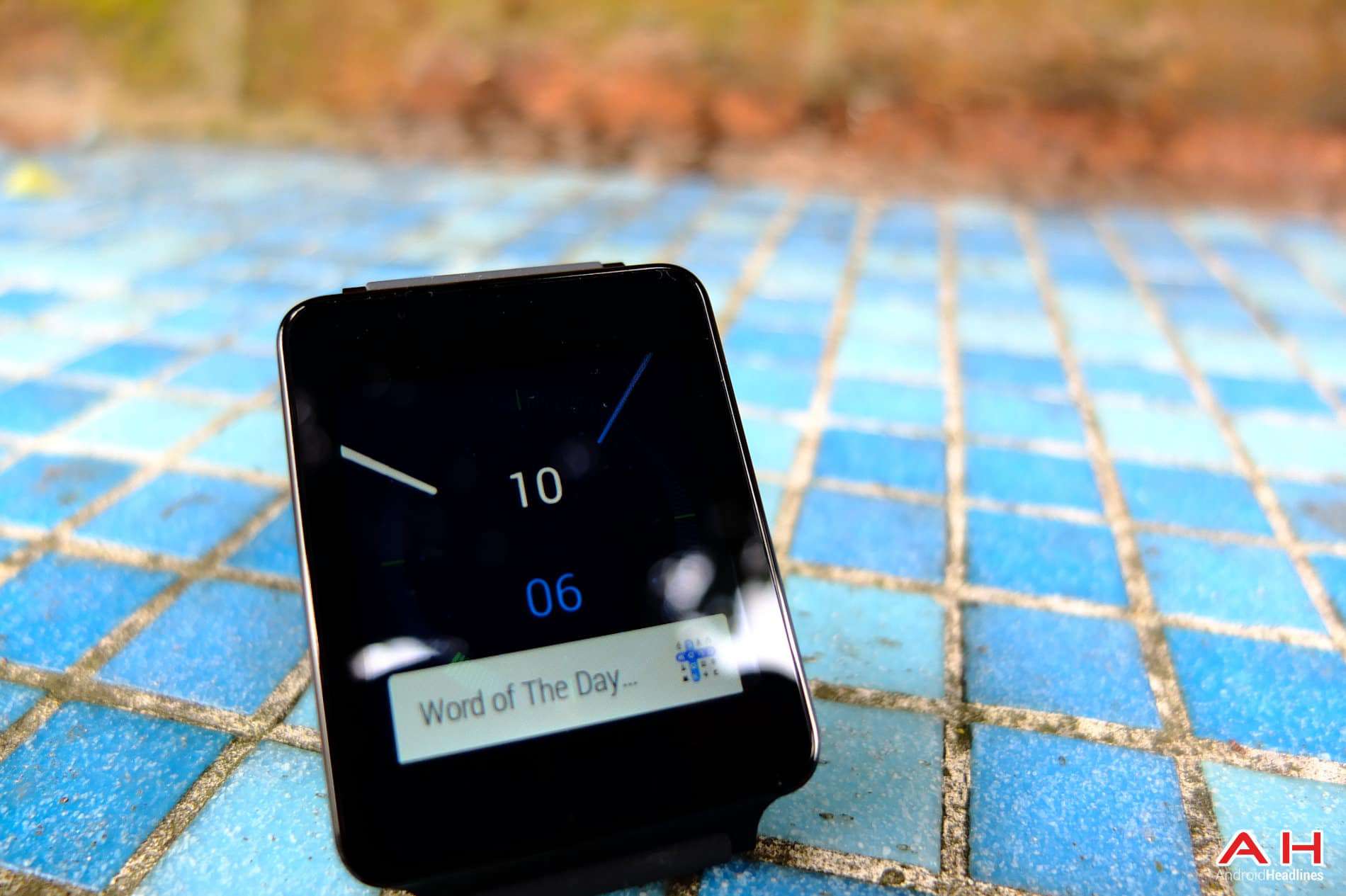 We’ve addressed the battery life and how the G Watch looks, but what about the arguably most important part, the display? Well, the G Watch’s display is a bit of a mixed bag. We’ll start off with the good, in that the 280 x 280 display resolution is fairly crisp, viewing angles are pretty great for a watch, and the colors are fairly vibrant. It’s very responsive as well, very rarely did I have to press multiple times to get the display to respond, but I did have to be accurate when hitting things like the archive button in GMail.

While it’s all fun and games indoors, the G Watch falls apart in the sun. I recently spend 6 months or so wearing a Sony SmartWatch 2 day in, day out and while that smartwatch had some shortcomings in a lot of areas, I could always see the display in sunlight. It was easy to read and the brighter it got, the brighter the reflective display got. The G Watch however, is useless in its sleep mode and while things get better when you wake it up, it’s still pretty poor. The display gets nice and bright and all, but the glare from the G Watch’s glass face is just awful, it’s glare city with this thing and that’s a real shame as the display underneath is pretty good, even if LCDs are awful in direct sunlight. 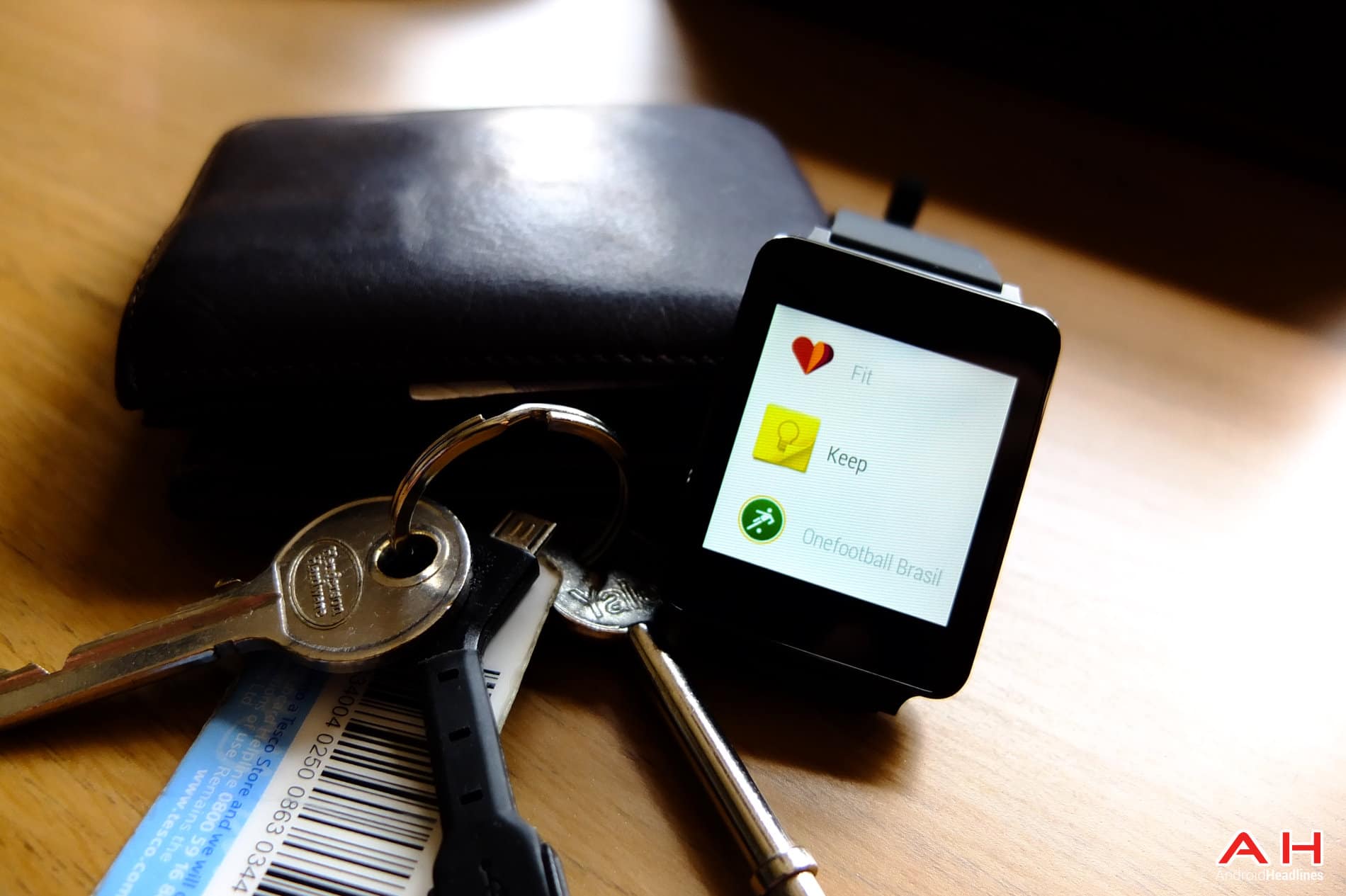 I led in this review with a picture of the weather card on the G Watch showing a nice, 15 degrees (that’s Celsius, folks) and the G Watch is just that, sunny with a few clouds here and there. It’s nice, it’s comfortable, but it could be a whole lot better. The skies aren’t completely clear and it’s not that exciting right now. However, the hardware is good if not a little bland, and with more apps and better support for Wear, the G Watch will get better in time. Right now though, it’s not the second coming of the smartwatch we all thought it would be. The Moto 360 will surely offer much better hardware and by then more apps will be available.

If you want a smartwatch for notifications and maybe a little light utility, then the G Watch – and Android Wear – have a lot to offer you, but otherwise it’s not that exciting and not really that useful. Yet.