Skip to content
Trusted By Millions
Independent, Expert Android News You Can Trust, Since 2010
Publishing More Android Than Anyone Else
19
Today
141
This Week
631
This Month
4625
This Year
114652
All Time Last year, Lenovo released the Yoga 8 and Yoga 10 tablets. We didn’t hear much about them, until recently when some new reports came out that it has amazing battery life. In fact, it’s difficult to kill the battery on these things. And Lenovo has done that yet again. The Lenovo Yoga 10 HD+ has improved in a few places over it’s predecessor, one being the screen. One of the big selling points for the Yoga is the fact that it has a built in stand. So if you use your tablet to watch movies or TV Shows, you can use that stand to stand it up and watch them. Making it easier on your arm, so you’re not holding it the entire time. As far as specs go, we’re looking at:

As you’d expect from Lenovo, the hardware on the Yoga 10 HD+ is pretty good. It’s made of mostly aluminum on the back with a glass front. It feels great in the hand and is relatively light except for the bump at the bottom where the stand is. When you open the stand, you are able to get to the microSD card slot and the SIM card slot (although this is the WiFi only model). On the bump at the bottom is the 8MP camera as well, which takes adequate shots for a tablet. It wouldn’t replace my smartphone though. Now on either side of the bump you’ve got your power button and headphone jack, with the micro USB port on the left side of the tablet and the volume rocker on the right side. On the front you’ve got your two front-facing speakers and your display. Oh and don’t forget your 1.6MP front-facing camera.

More on the speakers, as this is one of my favorite features here. It definitely won’t compete with Boomsound. But having front-facing speakers are still awesome. They work really well and sound great. I’ve been using the Yoga 10 HD+ for watching movies and TV Shows most of the week and have loved having these front facing speakers. Just wish more tablet makers would do the same. 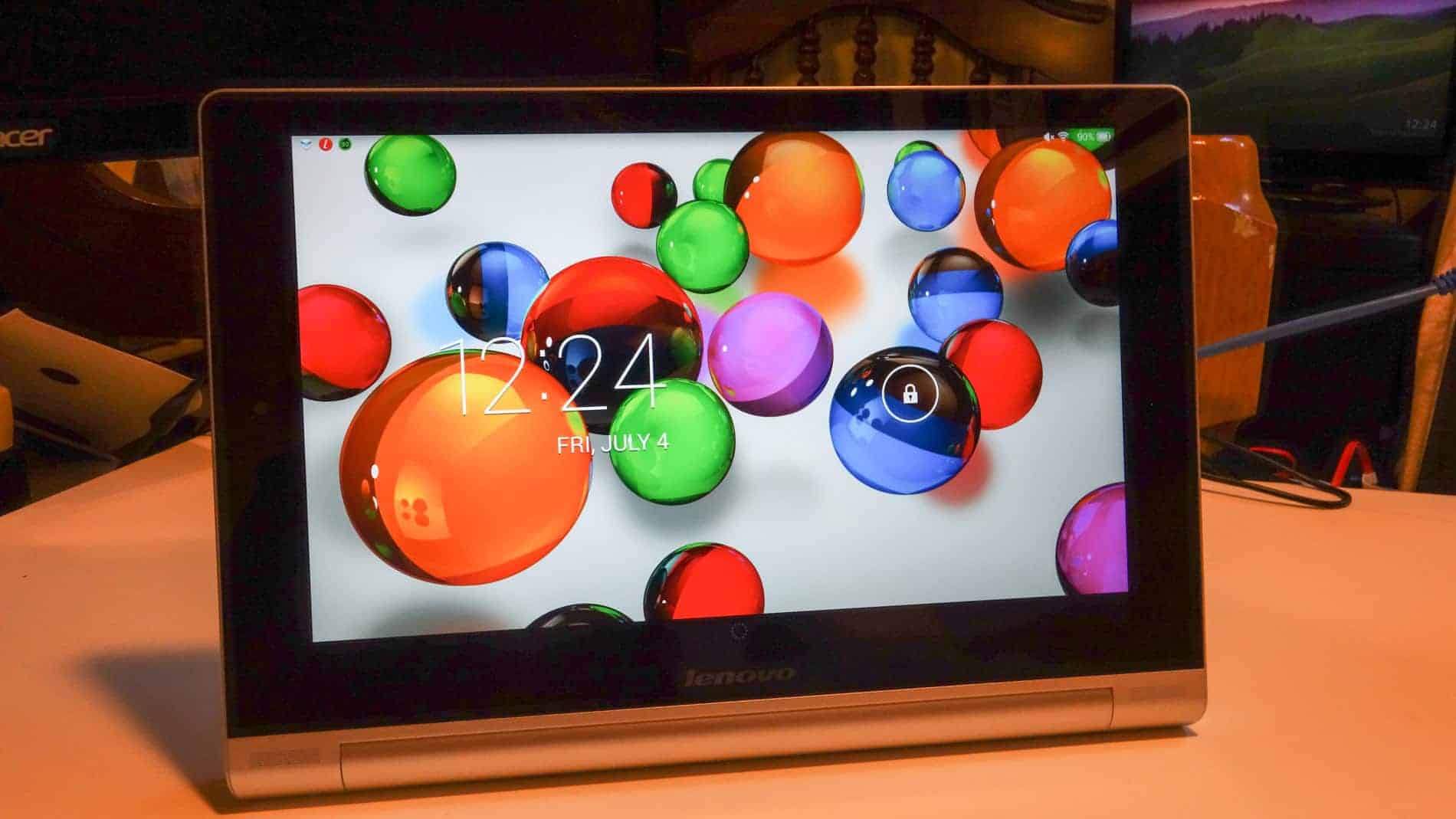 The display is notably different from the Yoga 10 which had a 1280×800 resolution display. It looks really nice actually. Now it doesn’t really compete with the 2560×1600 resolution display from the Galaxy Tab S or many of the other tablets out there. But 1080p is still plenty good on this thing, especially given it’s price. The Lenovo Yoga 10 HD+ is on sale for $349 right now, which is a pretty decent price considering most other 10-inch tablets are over $500 these days. 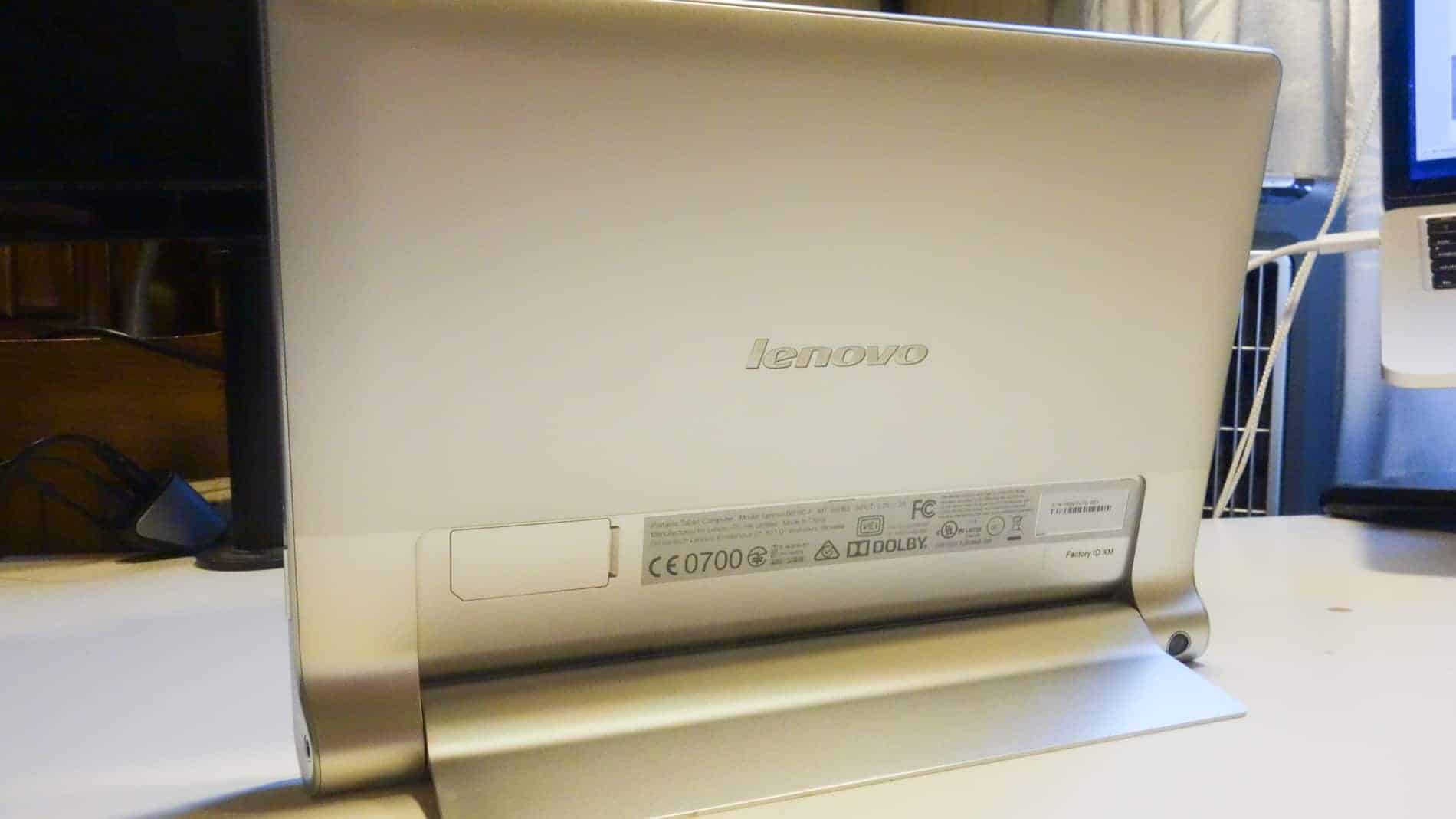 When many people see that a device sports a Snapdragon 400, they think “oh it’s a mid range device”. It may be, but it’s definitely not a mid-range CPU. I’ve used the Snapdragon 400 in a few different devices and have loved the way it works on everything. I’ve noticed zero lag issues, and zero performance issues in general. For the most part everything has been perfect. 2GB of RAM is still plenty of RAM, especially for devices with only a light overlay, like the Lenovo Yoga 10 HD+. Right now, it’s using 0.88GB of RAM and has 0.97GB of free RAM. Which is pretty good in my opinion. Of course with Android L we may want 3GB of more of RAM, but for now it’s plenty. 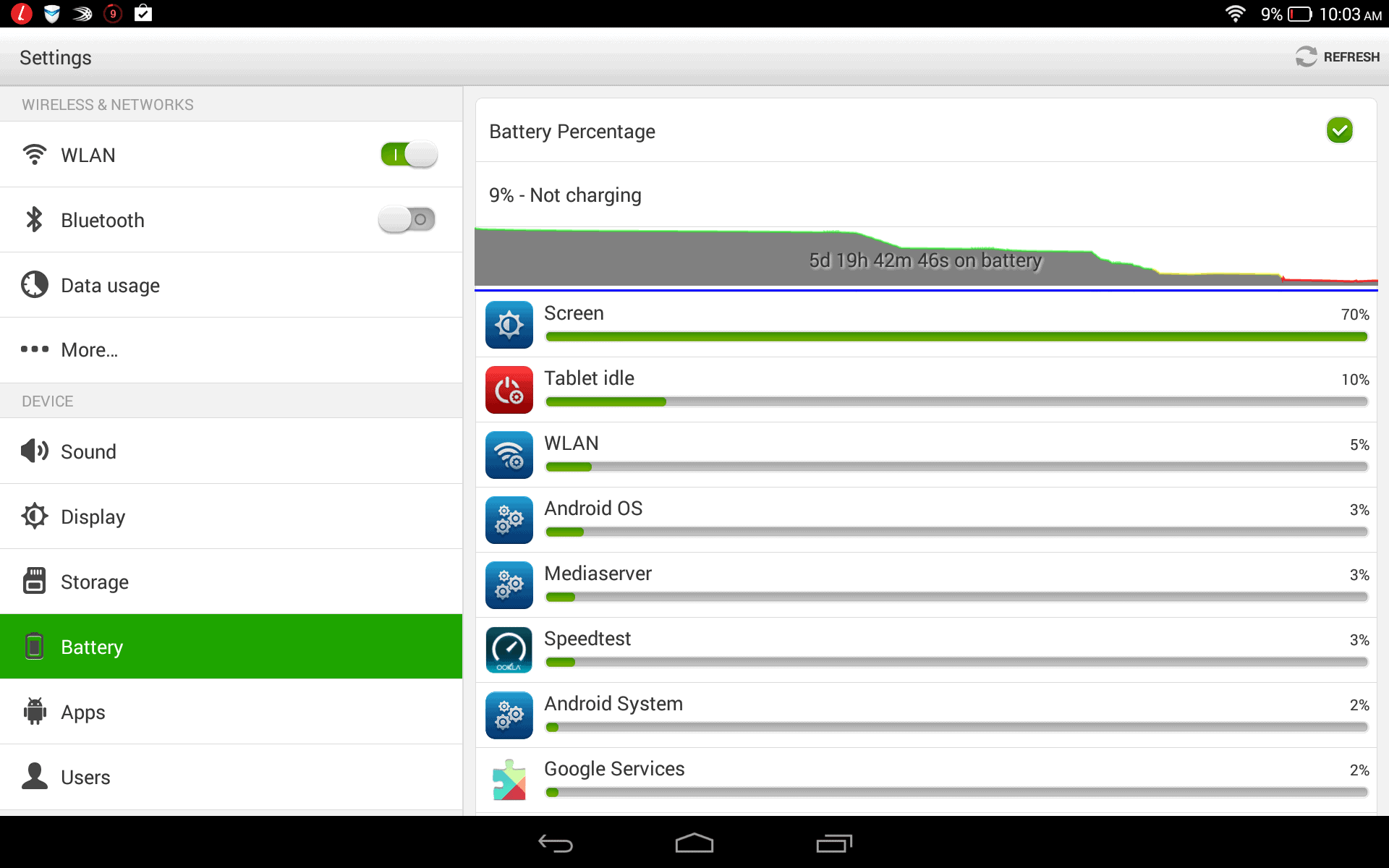 It’s amazing. As you can see from the screenshot above, I had the tablet off the charger for over 5 days – almost 6 – and it still had 9% left. It also got nearly 12 hours of on screen time. Pretty insane, right? This was the very first charge, and it’s only gotten better overtime. So if you’re looking for a tablet that will get you through a day or two, this will do that and much more. 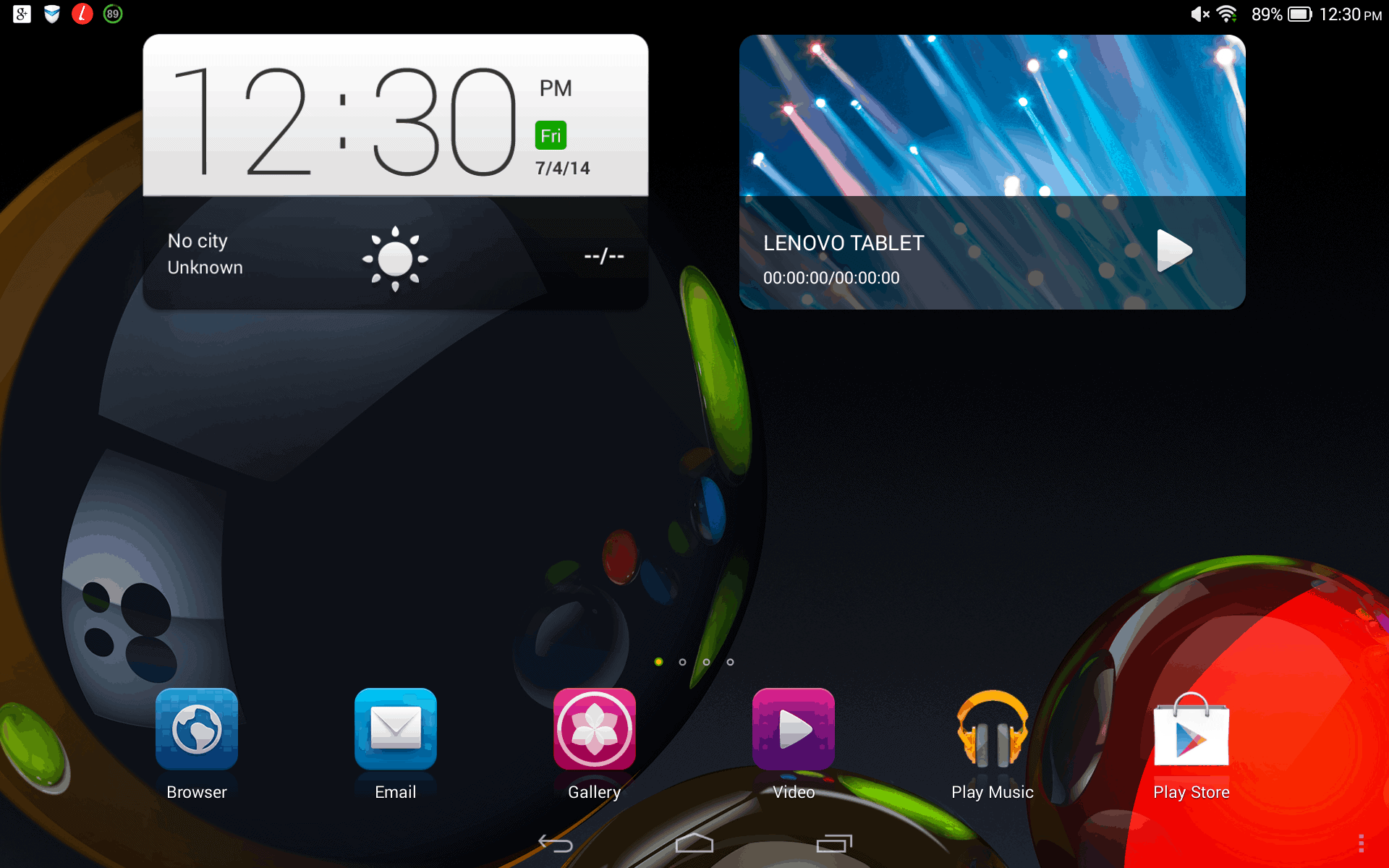 Here’s where things get interesting. It is running Android 4.3, and not KitKat, unfortunately. But Lenovo has overhauled their skin a bit since the last Lenovo tablet I reviewed. They’ve gone the route of no App Drawer, which seems to be common with Chinese OEMs. I’m not sure if that’s something that the Chinese like, but I’ve noticed it with Huawei, Xiaomi and a few other Chinese OEMs as well. So there’s no app drawer, which means you basically have an infinite amount of home screens. So how do you add widgets to your home screens? Simple. Just long-press on the homescreen and the widgets menu will pop up for you to go through the widgets and find the one you want. Then just simply drag it to the homescreen. Pretty simple, right? 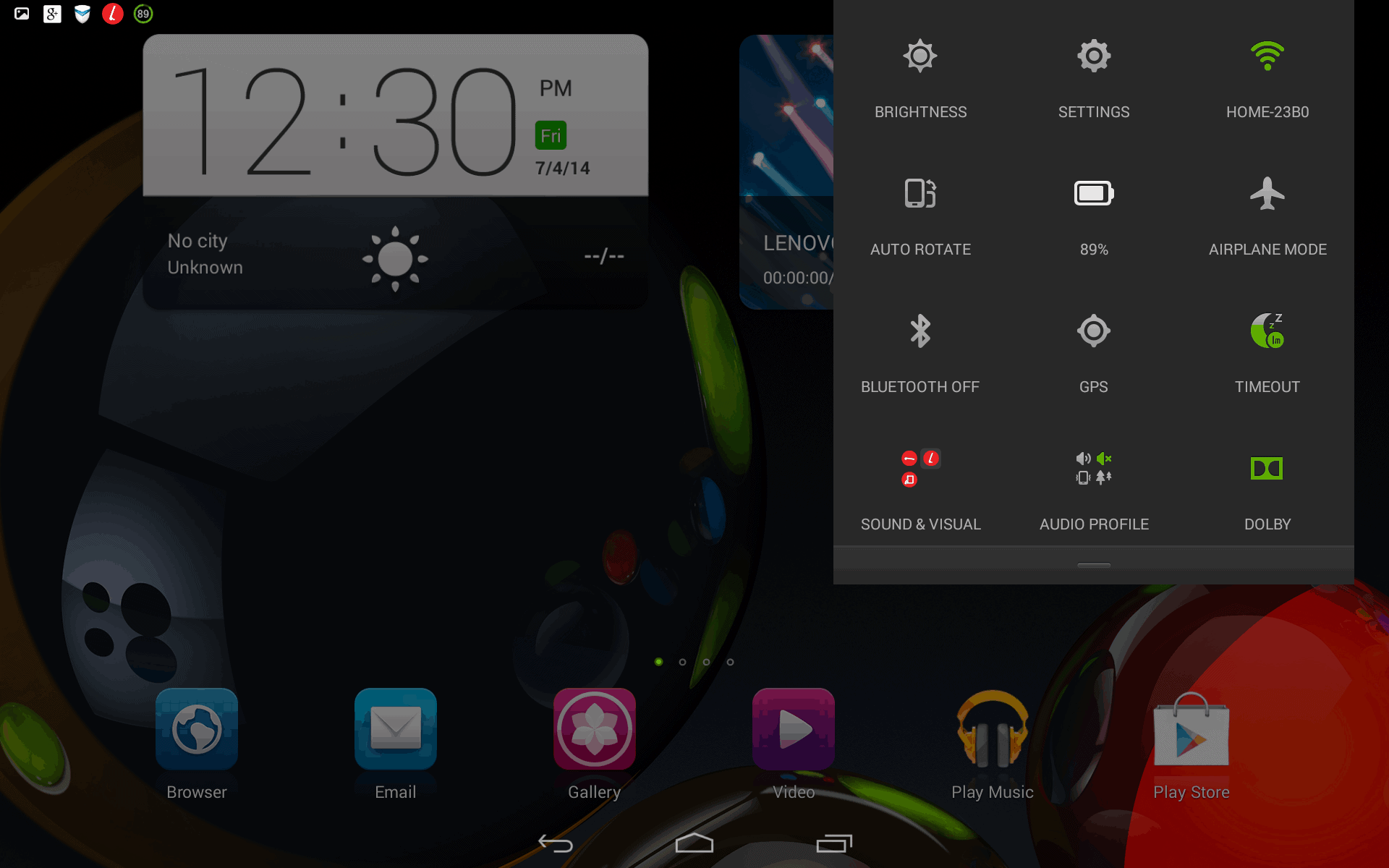 As far as the Quick Settings, it’s still there. Similar to how it works on the Nexus 7 and 10, all you do is swipe down on the right side for Quick settings, and the left side is your notifications. Now they have changed the color a bit. It’s gray and green. Which actually matches the sleeve that they sent out with the Lenovo Yoga 10 HD+. Now another interesting feature is the “Sound & Visual” tile in the Quick Settings. This allows you to change the sound based on how you’re using the tablet. Whether it’s in stand, tilt, or hold mode. I keep it in stand mode since that’s how I use it most of the time, and it brings a sort of surround sound to the tablet. And it’s really nice. 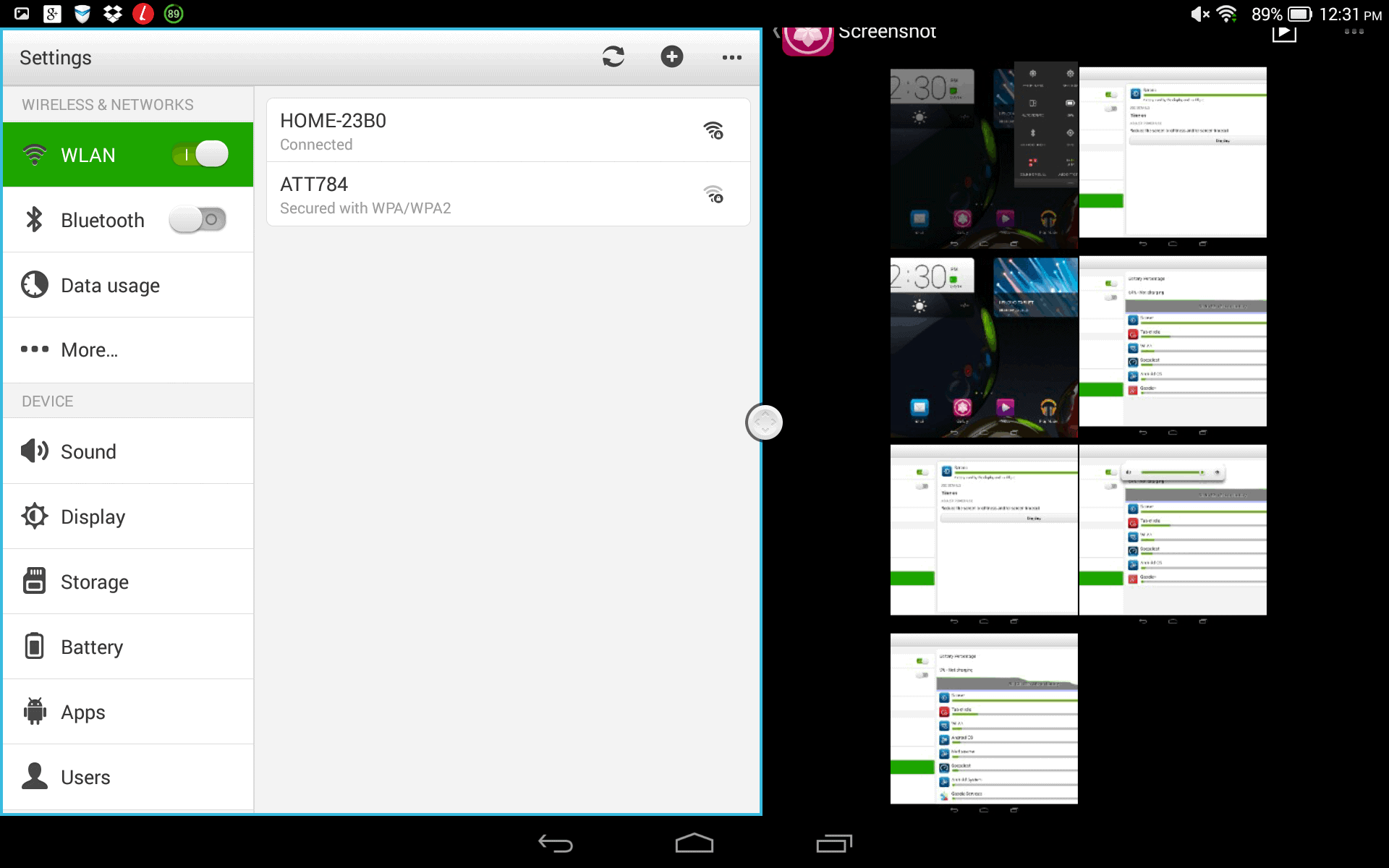 Lenovo has also implemented multi-window. Which is super simple to use. Just hit the recents key, then drag the app you want to put into multi-window and voila. No having to long-press the back key. However, like with most devices, not all apps are compatible. Which does suck. But it’s nice to have four apps on the screen at the same time.

There’s not much to say here as we aren’t big fans of using tablets for pictures. But it is important to test out the camera. Which you can find pictures from the camera down below. The Lenovo Yoga 10 HD+ is a great media consumption tablet. With it’s amazing battery life and the built in stand, it’s hard not to use it for watching movies and even watching TV Shows. Which is what I did with most of the time i was using it. Build quality is top notch and so is the price. Only $349. Kinda hard to beat that, in my eyes at least.