Chromebooks have done very well for themselves in business-to-business (B2B) sales. The latest report from research group NPD has found that last year, Chromebook B2B sales have risen 250 percent.

Chromebooks are Google’s answer to notebooks with cheaper pricing. They operate on Google’s cloud service known as Chrome OS and bring everything Google has to offer the web into one neat little package. Currently, Chromebooks are made by multiple companies ranging from Acer, Samsung, HP, Dell, Lenovo and others. During the first five months of 2014, Chromebooks took home 35 percent of all commercial sales of notebooks-an estimated total of 1.4 million units sold.

Chromebooks sales even rose 40 percent in just three weeks towards the end of the first half of 2014. Those sales are expected to continue rising during the back-to-school season coming up. Stephen Baker, the vice president of industry analysis firm NPD Group said, “Chrome’s unit strength ahead of this year’s education buying season shows how it has become a legitimate third platform alongside Windows and Mac OS X and iOS.” While the numbers that NPD Group presents are impressive, there are a few things to consider first. NPD Group only receives data from a set number of retailers, businesses and resellers. Their numbers also are only B2B, meaning not sales to individual consumers. So the numbers presented are only from businesses, schools, governments and other organizations selling and buying Chromebooks in bulk.

Still, NPD Group went into smaller details in their research that even shows specific companies behind the Chromebooks that were sold and their numbers. For example, Samsung has seen a 40 percent drop in their Chromebook sales. This could be due to the large amount of other OEMs stepping into the space and creating Chromebooks of their own that may be smaller, lighter, and cheaper. Some examples of companies that have done just that are Toshiba, Acer and Dell. Dell even made a Chromebook specifically aimed at the education market, meaning struggling students and schools. The breakdown percentage wise can be seen in the chart below, though the numbers are Samsung at 48 percent in the first half of 2014. During the same time frame, Acer took 31 percent, and HP took home 17 percent. The rest of the OEMs manufacturing Chromebooks fell into the “other” category which represents 4 percent of the sales. While sales of Chromebooks may be on the rise, there is a competitor who is gearing up to enter the market as well.

Microsoft has launched campaigns to end the idea of the Chromebook-Scroogled. They claimed that Chromebooks are worthless due to the fact that the OS revolves around internet access. Which if you’ve owned or used a Chromebook, you more than likely know that’s not entirely true. That said, Microsoft is just about ready to enter the market with similar pricing very soon. Microsoft is planning on their notebooks pricing to be equal to Chromebooks with the lowest option coming in at $200. Currently, Microsoft is working with manufacturers to bring their Windows 8 notebooks to life. They will be available sometime near the end of this year, more than likely holiday season. The entrance of Microsoft into the $200 notebook market will definitely put Google’s Chromebooks to the test.

So let us know, are you happy with your Chromebook, or are you ready for Microsoft’s version? Let us know down below or on our G+ page. 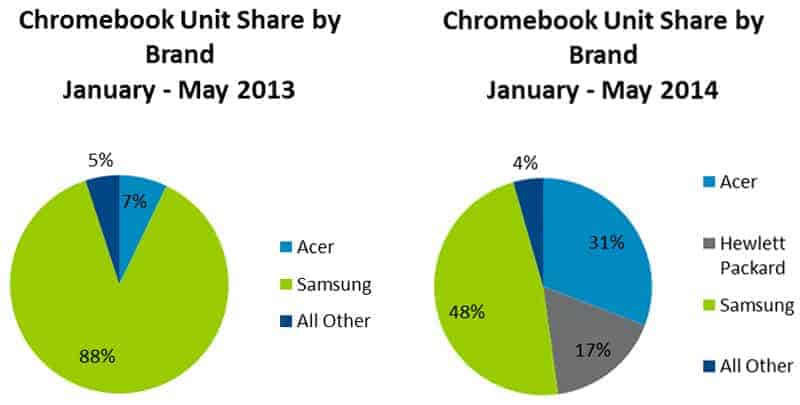