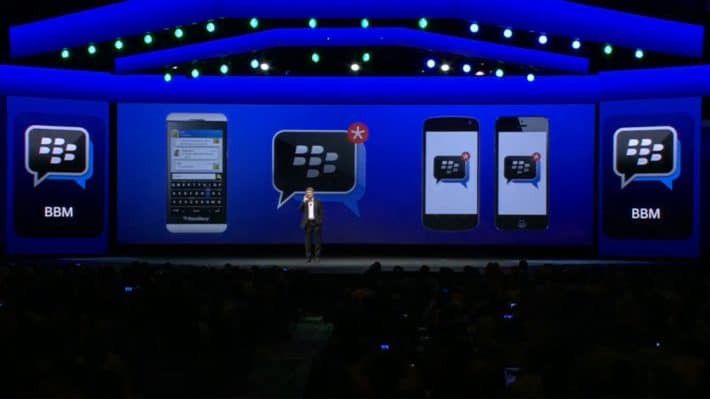 On July 29, 2014, at the Blackberry Security Summit in New York, John Sims, BlackBerry's President, Global Enterprise Services answered questions about the future of the BlackBerry Messenger (BBM) platform. After speaking about the rollout of BBM on Windows Phone, he indicated that the User Interface (UI) of the app would be getting a redesign on both the Android and iOS operating systems. He stated that in the past, BlackBerry leadership felt that BBM needed to have a consistent look and feel for users regardless of which type of device they were using. However, this is not the view held by current leaders in the company.

While BBM had been held in high regard when most business or enterprise users were working with BlackBerry devices, it appears that customer loyalty to the app has declined through the years. As enterprise users transitioned from their BlackBerry devices to company sponsored Bring Your Own Device (BYOD) programs with their Apple iPhones and Android devices, they learned how to use the native messaging devices on each of these platforms. To address the loss of their customer base, BlackBerry has in the past few years made the once popular app available on both operating systems, however, because interaction with the app was not consistent with either an iOS or an Android experience, many who downloaded the app deleted it after a few days of frustration.

While there is no time table for implementation of any changes, by addressing this issue and attempting to make the UI of the BBM app more consistent with either an iOS or Android (or even the upcoming Windows Phone) experience, BlackBerry appears to be acknowledging that the company may have more strength in software as opposed to the hardware they were once famous for. BlackBerry Messenger offers a number of services including BBM Protected, a service aimed at enterprise users, BBM Channels, a service designed to allow users to follow and get in touch with their favorite brands, and BBM Shop, a service that offers Stickers as a fun and interactive way to communicate. Blackberry is also testing BBM Money in Indonesia. This features peer to peer money transfer capabilities and bill payment services. BlackBerry Messenger also includes the ability to handle voice and video communications. All of these services seem positioned to place BlackBerry in a favorable market position.

While BlackBerry does have a number of advantages with the BBM app, it is important to remember that there are a number of competent competitors in the messenger app field. Skype, Viber and even Facebook have quality messenger apps that are extremely popular, and users are familiar with their design. The recent announcement that Facebook was requiring users to transition to their stand-alone messenger app signifies how serious these other providers are about the segment as well.