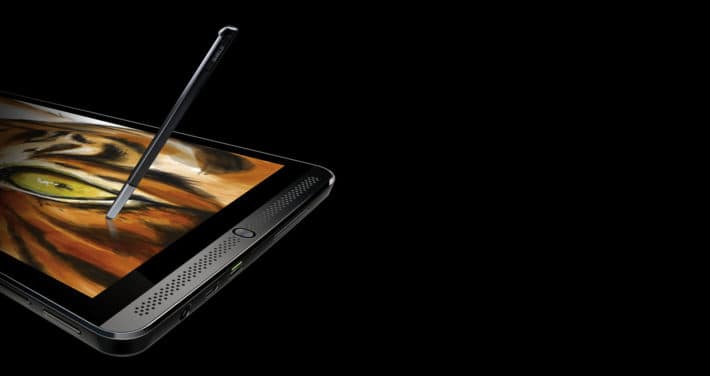 Gaming on tablets can be the single best experience for gaming on mobile devices. The screens are bigger, they can put out some great quality sound and some of them are quite a bit more powerful than most smartphones out there. They generally provide an all around better experience when it comes to mobile gaming. The smartphones however can make things a bit more portable, which is nice, but the complete package of the power and performance as well as a larger screen can make for a truly immersive gaming experience on mobile. This is where Nvidia’s new Shield Tablet comes in. Unlike their original Nvidia Shield gaming handheld which was like a controller and large smartphone display rolled into one device, the Shield Tablet is an 8-inch tablet with a Full HD display and driven by the ultra powerful Tegra K1 processor, to provide superior graphics and the best of any gaming experience. Nvidia is toting this tablet as the ultimate tablet for gamers and they just might be right.

There are many factors to consider here that could make the Shield Tablet a complete powerhouse, but lets start with what you get for the price. The Original Shield Started out at $299. You had the controller and 5-inch screen built into one device for a really awesome dedicated gaming portable. It also ran near the latest version of Android for the time and was powered by the Tegra 4 CPU. Many thought it was a bit over priced for what you were getting, and while you could use it as a tablet device since it was Google certified with the Play Store built in, it just wasn’t what some people were looking for. Nvidia gradually dropped the price down though and now it resides at a cool $200. Now lets take a look at what the Shield Tablet gives you in comparison. You have the starting price of $299, which may end up coming down in time and who knows, Nvidia could even end up throwing out some bundle deals at some point. That $299 price though gets you set up with an 8-inch Full HD Tablet with a Tegra K1 CPU that features 192 graphics cores, dual front speakers, 2GB of RAM, 16GB of internal storage, and the added option of the Shield Wireless Controller for an extra $60.

Let’s be clear, this is not to be your end all be all gaming device. It is not intended to replace the possible experiences one would have with something like a PS4 or an Xbox One. So while you could purchase one of those systems for just a little bit more, the Shield Tablet is exactly that, a tablet, and not a device meant to make you choose between it and a console.If you find yourself at odds however and want both but can only afford one, than you might be better off with a console. If you’re an individual who is in the market for a tablet specifically and you love to play games as well, this is the tablet you should be considering. It is likely a veritable powerhouse for gamers, and every gamer should be salivating over the Shield Tablet, but it can also serve as your tablet for regular every day tablet purposes that are not in any way related to gaming. Nvidia is not trying to target people who are looking for the ultimate gaming setup. They are trying to catch the attention of those who are looking for the ultimate gaming setup within a tablet. Because it has this versatility to it to be a really great tablet but also provide gamers with an unprecedented experience for playing some of the most visually stunning and impressive games(that are also fun of course), it will most likely do very well. For the price this is almost too good to be true.

Just in case 16GB of storage is not enough for you(which is the amount of internal space you get with the $299 model), and it likely won’t be if you like to play games like I do that are graphics rich and large in size, the microSD card slot can be of major assistance to help you expand on that space to make more room for some of the best and most impressive games that Android has to offer. Nvidia does offer the 32GB model for an extra $100, which also comes with LTE, if you’re someone that will need the use of a mobile data connection when away from WiFi networks. That is another factor that may end up being a strength for the Shield Tablet. Having a second model available for consumers that can connect up to a wireless carrier’s network to always be connected is a major step up over the original Shield. There’s also the inclusion of the 5MP front and rear facing cameras for pictures and video chat, and the DirectStylus 2 which can be used for note taking purposes or anything else you might want a stylus for. When you compare this to just about any other tablet out there, whether they be at the same starting cost or at a higher price, they likely won’t be able to outclass the Shield Tablet when it comes to gaming. If you have supported gaming PC hardware, you can even use the gamestream feature to play games from your steam account, which no other tablet will do with near the same quality. For the price, and the hardware that makes up the Shield Tablet, this is very likely to be a very successful device in the tablet space.