This year has been an incredible year for Amazon. The company shook the tech world when they released their first ever smartphone called the Fire Phone. Since the Fire Phone has taken stage, Amazon has been relishing the moment. Although it may look like Amazon is walking on new territory with their first smartphone, the Fire Phone isn’t Amazon’s only hardware device. The Kindle Fire HDX is another big seller that Amazon proudly holds and from new developments, will be getting beefed up this year. According to the AnTuTu database, the Kindle Fire HDX will be getting a more powerful processor inside.

Now before we get too carried away with this, I would like to point out that the move made by Amazon isn’t new. as GforGames puts it, “there’s a new “trend” in the mobile world.” That trend is mobile manufactures relying more on beefed up versions of current flagship devices. Nothing new and innovative is popping up anymore. The only “new” we get is a phone we already have with a better processor and graphics. With Amazon’s Kindle Fire HDX, the same will happen with it. According to the database, the HDX will soon get a Snapdragon 805 SoC that features a quad-core processor clocked at 2.5 GHz per core and a more powerful Adreno 420 GPU. The current HDX tablets only have a Snapdragon 800 SoC and an Adreno 330 GPU.

With new hardware on board, the Kindle HDX should be really fast. Other than a more powerful processor, the HDX will have an 8.9 inch display with 1600 x 2560 resolution. On board will also be 2GB of RAM, an 8MP rear camera, and a skimpy 1MP front-facing camera. All of the specs are pretty much the same as the current Kindle Fire HDX except for one thing, this device is running Android 4.4.4. Not all information in database’s are true and if this is, Amazon will probably have their own “Fire” interface laying on top. It is interesting to see that Amazon would consider using a different operating system.

There is no word on when Amazon will release the beefed up Kindle Fire HDX. With a Snapdragon 805 SoC sitting inside, Amazon should have no problem pushing them off their shelves. Let us know what you think about the updated version of the Kindle Fire HDX. Do you really think they will have Android 4.4.4 running on it? Let us know in the comments below and you can also check out a screenshot of the information from the database. 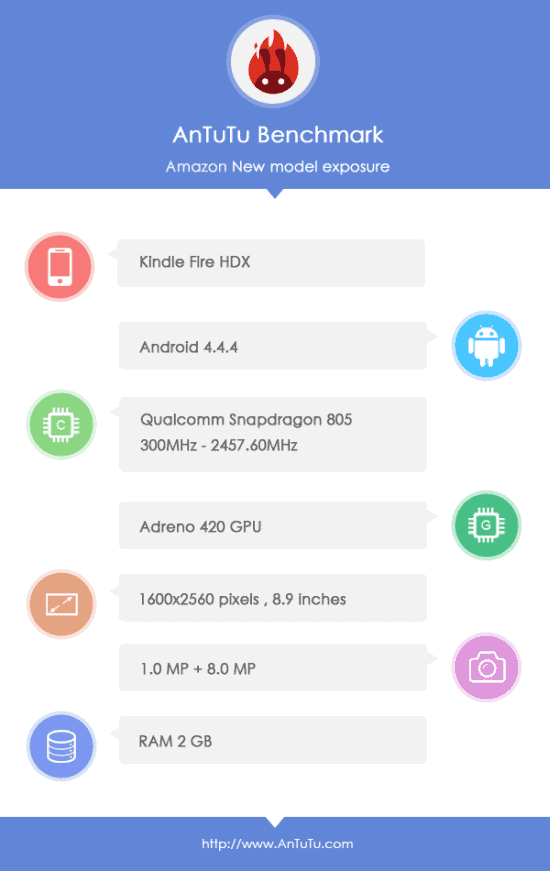