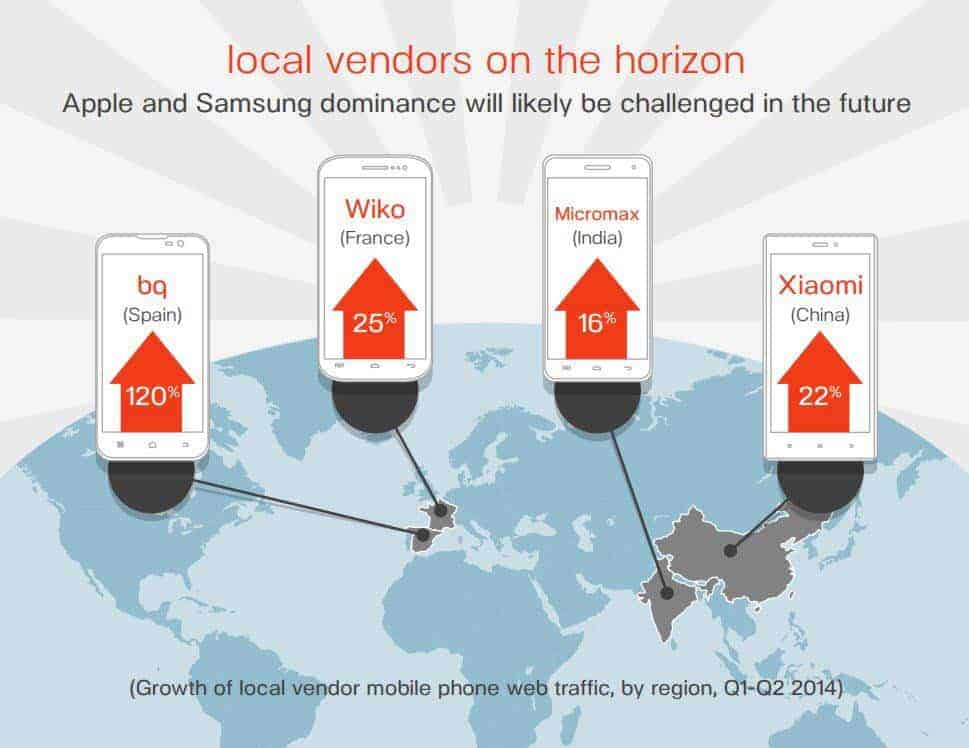 Netbiscuits Web Trends Report for the second quarter of 2014 predicts some interesting trends based on their sampling of web traffic – "almost one billion page impressions per month."  This quarter they looked at how the mobile phone brands and marketers should prepare for the future in order to offer the best-in-class Web experience.  They also looked at how the mobile phone landscape is evolving and why the changes that they are seeing must be both recognized and acted upon by the industry.

It is no secret that the field of mobile communications is growing at a very rapid rate, changing our lives as much, or more so, than the advent of television or the internet.  Our mobile and fast-paced lifestyle demand creates more of a reliance on our wireless mobile and web usage than ever before.  The providers of those services need to meet the demands for the future and be prepared to deliver the right experiences to their mobile customers – which marketing shows is increasingly focus on social media, which sometimes means that the developers need to take into account the local markets in which they operate.  The study sites five key factors…introducing lower priced devices into new market segments – the evolution of screen size and resolution as demanded in the local segment – software preference and choices help define the consumers in that region – the speed of the networks in those regions and countries – and watch the grow of new platforms, such as Smart TVs and their Apps and the recent trend towards Wearables.

Despite the fact that Apple and Samsung dominate the world's phones for searching the web, in certain areas, newcomers are starting to make an impact – such as in France, a Wiko device entered the Top 25 of the most used devices.  In Spain, there was newcomer, bq, in the Top 100.  This study suggests that we may be seeing "the beginning of the end for the Apple-Samsung deadlock."  This is always the business cycle – one or two dominate players always rise to the top and control the market for as long as it takes local vendors to develop, refine, and sell their own devices – often much cheaper and a better value.  Slowly, but surely, these smaller vendors will increase their sales while the still dominant vendors start to lose sales and market share due to the market saturation. In India, one of the fastest growing markets worldwide, we have both local vendors, Micromax and Karbonn increasing their share of the Top 100.  In China, Xiaomi stole a share from both Apple and Samsung – representing over 10-percent of the Top 100 for the first time.  Oppo and Coolpad both saw their share rise from the first quarter to the second.  Although Japan remains a strong market for the iPhone, their own brands of Sony, Sharp, Fujitsu, NEC and Panasonic each saw a phone in their top 25.  Because  these local vendors best know their local customers – this will add pressure to Samsung and Apple to compete.

When it comes to screen or display size – due to increased iPhone 5S usage, globally the largest growing segment was 4 – 4.49-inches.  However, there is a definite trend toward larger screen sizes, especially in the U.S. where the 5 – 5.9-inch category will increased dramatically and studies show that it will continue to increase.  This category grew from a 21-percent share in the first quarter to 25-percent in the second quarter of 2014.  The average physical phone size has increased in all countries worldwide.  Although a small overall percentage, the 6-inch plus category had the fastest growth – a trend they believe will continue…and one that Apple needs to address.

Besides screen size, screen resolution is another obsession of vendors – each trying to outdo one another.  Steve Jobs decided that 326 pixels per inch (Retina Display) was the optimum resolution for a mobile display, however, we continue to see the average pixels per inch increase, although it is gradually slowing down.  Right now, 1136 x640 is the most used resolution with 1920 x 1080 the second most used with South Korea, the U.K. and the U.S. using the highest resolution displays.  Color correctness and contrast should be the real concerns of the vendors, although they expect even higher pixels per inch (PPIs) to increase in the coming quarters.

Software saw Android increase its worldwide dominance from 55-percent in the first quarter to 57-percent in the second – iOS remained unchanged at 32-percent – Windows Phone held 3-percent – and 'Others" had 8-percent.  They predict that Android will continue its growth and that in 2014 there has been a big upsurge to Android 4.4 KitKat, which offers developers more engagement with users through app indexing. When it comes to internet speed, we just cannot seem to get enough, with South Korea (76-percent) and the U.S (67-percent) having the most access to 4G LTE web speeds.  This is followed by Sweden (47-percent), Japan (45-percent) and Canada (43-percent).  The users are quick to leave slow internets as faster ones become available – even in Africa (30-percent) they are demanding more access to 4G.  What is so surprising is that in China, only 7-percent of the people have access to high-speed internet – one reason their devices our mostly 3G and not competing yet in the world arena where we demand 4G.  So while our experience in the U.S. for web browsing is very good, in other parts of the world, it can be a painful experience.

This study shows that our mobile world is growing and changing at a rapid rate and that local vendors are beginning to service their users, because they know them best.  However, there needs to be more high-speed wireless service available to all countries and when that happens, the local vendors' devices can then be sold on the global market.  This will challenge Samsung and Apple even more in the future – first in their own country and then there will be a global challenge as well.  It also suggests that marketers must keep up with these changes if they expect to engage the users. Please hit us up on our Google+ Page and let us know what you think about Samsung and Apple versus the newcomers like Oppo and Xiaomi…as always, we would love to hear from you.