Google’s Chromebooks are fast becoming the go-to device for people wanting quick and easy access to the internet without all the bloat that a more conventional operating system carries. With schools being responsible for buying more than 1 million Chromebooks for their students to carry out research and complete their homework on, they are becoming a force to be reckoned with, as witnessed by Microsoft’s attempts to dismiss the Chromebooks abilities. So how popular are they? Well, over 1.8 million Chromebooks were shipped between April and June this year, with Acer managing to grab the top spot from Samsung in terms of shipments according to the latest industry figures by TrendForce.

As you can see from the pie-chart below, Acer have managed to snaffle up 30% of the 2nd quarter sales, an increase of 6% over its 1st quarter figures. Samsung aren’t far behind with 24% with HP snapping at their heels with a respectable 21%. As for the remaining 26%? Well, that’s shared between companies such as Lenovo, Dell, Asus and Toshiba who have all released new models with competitive pricing. Part of the attractiveness of Chromebooks is that there aren’t any licence fees to be paid, and Google takes care of any software updates.

One reason that Acer have jumped to top spot is that Samsung’s latest Chromebook offerings have been somewhat under-performing and yet over-priced, with the much-vaunted faux-leather coating not being a great draw for consumers. Samsung misjudged the market by powering its second-generation Chromebooks with its own Octa-Core Exynos CPU that has returned distinctly average performance levels, while it’s competitors have used cheaper, more powerful Intel solutions (Celeron and i3 Processors) to great effect. This pattern is likely to continue with Acer planning to use Intel’s Bay Trail processors in future models, and with Chromebook sales expected to reach 5 million this year, the competition is only going to get fiercer still. Chromebooks are expected to reach a penetration point of between 3 and 5% in 2014.

If you have a Chromebook, let us know which model and how you are getting on with it in the comments below or at our Google Plus page. 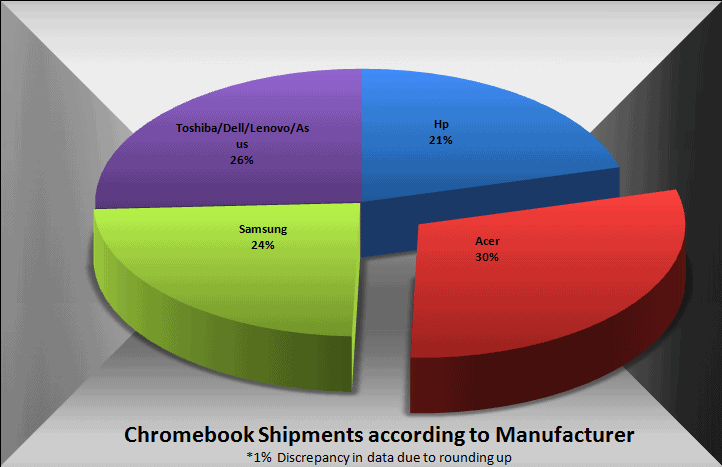