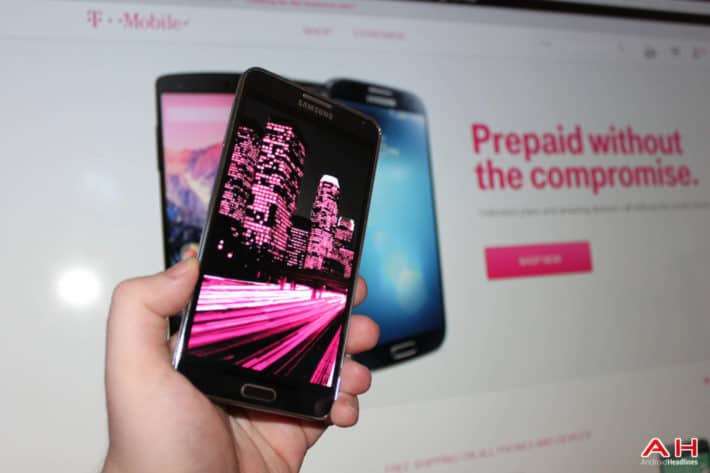 During T-Mobile's Uncarrier 5 event this evening, T-Mobile's CEO John Legere had a lot to talk about tonight. But the most important was his speech about the magenta network. You may remember that earlier this year, T-Mobile announced Wideband LTE in Las Vegas. Well that Wideband LTE is heading to 16 other markets today. These markets include Atlanta, GA; Birmingham, AL; Columbus, OH; Dallas, TX; Detroit, MI; Honolulu, HI; Houston, TX; Jacksonville, FL; Los Angeles, CA; Minneapolis, MN; Mobile, AL; Orlando, FL; Portland, OR; Seattle, WA; Tampa, FL
and Upstate, NY. This is 15+15MHz Wideband LTE, and in some areas it might be as good as 20+20MHz Wideband LTE which means that we are going to have a lot more bandwidth here and slightly faster speeds, which is going to be amazing.

T-Mobile is looking to get their LTE network covering 230 million POPs by the end of this month. Which brings them to number 3 for the size of their LTE network, behind Verizon and AT&T. They are also bringing VoLTE to more cities starting tomorrow. It'll also be available on a new device, and that is the Samsung Galaxy S5. VoLTE will be available in the following markets beginning tomorrow Atlanta, GA; Austin, TX; Boston, MA; Chicago, IL; Dallas, TX; Houston, TX; Long Island, NY; Los Angeles, CA; Minneapolis, MN; New Jersey; New York, NY; Philadelphia, PA; San Francisco, CA; Seattle, WA; and Washington, D.C.

Great news coming out of T-Mobile today on the network front. It's great to see more bandwidth, faster speeds, and VoLTE in more and more markets which is always great. T-Mobile continues improving their network, which is what we want and need as T-Mobile's customers. No word on the 700MHz spectrum just yet, but that's not expected to roll out until the end of this year anyways. How many of you are excited for Wideband LTE?