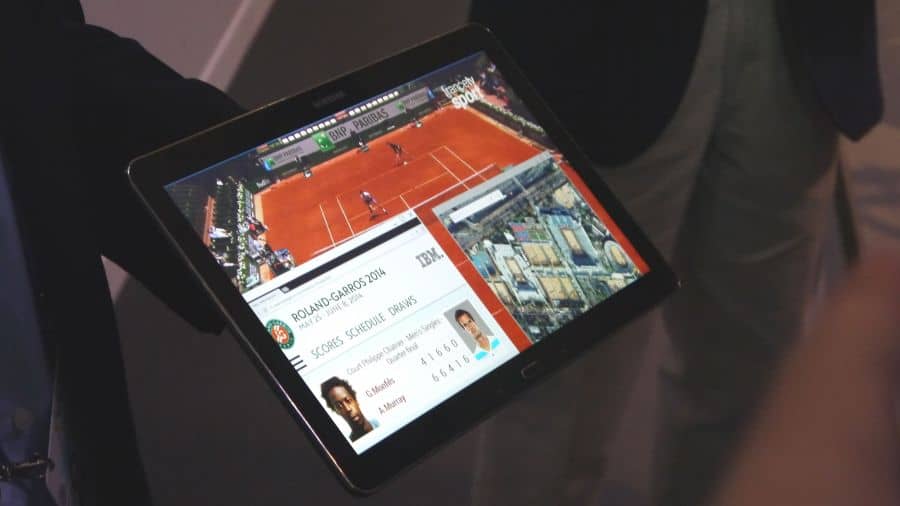 For a little while, we’ve been hearing that Samsung is working on a 4K capable tablet, that’s 3840 x 2160 at a 16:9 ratio, which is obviously a lot of pixels, a little over 8 Million of them. Samsung already has a high-resolution 12.2-inch tablet on the market, but it seems that a 4K prototype of the device has been recently spotted. UK news site TechRadar has apparently managed to snap the above image of a 12-inch Samsung tablet with a 4K resolution.

The tablet was being shown off during an LTE Broadcast demonstration at the French Tennis Open, but here is where things get a little fishy. The tablet was displaying a feed of only 720p in resolution (which is 1280 x 720 for you pixel lovers), and TechRadar is saying that it’s the extra information on top of the device that made them think it a 4K resolution tablet. The representative told the outlet that the device was using a Snapdragon 801 CPU, itself a chip not capable of such resolutions, so this will more than likely launch with a Snapdragon 805 (which is listed as supporting 4K fully) if it ever hits the market.

It’s clear from the image that this is a Samsung tablet and Qualcomm have already said in the past that 4K tablets will hit the market before the end of 2014, so there’s a good chance that this is in fact an Ultra HD tablet. Still, we have to question why the prototype has ended up at the French Open, but we guess these devices are out there in higher numbers than we think.

2014 has already been a busy year for Samsung on the tablet front and we’re sure the Korean giant has more steam left to give us such a tablet. With Netflix now available in 4K for select shows, 4K content is slowly but steadily making its way online and now, Ultra HD displays don’t seem all that needless any more. Samsung is holding an event later this month, which we’re presuming is the announcement of the leaky Galaxy Tab S duo, but if there is any 4K fun there, we’ll have all the news on it.