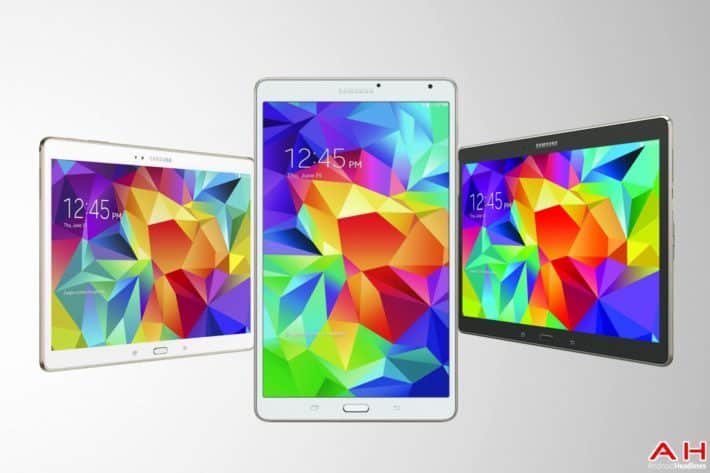 After much speculation and many rumors, Samsung finally unveiled the Galaxy Tab S yesterday at their Tab Into Color event. The tablet comes in two size models, one with an 8.4-inch screen and  one with a 10.5-inch screen. There was lots of exciting details about both tablets from the partnership with Marvel promising to bring awesome exclusive content to Tab S owners, to the availability of WiFi and LTE enabled models even though the WiFi only models are the only ones available for pre-order. While US consumers could immediately pre-order both sizes of the Galaxy Tab S WiFi only model through various retailers directly after the event including Amazon, if you live in the UK there is another way to get a hold of a Tab S if you're interested.

UK residents, Samsung knows that you might be hurting from the lack of pre-orders at the moment. That's why they're giving away one of the tablets as a prize to those who pre-register their interest in the Galaxy Tab S to show some appreciation. Along with the Galaxy Tab S Samsung UK is also giving the winner a 12 month subscription to Now TV. If you head on over to the Official Samsung UK website you'll find all the details you need and what the requirements are for the chance to win, and we have the link posted below for you so you don't have to go searching.

Don't think that Samsung has forgotten about us over here in the U.S. though, they have a contest for the stateside customers as well. If you pre-order either the Galaxy Tab S 8.4-inch or the Tab S 10.5-inch tablet, you'll be entered for the chance to win some really cool prizes too. The grand prize is a complete tech makeover that includes a brand new Samsung 65-inch UHD 4K smart TV, plus a set of Samsung SHAPE speakers to go along with it. There can only be one grand prize winner unfortunately, but there will be other prizes to potentially win, like a Galaxy S5, NX mini smart cameras, and Gear 2 smartwatches just to name a few. So is anyone excited about the Tab S? If so what excites you the most and what are you most looking forward to using?