Here we go with an odd couple of devices and low-end this time around, but hey, they need comparing as well. These low-end devices are perfect for a young person’s first time phone or an older person that feels they need a smartphone or their kids think they should have one for security.  As long as you are using the network they work on, why not save some money and buy an entry level device?

These two devices are very similar in some areas and very different in others.  Both devices are using the qHD display of 960 x 540 resolution and both are LCD technology, although they are different sizes.  They both have 1GB or RAM and both are packing only 4GB of internal storage and both have a microSD slot, although they allow different capacity cards.  They both have near identical battery sizes – 1980mAh on the Motorola Moto E and 2000mAh on the BLU Studio.

Take a look at the specifications below and see for yourself how they face-off, and then we will look a little closer look at each device and see if we can pick a winner in this comparison. 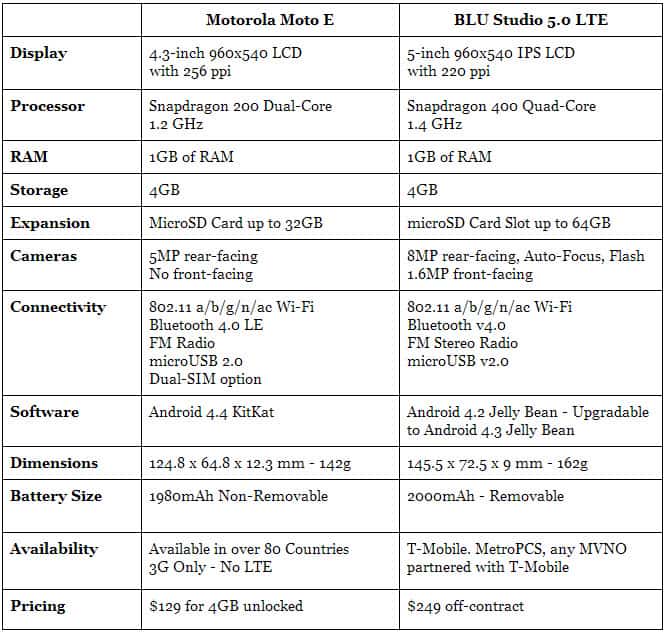 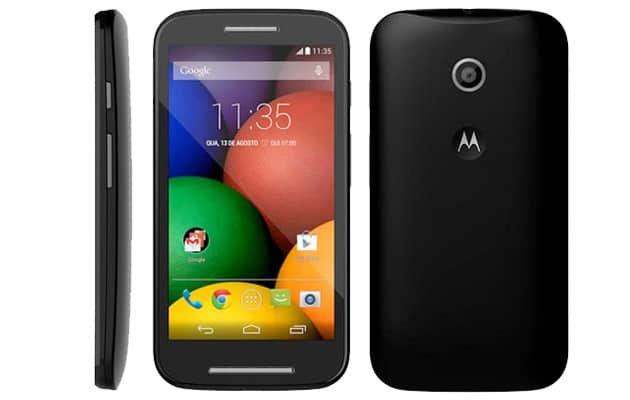 Motorola is going in a different direction ever since Google took over, and will soon take another turn once the new owners, Lenovo, take over.  First, they gave us the Moto X – and they proved to the world that a well optimized smartphone did not have to have the top specs to be a great experience.  Next, they brought us Moto G, the new device that everybody could afford in the emerging nations – no more hand me downs or buying a used device.  When we thought Motorola couldn’t do any better, they give us the Moto E – a pretty barebones device at only $129.

When compared to the BLU Studio 5.0 LTE, the 4.3-inch display is slightly smaller, the processor is a Snapdragon, but only the 200 dual-core model, compared to the 400 quad-core model in the BLU.  It does have a microSD slot, but only room for 32GB of additional storage.  The 5MP camera has no autofocus and no flash and there is no front-facing camera at all.  It does offer a Dual- SIM option for countries that allow you to switch back and forth for the cheapest calling rates.  It only offers 3G, so no LTE service with the Moto E.  It does run on Android 4.4 KitKat and feels like a quality device from Motorola.

BLU Products are headquartered in Miami, Florida and was founded in 2009, becoming one of the fastest growing mobile phone manufacturers in the world.  They sell devices in over 40 countries and they are beginning to make their mark in the U.S.  Their main focus is on prepaid and no-contact devices – mobile phones that offer a lot of features at very competitive price.

The BLU Studio 5.0 LTE is new model just released in May and sports a slightly larger (5-inch versus 4.3-inch) display.  The processors are both Snapdragon, however, the BLU uses the model 400 quad-core clocked at 1.4GHz versus the model 200 dual-core clocked at 1.2GHz on the Moto E.  The microSD card can handle up to 64GB, 32GB more than the Moto E.  The camera is only 3MP more, however, this 8MP shooter has autofocus and a LED Flash and it includes a 1.6MP front-facing camera for video chatting and selfies.  One disappointment is that the BLU only uses Android 4.2 Jelly Bean, with no mention of KitKat.  Normally we would say that an off-contract price of only $249 was a steal…but with the Moto E at only $129, it almost seems expensive. The phone is available in Neon-Yellow, Fashion-Orange, Glimmer-Pink and Ceramic-White and is shipping now…look for it on Amazon or at Best Buy

This was a tough decision – both devices have so much in common, but the BLU Studio 5.0 LTE model does have the better specs that are important to most people that own a smartphone.  The 5-inch display is just about right for most people. The processor is much better, higher microSD memory, a much better camera – 5MP versus 8MP and the BLU Studio also has a LED Flash and autofocus and a 1.6MP front-facing camera, a slightly larger battery, as well packing LTE.  It is true that BLU only comes with Jelly Bean, but most people will never know the difference. The things that draw one to the Moto E is their reputation, Android 4.4 KitKat and its price…only $129 versus the $249 of the BLU Studio, however, that extra money is well spent in my opinion…if you really want a barebones smartphone and speed and taking pictures means nothing to you, then grab the Moto E.

Please jump on our Google+ Page and let us know what you think about these two devices and which one you would rather own – if you only had a choice between these two devices…as always, we would love to hear from you.