This was really a tough call (yeah, I know, they are all tough calls), but here we have the Moto G, which has turned out to be Motorola’s best selling phone of all time, improved with both LTE and a microSD card slot up, against the new Amazon Fire Phone.  They look very similar, although the Moto G is just a tad sleeker looking and is very comfortable in the hands.  Remember, the Moto G LTE is not a flagship device by any stretch of the imagination – it is a solid, entry-level device, yet it holds up pretty well to Amazon’s only flagship, the Fire Phone.  Let’s take a look at what is similar about these two devices – the displays are almost the same size with the Fire Phone taking the lead on 4.7-inch vs 4.5-inch, however, they both have the same LCD technology and both sport just an HD display (1280 x 720p).  And then there is…wait, that is all they really share.

Please take a look at the specifications listed below and do your own comparison and then we will look at the two individual phones and how they differ – for better or worse – and the try and pick a winner of this comparison. 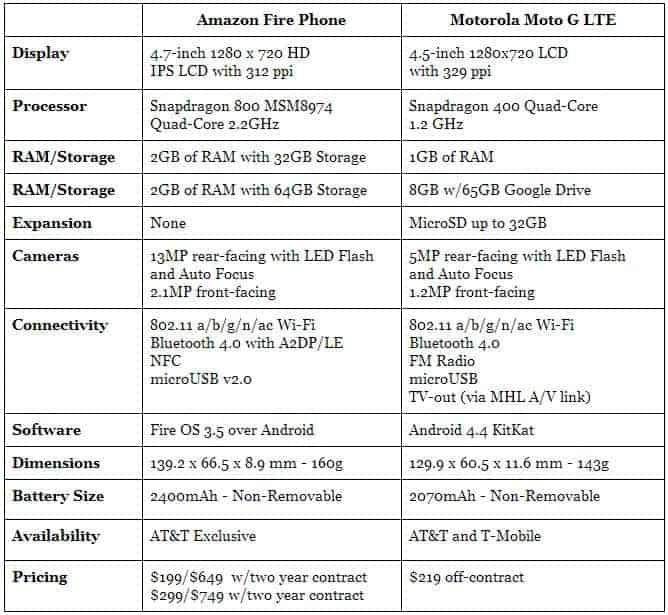 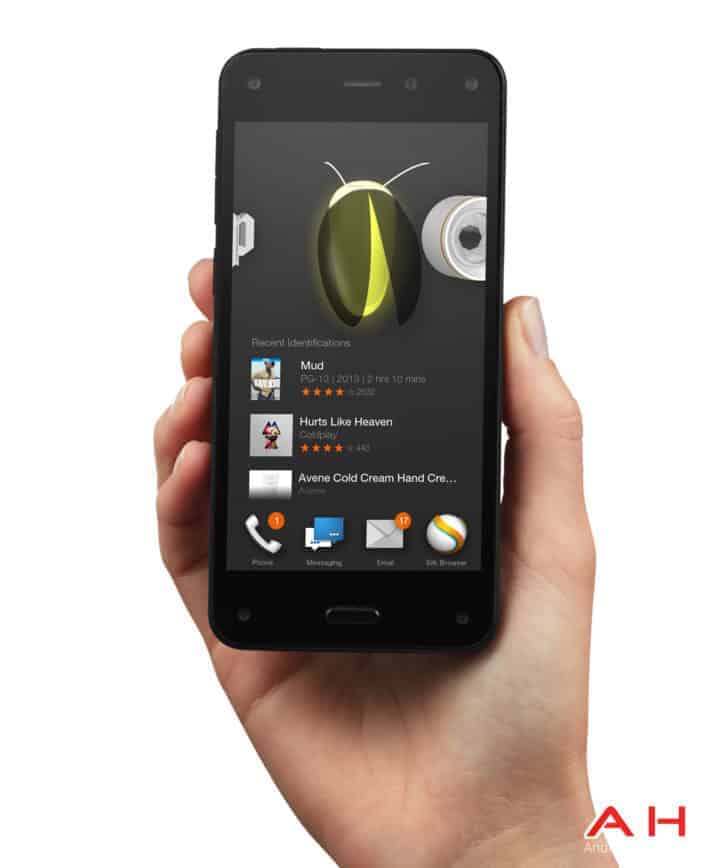 Amazon’s just released flagship, the Fire Phone, is designed to go head-to-head with the likes of LG, HTC, Samsung, and iPhone, but whether or not it is up to the challenge remains to be seen.  As with Amazon’s Kindle series tablets, the Fire Phone rejects the Google Play Store Apps for its own Amazon App Store and rejects Google – no Gmail, Maps, or YouTube…which could be a deal breaker for some.

Specification-wise, the displays on these devices are very similar, but that is where their similarity ends.  The Fire Phone uses last year’s Snapdragon 800 quad-core processor clocked at 2.2 GHz with a solid 2GB of RAM and comes with either 32GB or 64GB of internal storage and no room for expansion.  Other than no microSD Card, the Fire Phone beats out the Moto G LTE in these other areas.  Amazon is promising a great 13MP camera experience that certainly trumps the 5MP used on the Moto G LTE.  Even the 2.1MP beats out the 1.2MP on the front-facing camera of the Moto G LTE.  Another unique feature is the inclusion of four cameras on each corner of the display to give you a 3D look or “Dynamic Perspective” as they call it.  It also has what they call a “Firefly” button that will match the image on the display with over 100 million items, be it a song, movie or practically anything and then direct you to the Amazon store that can sell the item to you.  Lastly, it offers their Mayday, 24/7 365 day on-device video support.

In our Android opinion (of course) we would have to say that the Fire Phone would lose credit for its Fire OS v3.5.0 over the regular Android KitKat.  The loss of the Google Play Store and Google Apps are also a ‘black-eye’ – however the Google Apps were able to be side-loaded in the Kindle, so it may be the same for the Fire Phone as well.  The 2400mAh battery is an acceptable size, but how the Fire Phone manages that power remains to be seen.  The device is also expensive off-contract and is only available on AT&T’s network at this point for $199 (32GB) and $299 (64GB) on a two-year contract.  Amazon is giving you a one-years’ worth of Amazon Prime free, a $99 value.

The Moto G was recently updated to add both LTE and a microSD Slot – it was already Motorola’s best selling phone of all-time in the half-year it has been around…and just when we thought Moto had done it all, they even came out with the entry-entry-level device, the Moto E.  The Moto G LTE definitely has a slower processor, but it is the updated Snapdragon 400 from last year and it does have a quad-core processor.  However, it cannot beat out its big brother, the Snapdragon 800 found in the Fire Phone.  It has a very respectable 1GB of RAM – more than enough for this type of device – but that still makes it 1GB shy of the Fire Phone.  The Moto G LTE does have a microSD card slot, which normally is a good point, however, it only goes up to 32GB and Amazon offers the Fire Phone in either a 32GB or 64GB model with no expansion, but in total, still beats out the Moto G LTE.  Motorola is not known for its cameras and this Moto does not let us down – it has only a 5MP main camera and only a 1.2MP front-facing camera.  It does only have a 2070mAh battery, but knowing what kind importance Moto puts on battery life, this is more than enough for this device.  It does run the latest Android 4.4 KitKat in almost its purest form, allowing for quick updates when Google releases them – I doubt very much if Amazon cares about updating, since its Android is draped in a heavy overlay called Fire OS v3.5.0.  At only $219 off-contract, the Moto G LTE is a true bargain of a smartphone. 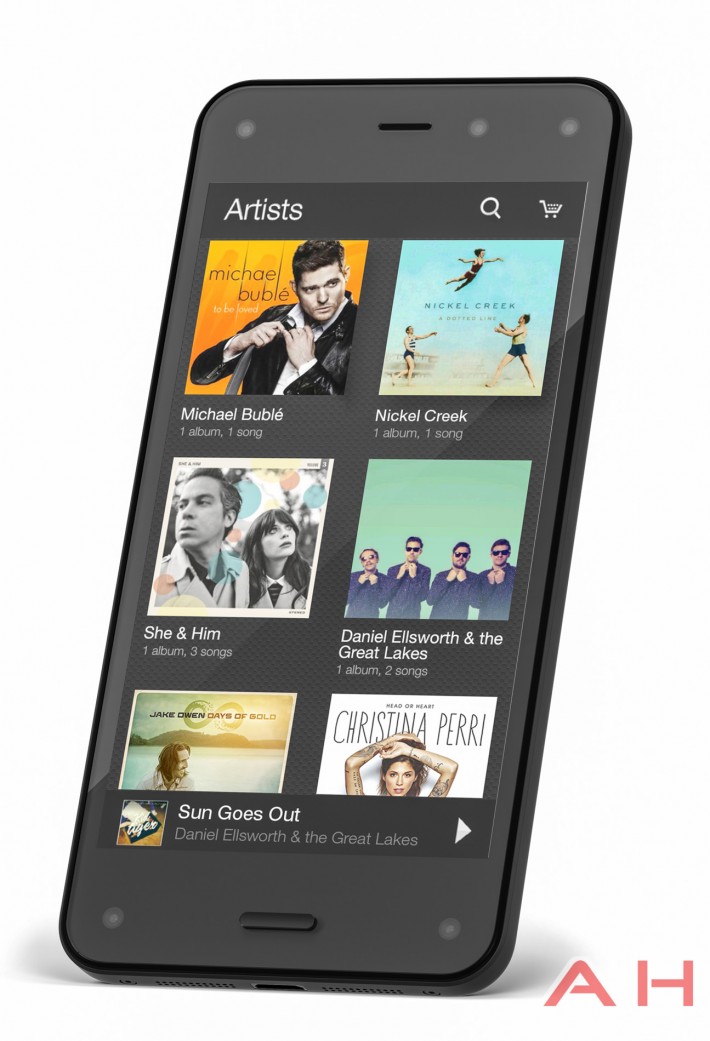 As much as I like Motorola products, the entry-level Moto G LTE just does not stack up to the Fire Phone when you compare the specifications.  Even taking into account the terrific pricing of the Moto G LTE, and you are getting a lot of value for the money, we still have to give it to the Amazon Fire Phone.  It has a faster processor, more RAM, more internal storage (so the microSD Card really does not make any difference), better cameras and larger battery, and a few unique features give it the win.

Please jump on our Google+ Page and let us know what you think about these two devices – which one would you have chosen and WHY…as always, we love to hear from you.