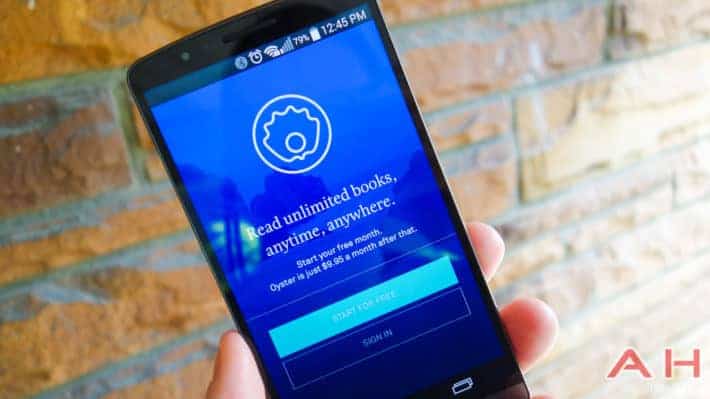 Oyster has been a pretty popular service over on iOS, Kindle Fire and Nook devices. It's basically an eBook service that allows you to read as many books as you want for just $10/month. Which isn't a bad price, especially if you read a lot of books. It has a catalog of over 500,000 books as well. So there's plenty to choose from. Oyster has now launched on Android, which should bring them a ton of other customers.

Their app does have a responsive layout which means it should look good on just about any device. Which is great since there are so many different size Android devices out there. Oyster has also brought a feature over that's unique to Android and that's the ability to turn pages using the volume rocker. Which we've seen something similar on other apps. Like Tweet Lanes back in the day, could scroll up and down using the volume rocker. It's a pretty neat concept in my opinion.

"We've also added editor's notes to hundreds of our top titles so you can get short, thoughtful reviews of the books we love (or don't). Between 100 and 300 characters, these notes are there to help you make a choice about your next book as quickly as possible. This all comes from our growing editorial team-from Huffington Post, The New Yorker, NPR, The Paris Review, Poets & Writers, and more."

Oyster is really excited to be moving to Android, and we are happy to have them here. To bad they didn't develop for Android first seeing as Android is about 80% of the market right now. But I guess it's better late than never, right? Are any of you going to give Oyster a try? Be sure to let us know in the comments below how you are liking Oyster for your eBook needs.