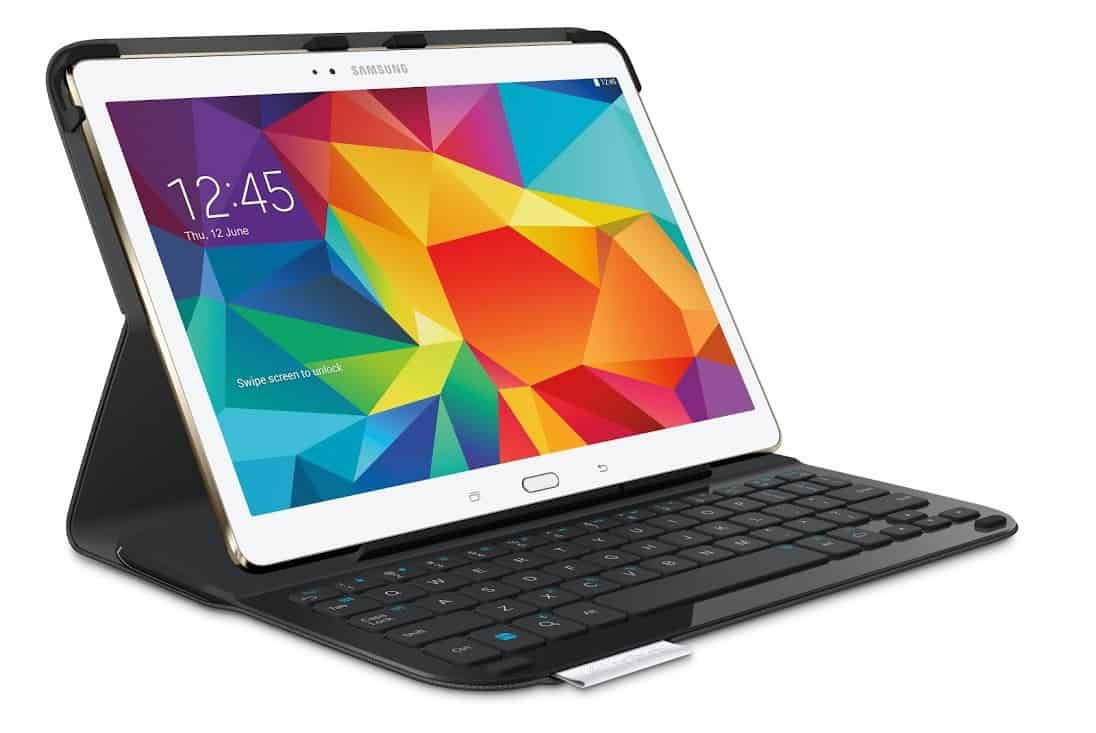 This evening, Samsung announced the Galaxy Tab S 10.5. It's complete with a 2560×1600 resolution AMOLED display, Snapdragon 800 in the LTE version or an Exynos 5420 in the WiFi version, with 3GB of RAM, 16GB/32GB of storage and a microSD card slot, and a 7900mAh battery inside. We're also looking at 8MP and 2.1MP cameras with Android 4.4 KitKat on board. This evening, Logitech also announced their new Keyboard case for the Galaxy Tab S 10.5. That's the Type-S Bluetooth Keyboard case. If this case is anything like the Logitech Pro keyboard they launched for the Galaxy NotePRO 12.2 and the Galaxy TabPRO 12.2 earlier this year, it's going to be an amazing Bluetooth Keyboard, that lasts up to 3 months on a single charge.

Logitech is launching the Type-S case later this month, and will be available in North America, Europe and select countries in Asia. The selling price will be about $99.99. For those interested, we've included the full press release down below.

Update: The Type-S Bluetooth Keyboard does not charge your Galaxy Tab S, but does have a battery built in that should last around 3 months on standby, if needed.

The New Logitech Type-S Lets you Create, Explore and Say More with your Tablet

"The new Samsung Galaxy Tab S is impressively thin and light, and we designed the Logitech Type-S with that in mind," said Mike Culver, vice president and general manager of mobility at Logitech. "The keyboard case's design complements the thin aesthetics of the new tablet, and features Android shortcuts and well-spaced keys, so typing is comfortable. It makes emailing and browsing effortless, bringing productivity on-the-go to a new level."

Precision engineered from state-of-the-art, water-repellant materials the Logitech Type-S is durable enough to help keep your tablet safe, without compromising the thinness of the Samsung Galaxy Tab S 10.5-inch. Its Essential Protection System (E.P.S.) helps protect both sides of your tablet from accidental bumps, scratches and spills. Plus, the Logitech SecureLock system's corner clips are designed to keep your tablet firmly secured in its protective case, yet easy to insert and remove.

The Logitech Type-S features a dual-view stand for multiple activities, so you can get more done – position your tablet upright to type e-mails and chat with your friends, or lay it flat to read your e-book and browse in comfort. And with the auto-wake and auto-sleep feature, your tablet is ready anytime you need it. It has a long-lasting battery that can last up to three months on a complete charge, and when it needs recharging simply plug it in with the included USB cable.

Logitech Type-S is expected to be available in the U.S., Europe and select countries in Asia beginning in June 2014, for a suggested retail price of $99.99. For more information, please visit www.logitech.com or our blog.