This afternoon, Android Police posted an article about HTC’s new 9-inch Nexus tablet, which is named the Volantis. Many of us had heard that HTC was working on a Nexus tablet with Google and even saw the device in the changelog for Android 4.4.3. Now we finally have a look at the device in all it’s glory. We even have some specs to go along with it. According to the leaked screenshot that Android Police was able to get their hands on, it has a 8.9-inch 2048×1440 resolution display, which has a 4:3 aspect ratio. Dimensions are 8.91 x 5.98 x 0.31 inches, and weighs 418 grams for the WiFi model. The LTE model weighs in at about 427 grams, probably won’t be noticeable. We’re looking at an Aluminum zero-gap construction with tapered sides here. Additionally it has the NVIDIA Logan processor, which is 64-bit, along with 2GB of RAM, 16/32GB of storage, front-facing stereo speakers and a 3MP camera on the front, 8MP on the back. What’s interesting is that the rear camera has OIS.

As far as design goes, it does look a lot like the Nexus 7 (2013) and the Nexus 5, so this looks like it’s the way that Google is going with design for the Nexus line of devices. It also has a hint of Apple’s iPad Mini in there, especially if you look at the front of the device. From what we’re hearing the 16GB model will be $399 and the 32GB for $499. There’s no word on pricing for the LTE model just yet, but it’s likely going to be around $600, as it is typically a bit more expensive than the WiFi model due to the radio.

We don’t expect to see this at Google I/O, as Android Police is quoting a Q4 2014 launch along with it releasing with Android’s L release. Which would likely be in the fall as well. That’s about all the details we have for now. Once we learn more, we’ll be sure to share those details with you. 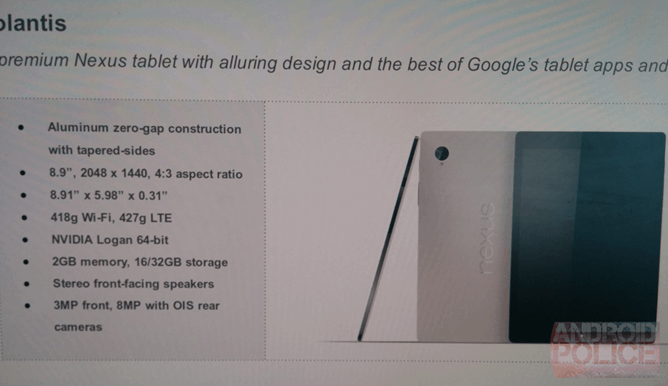