So the Android factory images are out and people have already started flashing them to their devices. The factory images are available for download for the following Nexus devices: The Nexus 4, Nexus 5, Nexus 7 2013 wifi model, Nexus 7 2012 wifi and 3G models, and the Nexus 10. If you’re someone that likes to live on the bleeding edge and has already begun the process to download and flash the factory image to your own device or devices, more power to you for being the brave people to get things going before everyone else. There will likely be stuff posted in due time about what all changes are coming to Android with this new update, but one thing we know for sure that has gotten a change is the dialer inside the phone application.

Thanks to this image from user Samuele Brancaccio on Google+, we have a nice view of what the dialer looks like on the Nexus 5. We can assume that it will look the exact same for those who are using the Nexus 4 as it would seem silly to make the dialer design device specific. This likely isn’t the only design change we’ll see with Android 4.4.3, and it has us eager to find out what else gets a face lift. From the image we can see that the dialer is now white and the numbers are blue with a darker blue bar at the bottom where the call log, phone, and settings buttons reside, so it seems that it’s taking on more of a “project Hera” like style. The previous dialer UI was a dark transparent black with light colored blue numbers and buttons, almost with more of an ICS style, or at least the colors had more of an ICS look to them. We’ll keep you posted on any new changes that come up later on, and if you’re itching to see the new changes for yourself the factory images are ready and available for you to flash. We suggest you only do so if you know what you’re doing though. 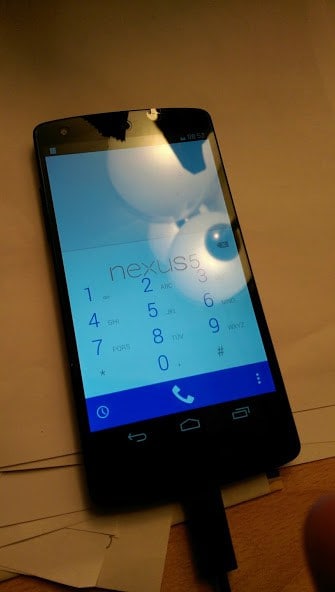