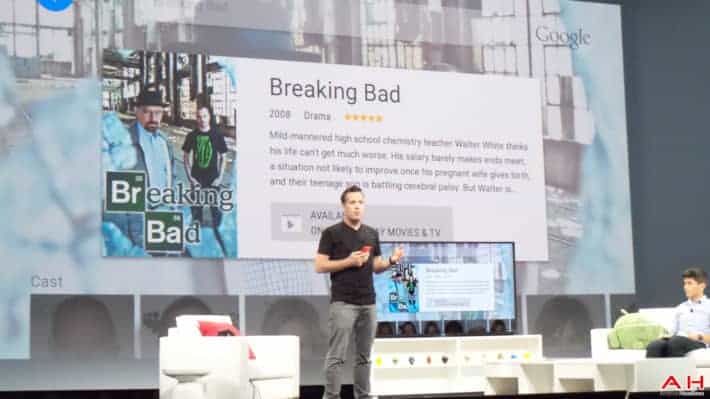 If there is one place where Google hasn't managed too much success – so far – that has to be our living rooms. Google's first foray into the television segment was the ill-fated Google TV which was launched at a Google I/O event four years ago. However, the platform did not pick off the way its younger sibling – the ubiquitous streaming dongle – Chromecast has managed to take off. It was perhaps the unprecedented success of the Chromecast as well as rival services from Amazon and Apple which strengthened Google's resolve to take this second foray into the television segment.

We had been hearing rumblings and rumors that Google was prepping a revival of their Google TV platform, however this time they were learning from their past failures and were revamping their approach to TV. The result just got announced at the ongoing Google I/O Developer conference in San Francisco today. Android TV is not just a renaming of the failed Google TV platform, instead it shines as another mode for Google to push its own video content and collections from the Google Play Store. In as much, Android TV is similar to Amazon's and Apple's offerings. However the differentiation comes in the form of Open Source innovations – which would allow streaming content from other service providers to be consumed on Android TV, in addition to live TV.

The success of Chromecast has been another addition to Android TV which would allow users to push content from other devices – including smartphones and tablets – to the TV, in true Chromecast fashion. TV features and Chromecast features aside, Android TV also entices gamers as it supports gaming consumption as well. So far it seems that Android TV would be launching sometime later this year, in conjunction with the Android 'L' release and would be on smart TVs from OEMs like Sharp and Sony, amongst others. Google has definitely covered their bases well, existing TV owners can gain Android TV benefits thanks to set-top boxes which would be coming out by manufacturers like Razer, ASUS and others. All in all, next year seems to be the year when Android would take over our TVs and living rooms as well. These are pretty exciting times indeed.

Let us know your thoughts in the comments below. You may also check out our I/O coverage, we have you covered.