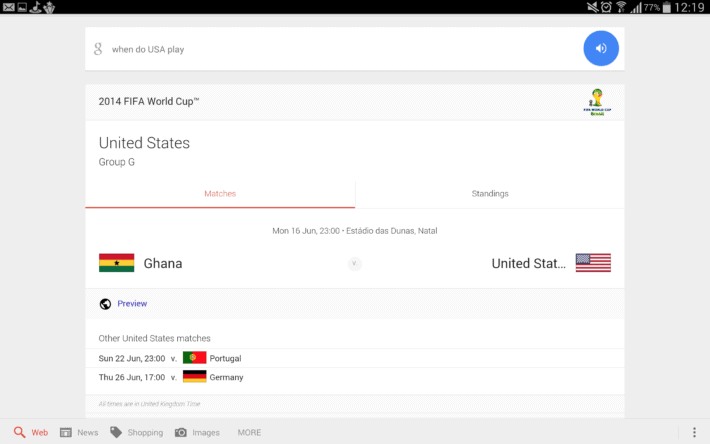 June 12 is fast approaching, and that means that the 2014 FIFA World Cup is nearly upon us. If you are like me, an avid soccer supporter, then the excitement is almost tangible and you want to know absolutely every possible detail about this major sporting event. To help with this, as it did with the Olympics, the 20/20 Cricket World Cup and Indian Premier League (IPL), Google is throwing its weight behind the Soccer World Cup 2014 by integrating the match info into its Google Now feeds.

As you can see in the main picture, saying 'Ok Google' and then asking 'When do USA play' results in the relevant card being produced on-screen and read out loud if you have the volume up, with kick-off times, group standings, stadium location as well as kick-off times of the USA's next two group matches against Portugal and Germany. On a footballing note, that's a tough group indeed.

This new card was discovered by the Reddit user, cheeto0, and so far the roll-out seems to be a little hit-and-miss, with users in the US, Hungary and the UK confirming cheeto0's discovery. Although at least one user each from the US and Croatia have said that it wasn't working for them, so make sure you've updated your Google Search app to the latest version and exercise some patience. It's worth remembering that the actual wording of the request can be a little finicky, it took me a few attempts to get Google Now to retrieve the pertinent card, with the end result of a poorly worded request 'When do USA play?'  working, while asking the more concise 'When is the US Soccer Team's first match of the World Cup?' merely results in a page of web results. For a brief display of me accessing the World Cup info via Google Now, there's a short video below.

Whichever team you support, provided they qualified for the World Cup, Google Now will be with you every step of the way. Now if only I could get Google to output the perfect algorithm for my favorite team(England) to actually win a match on penalties at the World Cup, that truly would be something. Let us know your thoughts below or at our Google Plus page.