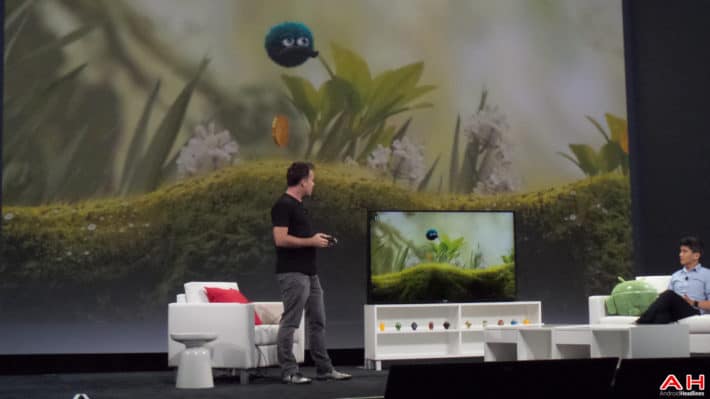 Today has been a quite eventful day. Google I/O kicked off today with a ton of new goodies for us to get our hands on. One of them is Android TV, which is providing Android a new home, right in your living room. Announced during the Google I/O Keynote, Android TV has all of the capabilities of Android, just on a much larger screen. Now Google didn't just make a TV just for watching, support for playing games will be available. Games are a huge part of our lives believe it or not. Anyone with a smartphone has at least one or two games installed. Now with the wonders of Android TV, all of your favorite games will now be on the big screen and will have full on support.

Full support huh? Yes, Android TV is going to pack a strong game support. Google Play Games will be part of this by allowing users to play with their friends online and compete on leaderboards. Also, don't worry about having to start over on games you already have, you will be able to earn achievements on games that you already have. The fun doesn't stop there. For those of you who wish to have a console experience, full support for hardware controllers will be available. How sweet is that? There isn't that gap between smartphone games and console games anymore, they're all in one now and the transition is simple and easy.

There are tons of titles for Android TV such as NBA Jam, Cordy, BombSquad, and Leo's Fortune. The list doesn't stop there, more games are in the works and will be available on release. The only question left for Googles new TV is if its . PlayStation and Xbox are the two all stars when it comes to the world of video games, does Android TV and Google Play Games have what it takes to strike a few blows? Those questions will soon be answered once Android TV hits the market. As always, leave your thoughts in the comments below, we would love to hear from you and see what you think about Android TV.