This is a really tough one for me, as I am a HUGE Samsung Galaxy Note 3 user, and there is nothing from any other manufacturer, including the LG G3, that I feel delivers what the Note 3 offers in terms of functionality – I mean the included software and available Apps that incorporate the S-Pen. If you are not an S-Pen user, then that argument goes completely out the window as a positive for the Galaxy Note 3. The U.S. version of the Note 3 is very similar to the LG G3 in terms of size and specifications – they both sport a near identical display size, 5.5-inch on the G3 versus 5.7-inch on the Note 3. The Note 3 uses the Snapdragon 800 quad-core processor clocked at 2.3GHz and the LG G3 uses the Snapdragon 801 quad-core clocked at 2.5GHz – basically a ‘geeked up’ version of the 800, although it does have a slight advantage in the graphics area, so if you are a heavy gamer or video user, the 801 model will help somewhat in that area.

They both carry 3GB of RAM on the 32GB models and they both offer a microSD card slot for adding additional internal storage – 128GB on the G3 and 64GB on the Note 3. Both use a 13MP shooter for the main camera and either a 2.1MP (G3) for 2.0MP (Note 3) for the front-facing cameras…more detail on the cameras later. Samsung has included microUSB v3.0 rather than the v2.0 found in the G3, or HTC One M8 for that matter – a big step forward in technology and I am not sure why the other manufacturers are not upgrading. The 3000mAh battery in the G3 is almost as large as the 3200mAh battery in the Note 3. The two devices are almost identical in size with the Note 3 slightly larger, although slightly thinner than the LG G3. Since the Galaxy Note 3 received its upgrade, both devices are running Android 4.4 KitKat. Because of the recent price reductions of the Note 3 – it was $299 on a two-year contract – both devices are about the same price and found on all major U.S. carriers…surprising how similar the LG G3 and Galaxy Note 3 really are.

Please take a look at the specifications found below and then we will explore what differences there are in the two devices, and from there we shall have to pick a winner in this LG G3 versus Galaxy Note 3 comparison. 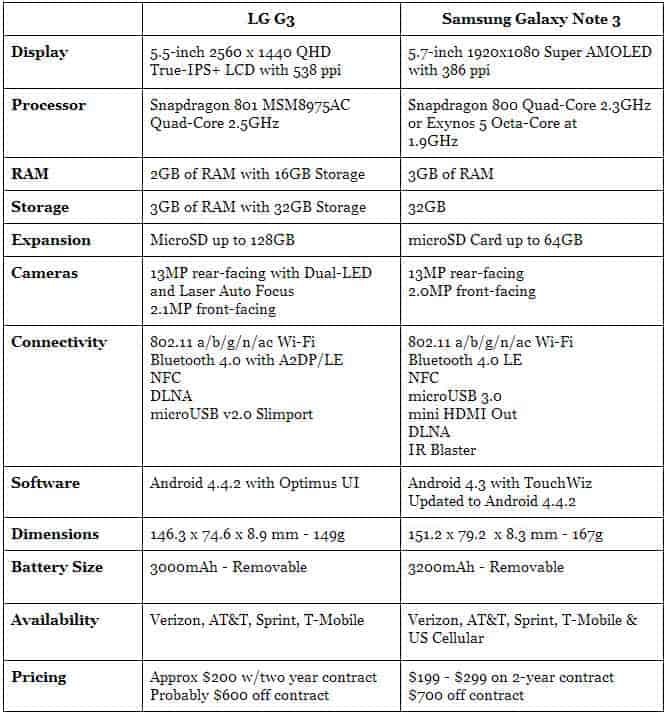 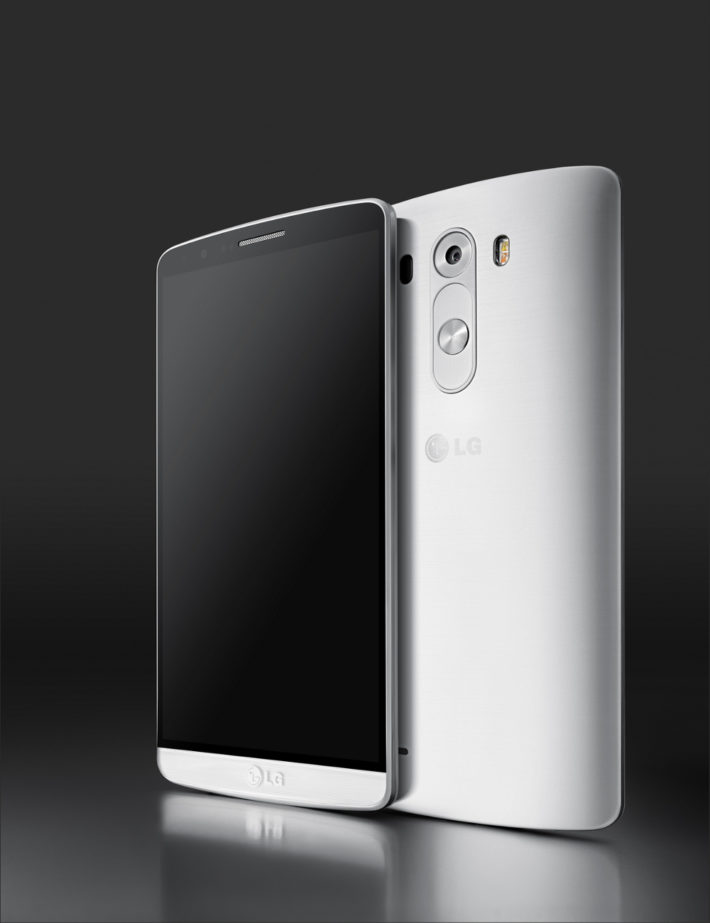 First we will look at the new LG G3 – and it is quite a ‘looker.’ LG kept the plastic body (polycarbonate, like the Note 3), curved the sides and back, and then coated it with a ‘metallic’ finish that really looks like metal – it will be interesting to see how well it holds up against scratches and dings. The BIG news is in the 5.5-inch QHD display that has a resolution of 2560 x 1440 and a whopping 538 pixels-per-inch. The other big news comes in the 13MP camera improvements – they now use an OIS+ system for increased stability and incorporated a laser auto focus system for faster focusing. LG has kept the volume/on/off buttons on the rear of the device, as well as a single rear-mounted speaker, although it has been improved by using a 1-watt amplifier for a louder and clearer sound than its predecessor, the G2. The Snapdragon 801 used in the LG G3 is the same one used in the Samsung Galaxy S5 – it is an overclocked Snapdragon 800, found in the Note 3, and both processors are a fine workhorse for these devices. Prices were not announced, but we expect it to be around $200 on a two-year contract or about $600 or so to purchase outright when it becomes available in the U.S. later this month. 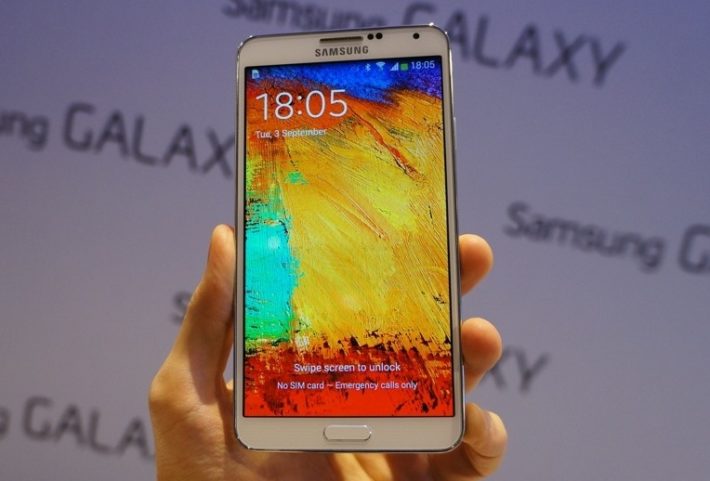 The Samsung Galaxy Note 3 was released back in November, yet it holds itself pretty accountable to the new – not even for sale yet in the U.S. – LG G3. Because of their release times, the Note 3 is always a step ahead of the past Galaxy S device -the S4, in this case – and slightly behind in some areas of the newest device – the Galaxy S5, in this case. The Note 3 is the only ‘true’ Phablet defined in my dictionary – it really does combine a mobile phone and the usefulness of tablet-like features, along with software that allows you to take a quick or detailed note, grab a quick screenshot and draw on it, manipulate photos with photoshop Apps, flip photos over to ‘write’ on the back, draw items from a simple stick figure to a real work of art thanks to the Wacom Digitizer display, and stores its own S-Pen in a silo on board the device. I am not convinced that a Phablet is any mobile phone with a screen size over 5-inches…to me, it is simply a phone with a big screen.

The microUSB v3.0 is a great addition that really does decrease the recharging time immensely and makes for much quicker data transfer. The inclusion of an IR Blaster is a nice addition – I cannot tell you how many times the remote for the TV was across the room and I just used my Note 3 and Samsung’s WatchOn app to control my viewing (no wonder I need to exercise). The combination of the features on my Galaxy Note 3 makes it more than a smartphone…it just seems to be in a category all its own. All of those abilities did come with a high initial price tag of $299 on a two-year contract, but with recent price breaks, it will cost you about the same of the LG G3.

LG G3 – I told you this was a real struggle for me and I am not sure that I made the correct choice – I would love to have a QHD display, but I would not give up my Galaxy Note 3 for the LG G3  – the G3 offers a sexier look and the QHD display and a better camera, but I personally, would not trade those items for the functionality of my Note 3 – but that is me, and to be impartial, I have to overlook my feelings (although it does not mean that I cannot express them, lol). The LG G3 is an awesome device – it has a smooth and beautiful design, with the best that it can offer at this time – the QHD display being the most impressive addition over the other devices available, including the Note 3. The 801 processor is really nothing to get excited about – a solid performer, but then so is the 800 found in many devices – however the 801 is still the best out there. The other area where the G3 is better than the Note 3 is in the camera department with OIS+, dual flash and the laser auto focus – Samsung needs to do more than add 3MP for each new rendition. So there you have it – looks, display, and camera – are better than the Note 3. I like the bottom mounted speaker on the Note 3 better, and the microUSB v3.0 is a clear winner. The capabilities of the Note 3 far outweigh the LG G3’s, but this is 2014 and the G3’s pluses are what is in vogue right now…although I cannot wait to put the LG G3 up against the Galaxy Note 4…but that will be another day and another comparison.

Please join us on our Google+ Page and let us know what you think of these two devices…as always, we would love to hear from you. PLEASE, both Samsung and LG lovers, let us keep it civil – we are all entitled to our own opinion, but are not entitled to name calling!