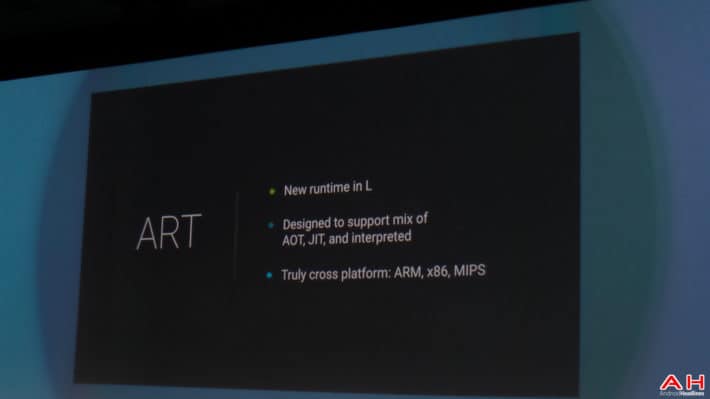 We heard this rumor leading up to Google I/O and now it's official. Android L will run on ART and not have a choice for Dalvik. ART was released in KitKat last fall and was a very early beta. Google has taken feedback from Developers since KitKat and have improved ART and will be rolling it out with Android L this fall with the latest version of Android. ART stands for Android Runtime and uses an ahead of time compiler instead of a just in time compiler. Making it faster to open up apps, and even battery life should be better.

ART is also 64-bit compatible and developers don't have to do anything to get their app ready for ART or 64-bit. Which is music to a lot of people's ears, right? ART also brings a bunch of GPU updates and stability improvements. We're looking at basically having PC quality graphics on our Android devices with Android L and ART as our runtime. Google used Unreal 4 for the demo and man did it look good. I'm definitely excited fro Android L to be released this fall.

Android L will be available later on today and will have factory images for the Nexus 5, for those with the Nexus 5. ART is definitely going to bring us faster devices with better battery life which will be great. Rest in Peace Dalvik, we used you for years, but now it's ART's time.