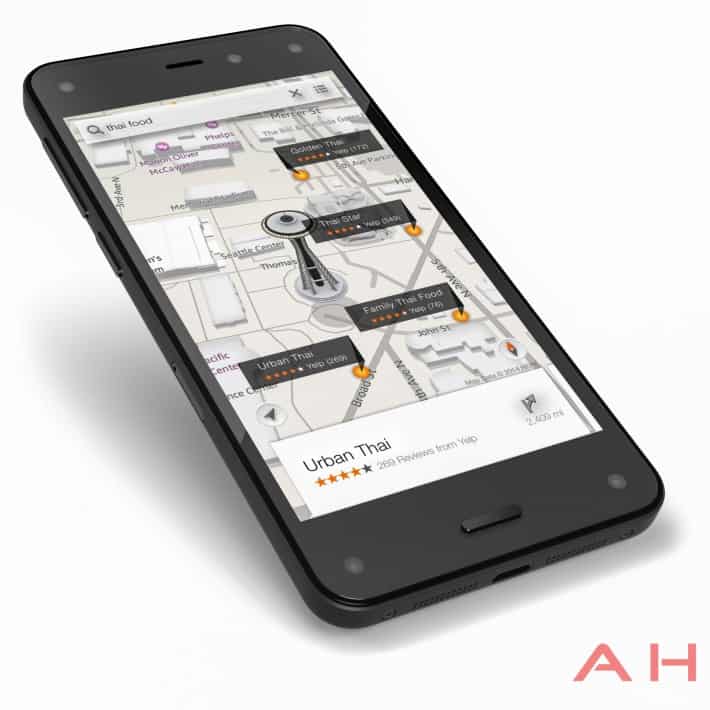 The long awaited and longer rumored Amazon smartphone was finally revealed today – the Amazon Fire Phone – and to nobody’s surprise, especially running Amazon’s Fire OS over Android, it looks and acts a lot like a Kindle Fire tablet. Whether this will turn out to be a good thing, only time will tell – is there really any room for a smartphone made by Amazon with the likes of Apple and established Android manufacturers already dominating the market. One can argue that it ties in very nicely to Amazon’s ecosystem, but the question still remains – is anybody that much of an Amazon ‘junkie’ that they would need their smartphone to tie into that system?

At an event in Seattle, CEO Jeff Bezos unveiled the Fire Phone – a smartphone with a 4.7-inch IPS LCD 3D display, powered by a Qualcomm Snapdragon 800 processor clocked at 2.2 GHz quad-core processor and 2GB of RAM with either 32GB or 64GB of internal storage.  It sports a 13MP main camera and many cameras on the front.  It looks a lot like a Nexus device with a little iPhone thrown in for good measure. The device is currently an AT&T exclusive, but they are enticing you by giving you a free one-year subscription to Amazon Prime – a savings of $99.  The Fire Phone will cost you $199 on a two-year contract for the 32GB model and $299 for the 64GB version.  The Fire Phone is available now for pre-order on Amazon’s website and they expect to start shipping on July 25.

Like Amazon’s Kindle Fire, the Fire Phone is designed to work with the many Amazon services.  Netflix, HBO, ESPN and Amazon’s own Prime Video services as well as their on-demand music service are all available on the device and of course reading material.  A new service called FireFly will also be on the new phone – this is Amazon’s database of over 100 million items and FireFly will allow you to scan all kinds of objects and Amazon will find where you can purchase it from their store, of course…kind of a one-stop shopping.

It will be easy to navigate through the Fire Phone menus if you are familiar with the Kindle Fire.  You have a standard grid of icons and the trademark Fire OS recent content carousel.  You can pin Apps, Music, Books, and other content to your carousel and use gestures to accomplish many tasks.  Amazon’s own applications follow their usual three-panel design.  One of the Fire Phone’s most unique features has to be its four cameras placed on the front of the phone to track a person’s head – although dubbed “Dynamic Perspective” – it offers a real-time 3D display.  This more ‘in-depth’ look will be nice when shopping for items to get a better ‘view.’  Like Bezos says, “Fire Phone puts everything you love about Amazon in the palm of your hand.”  I thought you held a tablet in your hand as well? Please hit us up on our Google+ Page and let us know what you think about the new Amazon Fire Phone – is there a real need for one or will the device itself create its own need…as always, we would love to hear from you.