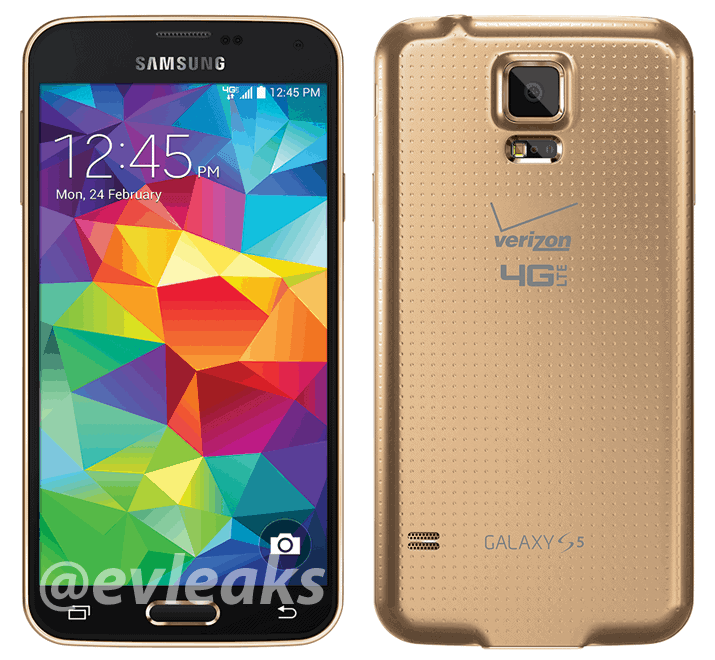 Since launch Verizon Wireless customers have been stuck with just two color options, black and white.  Color options for phones have been a pretty big thing with customers. Of course you have the Apple iPhone 5c that comes in 5 different colors (yellow,green blue, pink, and white). HTC Came out with the HTC One m7 in multiple colors. Now when the Samsung Galaxy S5 was announced earlier this year, Samsung had announced that the device would be coming in four colors, white, blue and gold (or copper as they called it). However at launch only white and black were available.  Looks like Samsung is getting ready to give us the other color options that they told us all about!

The folks over at evleaks have gotten their hands on some images of the Verizon Samsung Galaxy S5 in Gold! As you can see in the image about, the entire back and side of the Samsung Galaxy S5 is cover in gold. Along with the back, the home button/ fingerprint sensor has a gold trim around the button.  To me this looks pretty nice, I have been personally carrying around a white Galaxy S5 and wouldn't mind rocking this device.  I really like how the back speaker is also cover in gold, as you can see in the picture above.  I think it would be pretty cool if the Samsung logo on the front was also in Gold, but hey I am just a writer!

We haven't heard anything from the Verizon camp of when we will be seeing this hit store shelves, but I am pretty certain we will not be waiting too long to see it.  Now of course we are still waiting to see where the Blue Samsung Galaxy S5 will be available. Hopefully all colors will be available from all carriers around the world, however I don't think we will be so lucky. There has to be an exclusive somewhere. Let us know in the comment section below, what you think of the gold Galaxy S5!