Samsung is working on a lot of different projects. In addition to smartphones, smartwatches, TVs, and everything else the giant company does, they are working on a Google Glass competitor. We first heard about these glasses in October of last year. That rumor stated that we could see Samsung’s smart glasses in April or May of this year. May is almost over, so that’s not very likely to happen. But Samsung is still working on them, and they just filed a trademark application in Korea for them.

According to the trademark application, Samsung is going to be calling these glasses the ‘Gear Blink’, no ‘Gear Glass’ and we had previously heard. They could be pitting them head to head with Google Glass, but we’re not likely to see them until IFA 2014 in Berlin this upcoming September. Samsung has unveiled the Galaxy Camera, Galaxy Note, and the first Galaxy Gear at previous IFAs in Berlin. 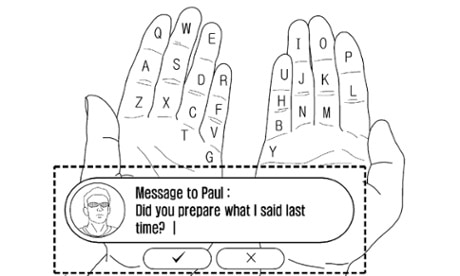 Samsung’s patents for the Gear Blink are for both regular style glasses, and an ear mounted option that looks like something out of Dragon Ball Z. They also have a patent for a virtual keyboard that can be projected onto a user’s hands, allowing them to type in mid-air or on any surface they choose. That concept is pretty neat. We just don’t know how well it will actually work.

Samsung’s regular style smart glasses could be designed more for sports and outdoor activities, too. The design is more conducive to sports glasses; while the ear mounted option would not be sturdy enough for rigorous activity but could be more comfortable to wear for long periods of time.

Samsung has lots of technology related to our eyes already built in to their current Galaxy line of devices. Samsung’s suite of Smart apps let users scroll through text and keep their screens on using just their eyes. These apps have progressively gotten better since Samsung first rolled them out. It makes us a bit excited about what Samsung will bring to the table with the Gear Blink.

How about you? Does the Gear Blink pique your interest?