This year, when Samsung launched the Galaxy S5, they introduced a device that was waterproof and dustproof, without the associated bulk or compromise that come with it. Much like Sony'x Xperia Z line, the Galaxy S5 is able to withstand spills and even submersion without looking any different to a regular smartphone. Since the launch of the Galaxy S5 though, we've been hearing rumors of an "Active" variant of the device, much like we saw last year with the Galaxy S4 Active. However, we're unsure as to why Samsung would need to introduce such a device as the Galaxy S4 Active's main draws are already in the Galaxy S5.

Still, it seems that such a device is heading to market and that the device in question is to be a more rugged device that can withstand bumps and knocks as well as just water and dust. Recently, a Samsung device with a similar model number and similar specs has been spotted in AnTuTu's benchmarking database. The SM-G906A has been seen running Android 4.4.3, a much rumored update to KitKat coming soon, along with similar specs to the Galaxy S5, like a 5.2-inch Full HD display and a Snapdragon 801 clocked at 2.5 Ghz.

The Galaxy S5 Active has been rumored to have a model number of SM-GM870 before, so there's a chance that this isn't the Active, but whatever it is, it's another variant of the Galaxy S5, or perhaps another device with the same internals. Nevertheless, Samsung is holding an event shortly, where we're expecting the Galaxy Tab S line of tablets to be unveiled, but could we be seeing something else, too? With the Galaxy S5 Prime and Galaxy S5 Active both rumored to be launching soon, it looks like Samsung is looking to have more high-end devices on sale throughout the summer than normal. Could this be the better compete with LG, or to simply solidify their dominance in 2014? Let us know what you think in the comments below. 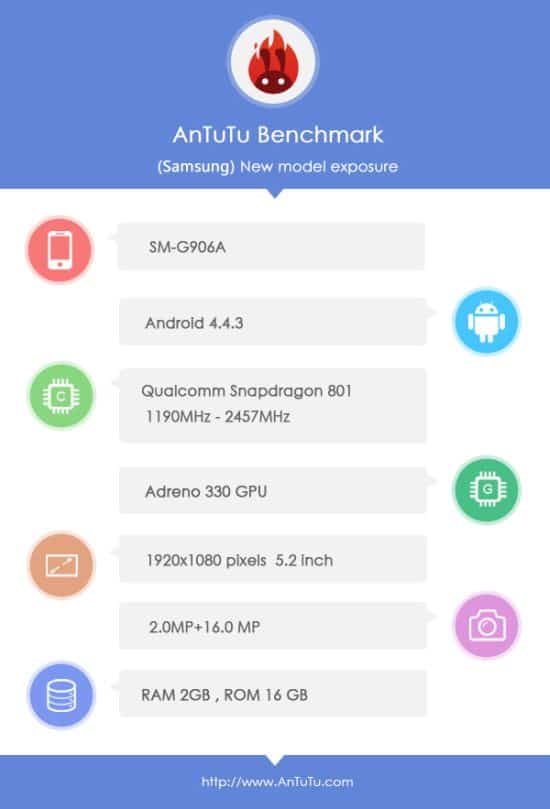