Here is a comparison of the newly released Samsung Galaxy S5 and the Nokia Lumia 1520 Windows Phone released exclusively to AT&T in November.  What is arguably the best Windows Phone up against the best that Samsung has to offer should make for an interesting comparison.  Most users, Android included, have always liked the Nokia design and quality that they build into a device and I shudder to think what shape Nokia would be in today had they chosen the Android OS over the Windows Phone OS.  Putting the software aside for the moment, there are a few similarities between the the Galaxy S5 and the Lumia 1520 – they both use a Snapdragon processor, the 800 clocked at 2.2GHz in the Lumia 1520 and the newest 801 clocked at 2.5GHz in the Galaxy S5…not really too much a difference, but is will show up in gaming or video playback that is memory intensive. They both have 2GB of RAM and they both offer a 16GB version – the Galaxy S5 also has a 32GB version with expandable another 128GB with a microSD card. The Lumia 1520 also offers a 32GB version, but not in the U.S. and the device also has a microSD slot for adding up to 64GB of internal memory.  The Lumia 1520 trades off the Galaxy S5's IR Blaster for an FM Radio. Both devices cost the same amount, although the Lumia 1520 is only available on the AT&T network, and both devices are made from polycarbonate. 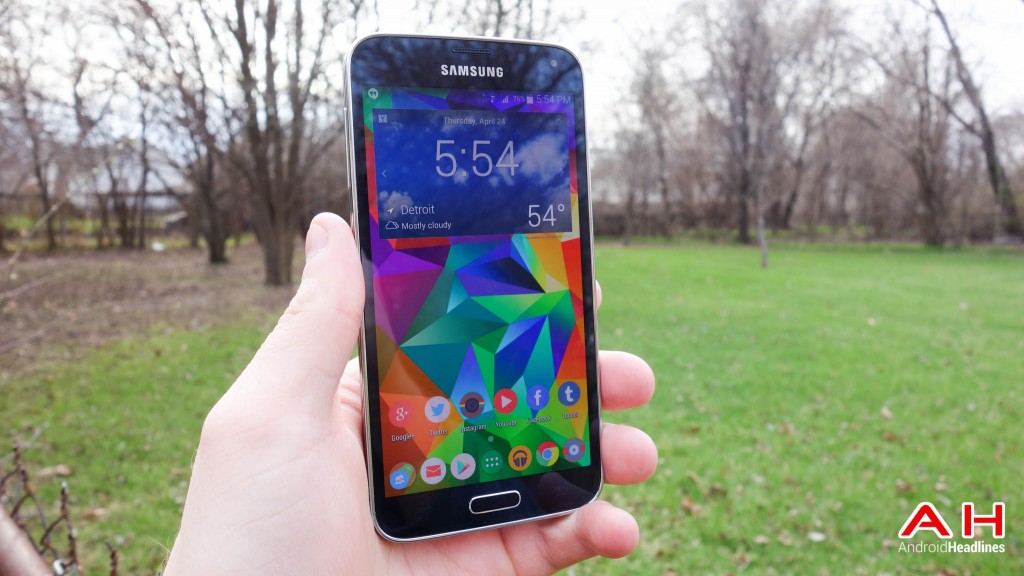 Samsung's Galaxy S5 has had its share of criticism, however, now that the reviewers have gotten their hands on it, they seem to be giving it some love. It has a gorgeous 5.1-inch display (the best Samsung has made), slightly smaller than the 6-inch Lumia 1520 and the Snapdragon 801 quad-core clocked at 2.5GHz, a slight upgrade over the older Snapdragon 800 found in the Lumia.  Both devices have a microSD card slot – the Galaxy S5 lets you use up to 128GB versus the 64GB on the Lumia.  The cameras do differ quite a bit – the S5 uses a 16MP main camera that takes beautiful pictures, but is not quite up to par with the Lumia 1520, however, the S5 wins in the front-facing camera area with 2MP versus only 1.2MP – which is surprising in a smartphone of this caliber why they would put anything less than 2 megapixels. The Galaxy S5 will be much easier to handle with its smaller size and lighter weight – some of which is due to the S5's 2800mAh battery versus the larger Lumia's 3400mAh. One HUGE difference is the operating systems where the Galaxy S5 has the most popular OS in the world – Android – versus the Windows Phone 8, which accounts for only a little over 3-percent of all smartphones. The Galaxy S5 is also available on all major U.S. networks and the Lumia is only on AT&T.

The Nokia Lumia 1520 is the Windows Phone Phablet with a 6-inch display – topping out the Galaxy S5's 5.1-inch display.  Although a Phablet, there is no on-screen drawing with either a stylus or a pencil – size is all you get.  It has a great processor in the Snapdragon 800, but not quite as fast as the 801 in the Galaxy S5.  The 20MP main camera is a definite plus and the Lumia is known for its great photos.  Reviewers felt it lacked some of the features found in its big phone rivals; however, it was a good buy for those that want a Window's Phone.  The phone, though constructed out of polycarbonate, is well designed and solid to the touch.  The large 3400mAh battery will get you through a day, but so will the smaller 2800mAh on the Galaxy S5.  The Lumia 1520 is available only on AT&T in the U.S. and sells for $199 on a two-year contract.

The Nokia Lumia 1520 has a beautiful 6-inch display and a great camera, but the Galaxy S5 has those too, as well as the Android OS and that is the one thing that throws the Galaxy S5 into the the winner's circle of this comparison. The S5 may not have as good of a camera, and a slightly smaller screen, but it has the better processor, larger storage capacity, great multitasking ability, a more usable size for the majority of customers, a fingerprint scanner for added security, a Heart Rate Sensor for those who love to exercise during use, and terrific battery management hardware and software, and a much larger library of applications from the Google Play Store or Samsung's own applications. The Nokia Lumia 1520 is a great Windows Phone – but in this case, we have to go on the strength of Android.

Please jump on our Google+ Page and let us know what you think of these two devices and which one is your favorite…as always, we would love to hear from you.

Trusted By Millions
Independent, Expert Android News You Can Trust, Since 2010
Publishing More Android Than Anyone Else
3
Today
3
This Week
377
This Month
377
This Year
101872
All Time
Advertisement